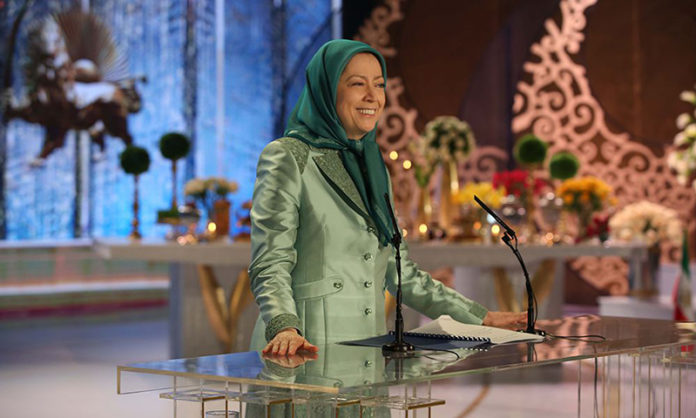 Here, we will look at the first part of her speech, where Maryam Rajavi noted that she and the rest of the Iranian Resistance stood with the people of Iran during this time of incredible struggle, especially those rising up to overthrow the mullahs.

Maryam Rajavi began by congratulating all Iranians across the world, especially the families of martyrs, the resistance units, the Iranian Resistance members and supporters, and political prisoners, on the Persian New Year.

Maryam Rajavi praised the Iranian people for the year of uprisings, something that she called for in the last New Year’s speech, and congratulated them for every step they took towards freedom and liberty.

Maryam Rajavi said: “[Last year] was the year of the expansion of resistance units when the strategy of 1,000 Ashrafs and the army of freedom shined brighter than ever in our occupied homeland. [Our] uprisings and popular protests shook the pillars of the regime.

The policy of appeasement failed, and the mullahs were deprived of one of their main sources of support for clinging on to power.” Indeed, there were thousands of strikes, protests and demonstrations in at least 700 cities and towns.

She said: “Happy New Year to the people of Iran who refused to lose hope even under the oppressive and dark rule of the mullahs.”

Maryam Rajavi advised that over the New Year period, many Iranians are going without food due to extreme poverty that affects over 80% of the country and the droughts that are hitting Iran’s farms and destroying crops.

She said she was proud to stand with Iran’s workers, farmers, and teachers, who are “discriminated against and humiliated”, “forced to live under the poverty line”, and “imprisoned for their legitimate protests”.

Maryam Rajavi said: “We stand, with all our passion, aspirations and determination to continue the struggle, alongside women and children who are perishing in poverty without any support and shelter and under repressive conditions in the impoverished shantytowns surrounding all major cities.”

She also took the time to remember the 120,000 martyrs of the Iranian Resistance who have been killed by the mullahs since the Regime took power, as well the political prisoners executed over the past year.

Maryam Rajavi said: “Our warmest salutations to you, the heroes, whose names are sung every day in the crimson-coloured anthem of freedom.”
But the fight is not over yet, so Maryam Rajavi called for a bigger uprising this year in order to overthrow the regime. She said this year “will be the harbinger of storms and change”.