However, this is not the case. During Rouhani’s first term in office, he presided over more than three thousand executions. He deceived world leaders and the people of his own country. He presided over numerous test-firings of ballistic missiles. He advocated cruel and inhumane punishments for petty crimes. He ordered crackdowns on dissent. He allowed the suppression of the people.

Now that he is president for another term, he is on a path of no hope when it comes to the Iranian Revolutionary Guard Corps (IRGC). During the nuclear deal negotiations, Rouhani made several concessions that will not be forgiven or forgotten by the IRGC. And neither will the fact that the IRGC does not want any transparency in the economy as suggested by Rouhani.

For the people of Iran, Rouhani completely failed during the first four years in office. The people are still living in poverty and social conditions have not improved. Young people are still faced with high levels of unemployment. Getting increasingly fed up, the Iranian people are making their dissent heard more than ever, and the Iranian regime, the IRGC, Rouhani and the Supreme Leader, despite their differences and the internal disputes, have this one huge fear in common.

Rouhani, even though he is president, has very little control when it comes to foreign policy matters. This is determined by the Supreme Leader who uses the IRGC to realise his goals. Because the IRGC receive orders from the Supreme leader himself, it will never hesitate to challenge Rouhani. In fact, the IRGC has already vowed to ignore Rouhani’s wishes to improve relations with the West.

So Rouhani who was up against Raisi in the elections is now up against the IRGC. And this is another situation where nether could be described as the lesser of two evils. They are both, quite simply, evil. Neither have the interests of the people in mind. 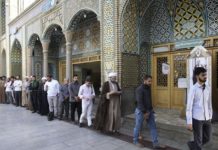