On October 10, Iranian diplomat Assadollah Assadi, who had been arrested during a foiled bomb attack, threatened Belgian authorities about possible retaliation by unidentified groups if he is found guilty, Reuters revealed according to a police document.

On June 30, 2018, Assadi was arrested in a coordinated operation between Belgian, German, and French law enforcement in German soil. At the time, he was the third counselor at Iran’s embassy in Vienna. German police detained Assadi while he was returning from Luxemburg, where he had transferred and delivered 500g of explosive material TATP and a detonation device to an operative couple under a diplomatic coverage.

Due to Belgian authorities’ appeal, Germany extradited Assadi to Belgium to be tried along with Amir Sa’douni, Naimeh Nomani, and Mehrdad Arefani, who had previously been hired and trained by Assadi to implement the terror attack. These men and woman were supposed to bomb the annual gathering of the Iranian coalition opposition National Council of Resistance of Iran (NCRI).

Since the Islamic Republic regime was established in 1979, Iranian authorities frequently targeted dissidents. Based on a fatwa issued by the first supreme leader Ruhollah Khomeini, members of Revolutionary Guards (IRGC), intelligence and security forces, and all the government’s employees are obligated to remove the enemy of Islam.

Later, Khomeini made crystal-clear his purpose, and in 1988 he explicitly ordered his thugs to execute all members and supporters of the opposition People’s Mojahedin Organization of Iran (PMOI/MEK). Following Khomeini’s fatwa, judicial officials and prison guards, including the current judiciary chief Ebrahim Raisi and Justice Minister Ali Reza Avaei, massacred over 30,000 political prisoners, mostly PMOI/MEK members and supporters, across the country.

Furthermore, the ayatollahs have misused Iran’s embassies to mastermind and implement terror attacks and espionage missions across the globe. In 1994, the regime used diplomatic coverage to bomb AMIA building in Buenos Aires. Later in France, Germany, Netherlands, Iraq, Albania, and many countries, Iranian embassies played a crucial role in terror attacks against foreign citizens and exiled opponents.

In sensitive cases such as Iraq, the IRGC-Quds Force appoints the Iranian ambassador, and the Ministry of Foreign Affairs does not interfere in the country. In this respect, Iraqi protesters frequently demand to shut down the Tehran embassy in Baghdad and expel IRGC Quds Force commander Iraj Masjedi—Iranian ambassador for Iraq. Notably, Assadollah Assadi used to be the third counselor in Baghdad before deploying to Vienna.

Who Is Assadollah Assadi, the Iranian Diplomat on Trial for Terrorism Charges?

In fact, Assadollah Assadi was pursuing Khomeini’s fatwa as the mastermind of a terror attack against the PMOI/MEK members and supporters, this time in Paris. This is shown Iranian terrorists do not recognize geographic borders and as the IRGC spokesperson Abolfazl Shekarchi recently said, “We [IRGC forces] are dedicated to preserving the Islamic Republic ‘ideological’ frontiers.”

The Iranian regime ensures its survival through oppression and aggression. It has established numerous extremist groups across the Middle East under different names, but with a similar purpose, serving the ayatollahs. Now, jailed diplomat plays with this card to terrify Belgian authorities from the consequences of fulfilling justice.

“Armed groups in Iraq, Lebanon, Yemen and Syria, as well as in Iran, were interested in the outcome of his case and would be ‘watching from the sidelines to see if Belgium would support them or not,’” Assadi told police.

“According to ASSADI Assadollah we (Belgium) do not realize what is going to happen, in the event of an unfavorable verdict,” the minutes, taken by the Belgian police, say.

These facts flagrantly indicate Assadi’s role in the foiled terror plot despite his previous denials. Instead of compiling a defense, Assadi threatened judicial to rescue himself. This is the hostage-taking nature of the Iranian regime that began in 1979 by seizing the U.S. embassy in Tehran and continued by aggressive steps in all these 41 years. The hostage-taking government of Iran not only has imprisoned, tortured, and killed many Iranians inside Iran and abroad but also obviously threaten the lives of foreign nationalities.

In this respect, Iranian dissidents argue that the international community is obligated to take firm and practical steps against the terrorist regime in Iran. As the first step, the EU must suspend all relations with the ayatollahs and shut down Iranian embassies across the European soil. Assadollah Assadi, as an Iranian senior diplomat, well proved the fact that Iranian embassies play a leading role in exporting terrorism and making chaos in other countries. Now, Europe must opt between their citizens’ lives and security on the one hand and appeasing an outdated regime that has the blood of hundreds of thousands of innocent people in the Middle East, Europe, and as far away as Canada on its hands.

Albanian Police Arrest Another Iran Agent for Spying on MEK 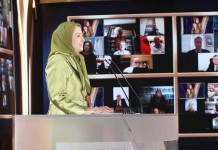 In 1979, the mullahs, led by Ruhollah Khomeini, took Iran and its people hostage following a grassroots, people-led movement to depose the monarchy, where...
Read more
Terrorism

These days, the Iranian regime has expanded its tentacles around the world, particularly on the European soil, targeting dissidents. The case of the so-called...
Read more
Terrorism

Albanian Police Arrest Another Iran Agent for Spying on MEK

The Albanian police revealed on Saturday that they had arrested an Iranian intelligence agent for spying on the People’s Mojahedin Organization of Iran (PMOI/MEK), in...
Read more
Go to mobile version