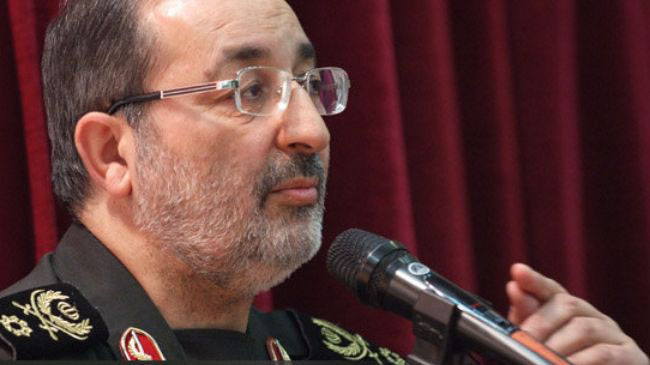 Jazayeri’s remarks late on Saturday did not provide details on the assistance that mullahs’ regime could give Nouri al-Maliki regime.

“Iran has told Iraqi officials it is ready to provide them with our successful experiments in popular all-around defense, the same winning strategy used in Syria to put the terrorists on the defensive … This same strategy is now taking shape in Iraq – mobilizing masses of all ethnic groups,” he told the television station.

“A response is certain and serious,” he said. “With Syria, too, we announced we would not allow terrorists in the hire of foreign intelligence services to rule and dictate to Syrian people. We will certainly have the same approach with Iraq.”

The Iranian regime has spent billions of dollars propping up its ally, the Syrian dictator Bashar al-Assad.

The help for Bashar al-Assad has included hundreds of military specialists, including senior commanders from the elite Quds Force, the external and secretive arm of the IRGC, according to Iranian sources familiar with deployments of military personnel, Syrian opposition sources and security experts.

Meanwhile, a former senior commander of the Revolutionary Guards Corps (IRGC) said on Thursday that now third Basij force which he described as third child of the Iranian regime in the regime is being born in Iraq.

Major General Hossein Hamedani, said on May 4: “Today, 130,000 trained Basij forces [repressive paramilitary forces] are waiting to enter Syria. Today we fight in Syria for interests such as the Islamic Revolution. Our defense in Syria is to the extent of the Sacred Defense (term used by the regime officials to refer to the Iran-Iraq war of 1980’s).”