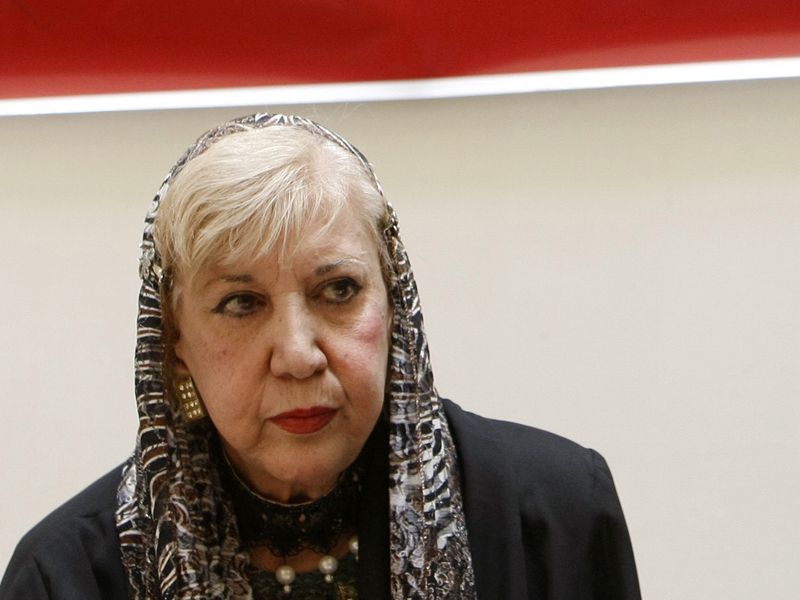 (Reuters) - Poet Simin Behbahani, a champion of women's rights and free speech whose lyrical verse captured the hopes and disappointments of Iranians since the 1979 revolution, died on Tuesday at the age of 87, official media reported.

Nominated for the Nobel Prize in Literature, she earned the unofficial title of the "Lioness of Iran" for what admirers saw as her courage in the face of official censorship.

After nearly two weeks in the Tehran Pars hospital, she died of heart and respiratory complications, according to state news agency IRNA. She was nearly blind towards the end of her life.

"Until now, I've said what I've had to say, I've always said I'm against death, I'm against killing and I'm against imprisonment," she told the BBC's Persian service in 2012.

She voiced strong opposition to the practice of stoning, a rarely used form of capital punishment. Under Islamic law in force in Iran since the revolution, adultery may be punished by death by stoning, while crimes such as murder, rape, armed robbery, apostasy and drug trafficking are all punishable by hanging.

Behbahani added her voice to those of the demonstrators who rushed into the streets after a disputed presidential election in June 2009 to protest against alleged ballot rigging, by writing the poem "Stop Throwing My Country To The Wind".

She encapsulated the hopeful and later deflated moods of contemporary Iran after the revolution, using a 1,100-year lyrical form of poetry known as the ghazal.

"It's an amazing index of those yearnings, and aspirations and disappointments following the revolution," Dr. Ahmad Karimi-Hakkak, a friend of the poet and director of the Roshan Center for Persian Studies at the University of Maryland, said of her work.

On one occasion in the late 1990s, she was to speak at a poetry session, but security forces took away her microphone, turned off the lights and made noises in order to silence her.

"That didn't deter her, she just stood there reading her poetry out loud without a microphone while her supporters protected her," remembered Karimi-Hakkak.

At 82, on March 2010, her passport was confiscated as she tried to board a plane to Paris for a poetry reading. Security forces questioned her and ultimately let her go, but she was unable to attend the conference.

Despite the difficulties of living in Iran, she received her inspiration from her homeland and chose not to emigrate.

"She loved Iran and despite the many opportunities she had to go live abroad, she stayed," said a friend and editor of a compilation of her poems, Ali Dehbashi, from Tehran.

"She was tied to the land and her biggest fear was that she would die while abroad."