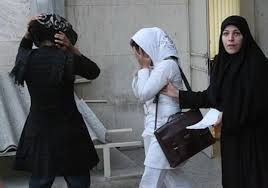 But Ebrahim went on to say that conditions have actually been deteriorating for women in spite of the cosmetic appearance of progressive change, and that “som of the most repressive legislation in the history of the Islamic Republic has been put forward in the past two years.” This includes a strict gender segregation initiative that was launched last summer, as well as pending legislation called the Plan to Promote Virtue and Prevent Vice, which would empower the nation’s Basij militia to confront people in public for violations of religious law, thus helping to reverse the trend toward more relaxed dress.

The introduction of this legislation was widely blamed for a series of acid attacks on women centered around the city of Isfahan last October. In March, the International Campaign for Human Rights in Iran published a paper detailing this allegation, titled, “Vigilante Violence: The Acid Attacks in Iran and the State’s Assault on Women’s Rights.” The organization stated that the Iranian parliament’s plan constituted a “clear and present danger” to the continued safety of women throughout the country.

But this initiative is part of a broader conservative crackdown, apparently aimed at reversing the surface-level improvements in women’s freedom that have been brought about by popular pressure and that were observed by Ebrahim in her more recent trip. On Tuesday, the International Campaign quoted Seyed Shahabeddin Chavoshi, Tehran’s Deputy Governor for Political Affairs as saying “Ninety percent of our youth have distanced themselves from Islam today by virtue of our political conduct.” Chavoshi urged religious hardliners to reassert the dominance of Islamic law and morality.

These sorts of comments are motivating factors behind the latest efforts by the Basij – the civilian militia under the control of the Iranian Revolutionary Guard Corps – to assert control over aspects of Iranian society. Specifically, the Basij has announced plans to operate some 2,000 day care centers throughout the country, or approximately 25 percent of all child care centers in the Islamic Republic.

According to the International Campaign, “The move reflects a growing preoccupation with what is perceived by officials as Iranian youths’ lack of interest in conforming to strict hijab and general Islamic values.”

Indeed, the Basij commander, Mohammad Reza Naghdi was quoted as criticizing the Iranian Ministry of Education in 2013 for inadequately promoting conservative dress, at which time he urged a “militaristic approach” to rectifying this situation.

In addition to using childhood education as a pathway to spreading hardline values, the Basij and the regime authorities also utilize their extensive control over and influence upon the media toward achieving the same end with a more general audience.

IranWire criticized some of the effects of conservative media narratives in an article on Friday regarding the social alienation and sometimes aggressive disapproval or exploitation faced by people, particularly women, who choose to live alone in the Islamic Republic.

The article points out that “some hardline media and authorities equate the term ‘home for a single person’ with a ‘place of depravity, debauchery, drug addiction and crime.’” These same media and authorities are responsible for spreading the myth that, in the words of one divorced 33 year-old Iranian woman, “women only care about their virginity and when they’ve lost it, they’ll have intercourse with anyone.”

IranWire points to the anecdotal experiences of some women who have lived alone in Iran to suggest that this mentality has led to a high incidence of attempted rape by landlords and neighbors. Indeed, critics of strict Islamic dress codes often point out that such restrictions appear to be predicated on the idea that male sexuality cannot be controlled unless women are covered up and kept from view.

But rising rates of divorce, relaxed dress, and Western influence are facts of life in today’s Iran. IranWire concludes its article by arguing that the media, especially the state controlled media must recognize some responsibility to accommodate this new reality and protect women through means other than veiling and segregation. But the ongoing crackdown of which the Basij child care centers are the latest example suggests that the hardline authorities remain fixated instead on reversing the tide of social change.