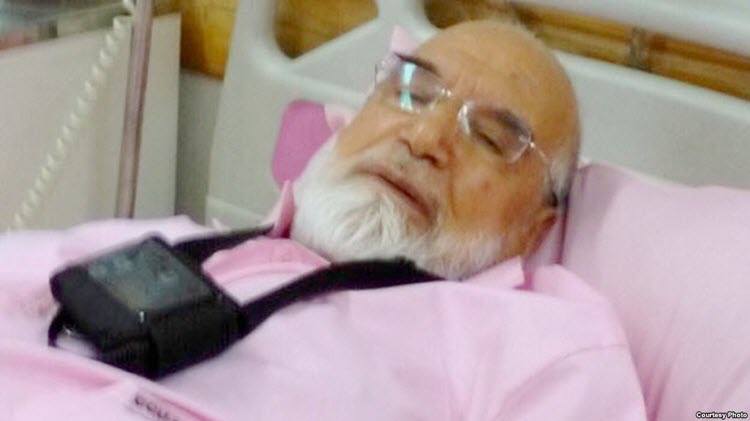 In 2013, following Ahmadinejad’s second term in office, a surprisingly successful campaign was launched by Hassan Rouhani, with the release of the rival faction leaders as one of its talking points. Despite Rouhani’s victory, his administration took no recognizable steps to secure the release of these political figures. Still, the same promise was reiterated in Rouhani’s reelection campaign in May, before being quickly undermined by the president’s own public remarks following his reelection.

Rouhani’s inaction may be a motivating factor behind the decision of the 79-year-old Karroubi to launch a hunger strike. The reformist cleric suffers from heart disease and has been hospitalized during the six years he has been kept under armed guard inside his home. A further motivating factor may be the rash of reports about other hunger strikes being carried out by political prisoners in facilities across the country. Such protests are a time-tested tradition in Iran, but recent actions have seemingly grown both in their scope and their severity, with some hunger strikes lasting upwards of two months and garnering substantial attention both domestically and internationally.

However, the breadth of this attention and the willingness of Iranian citizens to launch protests in support of the hunger strikes has also prompted authorities to crack down on persons who have announced hunger strikes or their intention to begin them. Thus, Karroubi’s announcement may open him up to additional pressures or arbitrary punishments, including the denial of potentially life-saving medical treatment – a strategy that is known to be used frequently by prison authorities and the judiciary.

The persistence of the crackdown on actual and would-be hunger strikers was made clear on Wednesday by the Center for Human Rights in Iran. The organization reported that more than 50 political prisoners in Rajai Shahr Prison have been transferred into harsher conditions and stripped of their personal belongings. At the same time six hunger strikers were moved into solitary confinement in Rajai Shahr Prison. In precious cases, such isolation has arguably been used in order to prevent the outside world from receiving verified information about the health condition of the prisoners, which could incite the sorts of widespread protests that have sometimes compelled authorities to publicly address the cases.

This raises the possibility that the regime will strive to undermine Karroubi’s hunger strike by cutting him off from access to the internet and other forms of communication. And this possibility was perhaps made to appear more likely by another CHRI report, this one concerning the overall crackdown on the internet and free expression in the Islamic Republic. Also on Wednesday, the CHRI reported that President Rouhani’s choice for his second-term Minister of Information and Communications Technology has been directly linked to the suppression of the uprising in 2009.

At the time, Mohammad Javad Azari Jahromi was working with the Intelligence Ministry and was reportedly identified as an interrogator by some of the people who were arrested for their peaceful demonstrations. Although Jahromi now denies such direct participation in the Intelligence Ministry’s crackdown, he has proudly acknowledged overseeing the development of technological infrastructure responsible for widespread surveillance that continues to this day, evidently in violation of Iranian law.

This account of Jahromi’s past record is a further indication of Rouhani’s swift betrayal of his reformist reelection campaign. In his campaigns for both his first and second terms, he promised greater freedom of expression in Iranian society, but did not subsequently speak out against efforts by regime authorities to expand restrictions on the internet and social media, or to arrest and prosecute people for peaceful demonstrations or social behavior declared to be un-Islamic or otherwise undesirable.

The CHRI’s description of Jahroni also comes after the release of statements by the National Council of Resistance of Iran and other opponents of the regime, criticizing Rouhani for appointing Alireza Avai as the head of the Ministry of Justice. The previous occupant of that position, Mostafa Pourmohammadi, came under fire for his declared role in the 1988 massacre of political prisoners, which was largely aimed at destroying the leading opposition group, the People’s Mojahedin Organization of Iran. But while Pourmohammadi was one of four members on the Tehran “death commission” that determined which detainees would be hanged, Avai played a virtually identical role in Khuzestan Province.

The recent appointments of Avai and Jahromi, along with the more general fact that all appointees are Shiite Muslims and men, have been cited as bad signs for the prospect of reform under Rouhani’s second term. This, in turn, bodes poorly for the prospect of Karroubi or Mousavi being released or even avoiding further punishment in the wake of actions like the newly announced hunger strike.