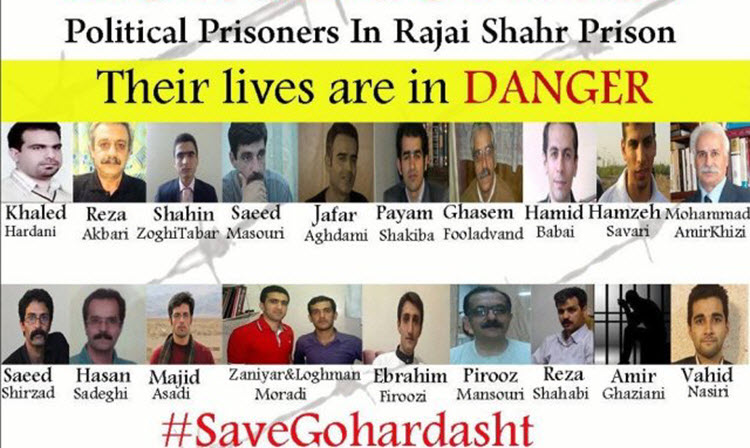 Since the initial protest began, various other current and former political prisoners have shown solidarity either by directly joining the hunger strike, by launching their own, more limited hunger strikes, or by speaking out publicly about the situation. The CHRI report notes that 20 former political detainees at Rajai Shahr sent an open letter to the Iranian judiciary emphasizing that the hunger strikers are demanding basic human rights and that those demands should be acknowledged by prison authorities.

However, the same report points out that the authorities’ response to the protest has instead consisted of almost complete neglect. As has been reported by various outlets for weeks, the authorities have denied access to medical treatment for nearly all of the participants in the hunger strike. As the CHRI puts it, these authorities are essentially acting as if the protest is not happening, while also helping to reinforce the position of Tehran prosecutor Abbas Jafari Dowlatabadi, who described this and other hunger strikes as “threats” to which the judiciary would not “surrender”.

But in addition to ignoring the physical plight of the hunger strikers, the prison has also sought to foster internal conflict by expanding the number of family visits for prisoners not participating in the hunger strike while blocking such visits for those who are. Not only have the families of hunger strikers been barred from visiting their loved ones, they have also been prevented from delivering medications to replace those that were confiscated at the time of the transfer.

Such actions compound the effect of the withholding of medical treatment, and they also point to the tendency of Iranian authorities to arbitrarily strip targeted individuals of civil and political rights as a further pressure tactic. Both of these trends are on display in the case of Alireza Rajaei, who has been in the news recently as a result of his losing an eye and part of his jaw to surgery that was made necessary by cancer that went undiagnosed for as much as four years while he was incarcerated as a political prisoner.

Rajaei was the focus of an IranWire feature on Monday, which detailed not only the consequences of withheld medical treatment but also the other ways in which Iranian authorities conspired to ruin his life as punishment for his political dissent. When Rajaei ran for political office in 2000, the votes that he received were invalidated by the Guardian Council, which is tasked with vetting all political candidates and legislation for compliance with the supreme leader’s vision of Islamic law. After being arrested the following year, Rajaei was not only sentenced to four years in prison, he was also explicitly stripped of his civil rights and banned from membership in political organizations for 10 years.

The IranWire feature quoted the country’s Islamic Penal Code as saying, “The court, in addition to its judgment, may punish the person who is convicted…by depriving him/her of social rights, or forbid him/her to reside in certain places or force him/her to reside in certain places, for a period of time.” But in Rajaei’s case, the authorities seem to have also exceeded the letter of the law, as by harassing his wife to exert additional psychological pressure on him. The article also quotes Iranian lawyer Musa Barzin Khalifehloo as saying, “when it comes to political cases, the judiciary tends to act politically and to guard the interests of the dominant power against its critics, instead of observing the laws.”

Indeed, the law technically bars prison authorities from withholding medical treatment, but this is a tactic that is widely utilized against political prisoners. In order to do so, those authorities often reject the advice of independent physicians who say that inmates are in imminent need of hospitalization. This was the case with Rajaei, whose constant pain and other symptoms were recognized as cancer risk signs on multiple occasions, only to be treated by the prison clinic with handfuls of painkillers.

A similar situation appears to be playing out currently in the case of Nizar Zakka, a Lebanese citizen and permanent resident of the United States who was arrested in 2015 after attending a conference on women and sustainable development, to which he had been invited by an Iranian official. His case is widely cited as an example of Tehran’s crack down on Western nationals and persons with connections to the West, many of whom have been sentenced to long prison terms on the basis of poorly substantiated accusations of espionage. Last month, 10-year sentences were upheld for Zakka and three US citizens.

Now, the Center for Human Rights in Iran reports that Zakka is in serious need of medical treatment, which has been refused by no less an authority than the director of Evin Prison, where Zakka is housed alongside dozens of other political prisoners. The CHRI quotes Zakka’s American attorney Jason Poblete as saying, “Even the people at the prison clinic are saying that he needs treatment outside the prison, but the director says no.”

Poblete went on to say that he believed the reason for the refusal of this transfer is in order to guard against criticism, in keeping with Khalifehloo’s characterization of the regime’s general behavior in such cases. Although Poblete could not disclose the exact nature of Zakka’s health crisis, he did indicate that it had not developed until after his imprisonment and subsequent mistreatment. “Frankly they don’t want anyone photographing him” he said. “They don’t want outside doctors to diagnose him and find out what’s wrong with him.”

Other reports indicate that while Iranian authorities are wary of transferring sick or injured prisoners to hospitals outside the prison walls, they have no such hesitancy about transferring political prisoners back into the harsh conditions of those facilities after they have been hospitalized. In the past, many political prisoners and their advocates have complained of their being returned to prison prematurely, before they could fully recover or even receive adequate treatment. Additionally, although periods of medical furlough are supposed to count toward total amounts of time served, many prisoners are ordered to return to prison, sometimes without warning or explanation, by authorities who believe that furloughed prisoners have not received sufficient punishment.

On Wednesday, Iran Human Rights Monitor reported upon the case of Mahmoud Beheshti, a labor rights activist and spokesperson for the Teachers’ Association. Beheshti has been repeatedly arrested for his organizing activities, and most recently was sentenced to five years in prison for “colluding against national security” and “spreading propaganda against the state.” But he was released from prison last year on medical grounds, as allowed by Iranian law, after his health deteriorated greatly in the wake of a 22-day hunger strike.

Since that time, hardline authorities have repeatedly threatened the labor organizer with the resumption of his sentence, but when the prosecutor’s office ordered him to return to prison at the end of August he refused, arguing that the order was illegal. This week, Beheshti was arrested in his home and forcibly returned to prison to resume a sentence that had been legally suspended. When persons who have been granted medical furlough are returned to the Iranian prison system, the facility’s conditions are often sufficient to cause their health to deteriorate further, and of course this situation can be made worse by deliberate mistreatment or the denial of access to medical care.

And a Danger to All

This danger is also an immediate threat to people who are threatened with new arrests, as well as to those who are ordered to resume existing sentences or who have existing sentences arbitrarily extended. Lengthening existing sentences is also a familiar means of punishment, and the Center for Human Rights in Iran recently reported that this was the situation facing the activist Soheil Arabi, whose seven and a half year sentence may be doubled as result of new charges being brought against him by the Iranian Revolutionary Guard Corps, following his previous conviction for posts made on Facebook.

Arabi was initially sentenced to death before the media attention given to his case led to the judiciary commuting the sentence upon appeal. The IRGC likely views the current punishment as inadequate and the hardline paramilitary enjoys sufficient influence over judicial authorities to expand the case against him, as well as to bring charges against his wife.

Although medical issues have not been identified in reporting on Arabi’s case, they are familiar to various other cases of political imprisonment, including one that was highlighted by Iran Human Rights Monitor on Wednesday. According to that article, a labor rights activist named Ali Nejati has been summoned to serve a six month sentence, the latest of several sentences that have been handed down against him. His imminent return to prison poses a particular danger because the 55-year old activist has experienced worsening heart disease and recently underwent surgery.

Iranian law allows for judges to suspend convicts’ sentences if it is believed that imprisonment will pose a threat to their life or health. But in practice, this authority is rarely invoked and when it is, it is often overridden by hardline authorities who are more concerned with meting out punishment and limiting prisoners’ ability to bring broad attention to abuses.