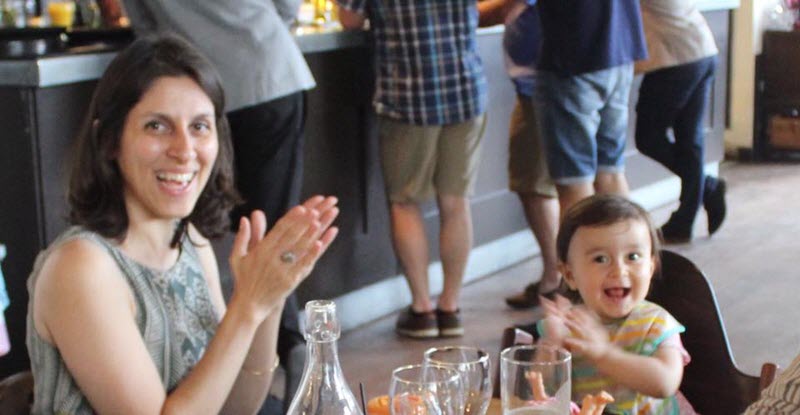 Buzzfeed News published a report on Tuesday dealing with this impact of Johnson’s resignation. It noted that the British Member of Parliament representing the district in which Zaghari-Ratcliffe lived prior to her arrest has already sought out a meeting with Mr. Hunt. The request included stark criticism of his predecessor’s “failure” with regard to this case. The MP, Tulip Siddiq, noted that Johnson had “actively damaged” the case last November when he mistakenly suggested that Zaghari-Ratcliffe had been “training journalists” in Iran at the time of her arrest in April 2016.

In fact, Zaghari-Ratcliffe had been visiting family after traveling to Iran with her then 22-month-old daughter, Gabriella. The child’s passport was confiscated and she has since been in the care of her Iranian grandparents. All efforts to secure a visa for Nazanin’s husband and Gabriella’s father Richard Ratcliffe have been refused by Iranian authorities. Furthermore, the Buzzfeed report notes that when Gabriella turned four last month, her mother was arbitrarily denied temporary release to visit with her, despite having previously secured permissions from all relevant authorities.

The report quotes Richard Ratcliffe as saying that such mistreatment serves as a reminder of the fact that his wife is not a normal prisoner but rather a political pawn. The notion that she had been training journalists originated with hardline Iranian authorities as a means of characterizing her as part of an “infiltration network” working toward the “soft overthrow” of the Islamic Republic. But although Zaghari-Ratcliffe was previously employed by the BBC, she worked only for its charitable wing, later moving to the Thomson Reuters charitable foundation, and never worked in a journalistic or training capacity.

Despite Boris Johnson having badly misspoken on this topic, there was some expectation that the case was moving forward under his tenure. It had previously been reported that his office was considering providing Zaghari-Ratcliffe with formal diplomatic protection, leading to more support from the government. But now Buzzfeed reports that whereas a final decision had been expected this week, it may be delayed for some time. And this fact is made more serious by Richard Ratcliffe’s statement that his wife “can’t wait much longer” for conclusive intervention on her case.

She is not alone in this regard, and the departure of the British Foreign Secretary is not the only complicating factor in efforts to secure the release of dual nationals from Iran, including citizens and dual nationals of the UK, other nations of Europe, and the United States. As the New York Times noted on Tuesday, Iran is known to currently be holding 14 such individuals, having detained at least 30 since 2015, around the time of negotiations between Iran and six world powers aimed at swapping sanctions relief for restrictions on the Iranian nuclear program.

The Times repeated these figures in the context of an in-depth report focusing on one of the currently imprisoned Americans, Princeton graduate student Xiyue Wang. The same report examines the larger phenomenon of Iranian hostage taking, its long history, and the difficulties faced by each American president including the current one in managing the challenge of securing detainees’ release without emboldening malign Iranian behaviors.

Richard Ratcliffe has repeatedly highlighted his belief that the Iranians intend to use his wife to extract concessions from Western adversaries, and the Times report indicates that Wang’s wife Hua Qu has come to the same conclusion about him. At one point, she sought to have his case handled by the government of his native China instead of the United States, only to find that Tehran refused and subsequently continued to focus on the prospect of releasing Wang in exchange for Iranians detained in the United States, particularly those who have been charged with violating sanctions that target the Islamic Republic.

Interestingly, this commitment was underscored on Tuesday, the same day as the Times and Buzzfeed reports, when the Islamic Republic News Agency conveyed a statement from the Iranian Foreign Ministry to the effect that it would use all available means to secure the release of Iranian nationals detained on the basis of what it called “illegal” and “illegitimate” sanctions. Foreign Minister Javad Zarif even went so far as to parrot criticisms of the Islamic Republic and attempt to turn them against the US, which he accused of taking hostages for ransom.

Meanwhile, the Times report provides substantial detail about the frivolous nature of the cases that Iran has filed against dual nationals. Xiyue Wang, for instance, was accused of spying for the State Department by obtaining documents from Iranian archives, even though the documents in question were more than a century old, leading one Princeton colleague to observe that if he was spying, “he was spying on the dead.” Furthermore, the Times quotes one political analyst as repeating a familiar criticism of the Iranian regime: that hostage taking is a “fundamental” component of its policies, both foreign and domestic.

While such policies may rob figures like Zaghari-Ratcliffe and Wang of ever larger portions of their lives, domestic political prisoners face a greater risk of losing their lives altogether. As one example, Radio Farda reported this past weekend upon the escalating threats faced by Ramin Hossein Panahi, an Iranian Kurd accused of taking up arms against the Islamic Republic and convicted in a trial that has been widely condemned for its lack of due process and for the refusal to acknowledge clear signs that Panahi had been tortured in detention.

The report notes that this prisoner’s death penalty has been upheld and prison authorities have repeatedly declared that either it will be upheld or he will be killed in prison. The mention of this latter option presumably reflects concerns that public attention to Panahi’s case, including attention from international human rights organizations like Amnesty International, may slow or stop the process of implementing the capital sentence. Although this goes to show that hardline officials are prepared to act unilaterally in defense of the regime’s strategies of hostage-taking and political imprisonment, it also suggests that foreign entities can play a meaningful role in defending the human rights not only of Western nationals but also of native Iranians who languish alongside them in the prisons of the Islamic Republic.