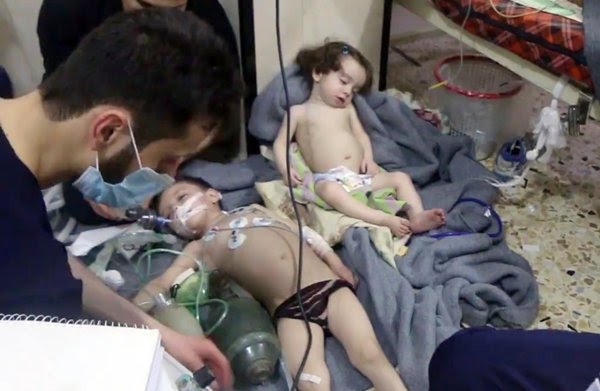 The harsh criticism of the Iranian regime is typical of the White House’s tone since Trump took office last year, whereas the inclusion of Russia appears at odds with the President’s early expressions of interest in working with his Russian counterpart to resolve tensions between the former Cold War adversaries. It remains to be seen whether the current flare-up over contrasting visions for Syria threatens that reconciliation project over the long term. But if it does, it may encourage Russia and Iran to gravitate closer together, in the context of mutual antagonism of the US and its Western allies.

The chemical attack on the Syrian rebel-held town of Douma took place after last week’s meeting in Ankara between representatives of the Turkish, Iranian, and Russian governments intended to establish an agreement for a political solution to the Syrian crisis. Various reports regarding that meeting suggested that it was indicative of expanding relations among the three intervening questions, even though questions lingered as to whether those relations would have any bearing on the substance of a trilateral agreement.

Although Turkey, alongside the US, backed pro-democracy rebels at the height of the Syrian Civil War, the government of President Recep Tayyip Erdogan has lately become fixated on confronting the Kurdish forces that have been empowered by the war and are purportedly affiliated with separatist groups inside Turkey. Meanwhile, President Trump has expressed interest in pulling out of Syria altogether, a potential move that Russian media described as an acknowledgement that Russia and Iran now control the future of Syria.

Some reports indicate that Trump already asked for the 2,000 US troops in Syria to be removed, but was dissuaded by his advisors, who alluded to the need to plan for the safety of those troops during the pullout. His eagerness on this point has opened the president to criticism from some of his own supporters, who fear that the lack of an American presence would allow the worst Iranian influences to proliferate, thereby enabling further chemical weapons attacks as well as other measures aimed at destroying moderate rebel groups in their entirety, to clear the way for the Assad regime to retain power in perpetuity.

Tehran has been described as being far more committed to such a course of action than Moscow. Accordingly, Iranian-backed forces have been blamed for violations of previous ceasefire agreements that were negotiated among Iran, Russia, and Turkey and then consistently enforced by Russia.

Whereas Russian military establishments in Syria could theoretically be secured even in Assad’s absence, Iranian fortunes in the country are more explicitly tied to the ruling family. To the extent that Iran-backed militias have taken precedence over the Syrian military in the past few years, Syria has been drifting ever closer to the status of a satellite state serving Iran’s well-recognized imperial ambitions. And prominent among those militias is the longstanding proxy for Iran in Lebanon, namely Hezbollah.

This situation makes the Iranian role in Syria especially concerning to Israel, which further complicates Trump’s position on full withdrawal. This was the focus of an article published by NBC, which described the apparent Israeli strike on Syria that took place on Monday. The article quotes Iranian hardline cleric Ahmad Khatami as saying that Hezbollah’s capabilities have reached the level of being able to raze Tel Aviv and Haifa. And although this is certainly a rhetorical exaggeration, it underscores NBC’s observatio

that unchallenged Iranian influence in Syria is a “nightmare scenario” for America’s foremost ally in the Middle East.

Although Israeli officials did not comment on Monday’s strike, it was presumably intended to send the message that the Jewish state will act unilaterally to prevent further expansions by Iran and Hezbollah. According to Iran’s own media, three Iranians were among the 14 individuals killed in the strike. A series of Israeli strikes in February also destroyed Iranian targets in Syria, following a reported incursion into Israeli airspace by an Iranian drone.

The White House reportedly responded to the strike only in order to acknowledge that Israel had contacted Washington before launching it, and to add that the US is not engaging in any similar actions. It was, however, not immediately clear how the administration would respond to further such actions, or whether the threat of them would impact Trump’s views on the removal of American troops.

Whether or not the White House moves forward with that plan, it seems very likely that current developments in Syria will help to further sharpen the lines of division between allies and adversaries of the Islamic Republic of Iran. In a reversed mirror image of the Trump administration’s admonishment of Russia, Iranian President Hassan Rouhani took the opportunity on Monday to welcome a representative of the Russian Assembly and to urge the continued expansion of Iranian-Russian relations.

While Rouhani’s comments made reference to a number of different fields of endeavor, they also identified the Syrian Civil War specifically and said that cooperation between Assad’s two chief supporters should continue there until “full security” is established. Iran’s own Mehr News Agency reported upon the meeting and suggested that the Iranian president has also highlighted the potential for Russian-Iranian cooperation to be expanded so as to include other countries in and around the Middle East.

Intentionally or otherwise, such reporting recalls attention to longstanding warnings about Iran’s imperial ambitions and, more broadly, to concerns about a possible “eastern bloc” focused on Iran, Russia, and China, and dedicated to countering Western interests on a global scale.

Russia and China, notably, are members of the P5+1 group of nations that negotiated the 2015 nuclear agreement with Iran, and they have been representing the interests of the Islamic Republic in that area. The other members – the US, Britain, France, and Germany – have been negotiating over potential means for addressing Trump’s demands to “fix the flaws” in the agreement in order to prevent him from re-imposing sanctions or formally halting American participation in the Joint Comprehensive Plan of Action.

On Monday, Rouhani reiterated Iranian threats of retaliation against any such action by the United States. At a ceremony for Iran’s Atomic Energy Day, at which 83 supposed domestic “achievements” in that field were unveiled, Rouhani said that Iran’s nuclear tech has developed at a faster pace since the nuclear deal, making the country capable of enriching uranium to the 20 percent level on short notice. Al Jazeera noted that one representative of the Atomic Energy Organization of Iran even put the timeline for this enrichment at just two days.

Trump and other opponents of the nuclear deal hope to restore international leverage over Tehran to elicit more concessions. But Iranian officials have variously claimed to be preparing for the loss of Western business and the return of sanctions, by attempting to expand their political and economic relations in other areas of the globe, including, of course, Russia and its non-Western allies.