The coronavirus crisis is only getting worse in Iran, with regime officials predicting the fifth peak soon, something that is unheard of in the rest of the world, as state media reports a marked increase in the number of cities labeled as ‘red’.

The Khabar Online wrote last Friday: “The charts forecast bad news about the Covid-19 outbreak in Iran. For the second week in a row, the prevalence of coronavirus in the country has increased.”

This was the same day that Health Minister Saied Namaki said that 32 cities were declared red because of the high number of hospitalizations.

This is the result of not only the regime’s policies throughout the entire pandemic – refusing to close businesses and provide financial assistance being one example – but also a monstrously slow vaccine rollout because the mullahs said they didn’t trust US and UK-made vaccines that had gone under rigorous testing and had already been given to many Westerners, including the heads of state in those countries.

A few weeks later, they began to roll out a domestic vaccine, which does not have approval from the World Health Organisation, but this is not enough, not least because there are fears that this vaccine may not work or, as Deputy Health Minister Farid Najafi wrote, it could be dangerous. The regime has since relaxed the ban through an arbitrary distinction between the Oxford and Pfizer vaccines made in the UK and US and those made in other countries.

Furthermore, unlike in most other countries, Iranians are being made to pay for the vaccine, with the Food and Drug Administration chief Kianoush Jahanpour saying that the Barakat vaccine is 200,000 Tomans. When people quite rightly protested because the majority of Iranians live in poverty, Jahanpour mocked them on Twitter, but he has not been admonished by other regime officials, not even Namaki who is his boss.

The Arman daily wrote: “Paid vaccination comes at a time when statistics show that Iran’s performance is not good compared to other countries, and even Pakistan has been able to vaccinate six times more than Iran’s population.”

The regime recently announced that Supreme Leader Ali Khamenei is going to receive his first vaccine, but the truth is that he and other officials were vaccinated months ago. Former president Mahmoud Ahmadinejad admitted this on May 10 but refused to say what country the vaccines came from, indicating that the mullahs did not get the domestic vaccine but probably received the very vaccines that they said were unsafe.

The Iranian Resistance said: “[Despite this] Khamenei took this silly gesture of being “vaccinated” by the domestic vaccine to promote it and sell it to the poor people of Iran.  His intention of promoting this vaccine is that his huge financial institutions and the IRGC are behind creating and selling these vaccines.”

The state-run Hamshahri daily wrote about the poor condition of the coronavirus vaccine: ‘Field studies indicate that the second dose of the elderly vaccine continues to be in poor condition.’

‘Reports indicate that many vaccine applicants wait in long queues of 5 to 15 hours, profiteers take ‘turns selling’, and some groups wait in the car the day before to receive the vaccine and sleep there overnight. According to reports, the sale price of the ‘turn’ has reached 300 to 600 thousand tomans.’ (State-run daily Khabar Fori, June 28, 2021) 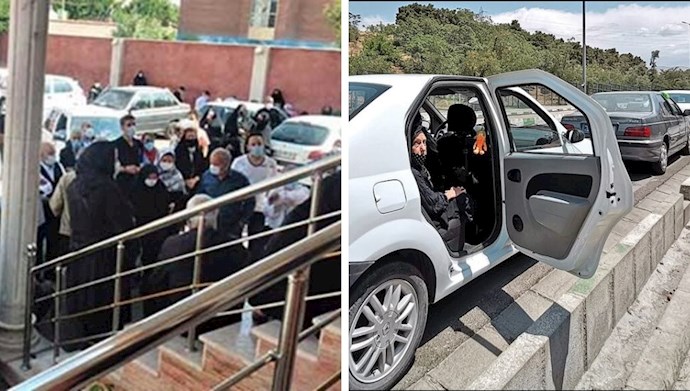