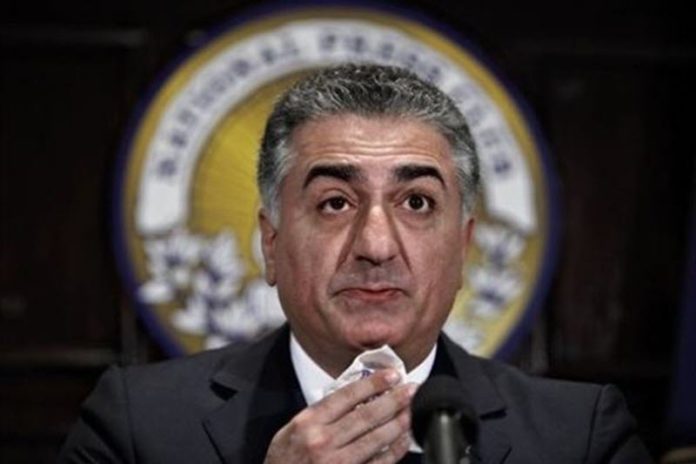 The People’s Mojahedin Organization of Iran’s rebuttal to the interview, as provided to the Bloomberg News, is reproduced below:

Since the beginning of the twentieth century and the Iranian people’s fight for democracy and national sovereignty, they have been confronted by two separate dictatorships: Monarchy and theocracy. In spite of all their contradictions, these two currents are united on one point: hostility to democracy and the brutal crackdown on its advocates. Democracy means the end of dictatorship in any form.

In 1953, the Shah, with the help of a coup by the CIA and the UK’s Intelligence Service, overthrew the only democratic government in Iran’s history, which was led by Dr. Mohammad Mossadegh. The Shah then ruled Iran by terror and suppression for 25 years.

Khomeini’s predecessor, mullah Kashani, was the most important internal factor in the coup and the crackdown on democracy advocates. In 1908, two years after the Constitutional Revolution, when the Qajar King, with the help of the Tsarist Party of Russia, shot down the Majlis (National Assembly), the internal support of the reactionary mullahs was led by Sheikh Fazlullah Nuri. These two mullahs were mentors to Khomeini and his regime and they were honored and praised by him on numerous occasions.

The Shah was booted out of Iran as millions of Iranians chanted “Death to the Shah”. Now, 65 years later, his son has sought to compensate the mullahs for what they did for his father.

As the nationwide uprising at the beginning of 2018 has made the overthrow of the mullahs tangible and imminent, Reza Pahlavi claims that “If the choice is between this regime and the MEK, they will mostly likely say the mullahs.” (Bloomberg News Agency June 19).

The MEK, which was established in 1965, is the principal Iranian opposition movement.

This claim that the Iranian people would choose the mullahs regime, the world’s record holder of execution per capita, and the main sponsor of terrorism, is similar to the claims made by those who led the coup. They and their clerical supporters used to say that the people had overthrown Mossadegh and brought the Shah back to power. Now the roles of the monarchists and the clerics have been reversed. The mullahs are in power and the remnants of Shah’s court act as their facilitators.

Reza Pahlavi does not represent anyone other than himself and his only credibility is being the offspring of a dictator. His claim only adds to the Iranian people’s loathing for the remnants of the Shah’s regime. Thousands of political prisoners who bear the scars of horrific torture by the Shah’s secret police are still alive, as are the mothers of many of those executed by Shah.

Pahlavi’s silly comments reflect the remarks made by Supreme Leader Ali Khamenei on January 9, at the height of the uprising, when he said that MEK is the main organizer of the uprising. A week earlier, the regime’s President Hassan Rouhani had called his French counterpart to say that the uprising was under the control of the MEK and to unsuccessfully urge the French government to restrict members of the organization in France.

The source of Pahlavi’s grudge against the MEK’s women and their free and voluntary choice in wearing the veil can be found in a confession made by Sanaei Rad, the deputy commander of the IRGC, in which he said the MEK’s women were the main organizers of the uprising in many cities.

In the course of the past 53 years, the regimes of the Shah and the ayatollahs have claimed time and again that the MEK was destroyed and that it was devoid of any popular appeal and support. But the MEK has survived solely based on massive popular support from various strata of Iranian society, and it has grown in the face of violent repression and continuous plots including the execution of more than 100,000 of its activists. Even the regime’s most senior officials acknowledge that the MEK is their main challenge.

The MEK is the integral part of the coalition of Iranian democratic opposition movements known as the National Council of Resistance of Iran. Both organizations have consistently sought peace as an honorable and patriotic duty. This has been the case ever since Iraq withdrew from Iranian territory in 1982, leaving Khomeini as the belligerent party who continued the carnage on the basis of the slogan, “Conquering Jerusalem via Karbala”.

As a result of this war, more than one million Iranian youths were killed. The NCRI peace plan that was introduced in March 1983 declared “the 1975 agreement signed in Algeria and the land and water borders established in that agreement as the basis for a fair and lasting peace,” and referred the issue of “determining war reparations” and “the ways that Iran had to be compensated” to the “International Tribunal in The Hague.” This plan was endorsed by 6,000 government figures, parliamentarians and political leaders from throughout the world and was officially welcomed by the government of Iraq, which declared it “an acceptable basis for initiating peace talks.”

This plan clearly reflected Iran’s national interest. But Khomeini’s intransigence led the situation to a point where even today, 15 years after the mullahs’ agents took political control of Iraq, the Iranian regime has not been able to sign a similar peace agreement with the current Iraqi government.

The Iranian Resistance’s domestic and international peace campaign was the key indigenous factor that led to Khomeini conceding to the cease-fire and halting deployment of Iranian teenagers to run across minefields. Otherwise, hundreds of thousands of more young Iranians would have perished. While operating in Iraq, the MEK publicly declared its total financial, political and military independence from the Iraqi government. It adhered to this principle until September 9, 2016, the last day of its presence in Iraq.

More than 15 years after the overthrow of the former Iraqi government and at a time when the Iranian regime controls all the documents and archives of the former government, there exists not even a single document that refutes this reality.