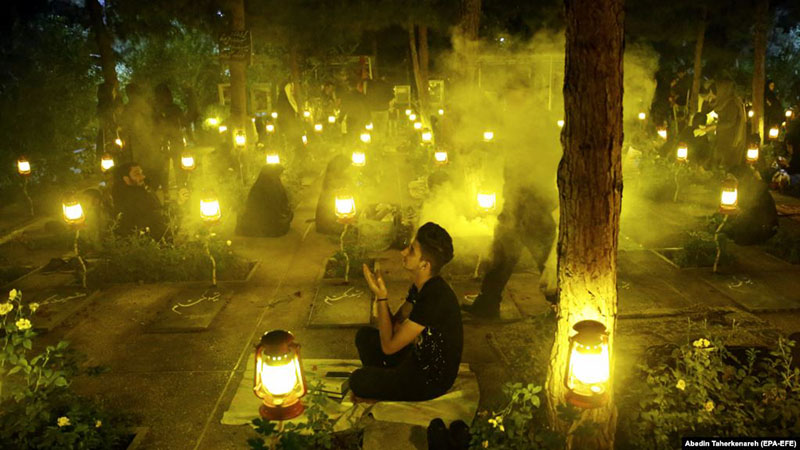 The campus raid was not the only reported incidence of authorities following through on this threat. Neither was it the only source of video that has been circulated on social networking sites that are banned in the Islamic Republic. The IHRM report included another embedded video post from Twitter showing “state security forces resorting to brute force” in carrying out the arrest of a man who was “seen eating in public during fasting hours.” Such arrests take place every year, but there is reason to believe that the current Ramadan period will yield more numerous and more dramatic incidents as a result of the widely-reported, ongoing increase in efforts by the Iranian regime to reinforce its revolutionary Islamist principles.

In addition to threatening prosecution for persons who fail to comply with the daytime fast, government officials and religious clerics have also issued much broader warnings. Among these are statements emphasizing restrictions on playing either live or recorded music where it can be heard by the public, as well as statements urging even greater compliance with the country’s Islamic dress code. These Ramadan-specific warnings come in the aftermath of long-term efforts by morality police and civilian militias to discourage women from wearing loose-fitting hijabs that are deemed by hardliners to be insufficiently compliant with the forced veiling laws.

Conflicts between the public and the regime over this issues came to the fore earlier in May when Tehran University students launched protests over revised academic guidelines and the deployment of additional morality patrols to check on “bad hijab” and other perceived violations of religious laws among the student body. These demonstrations quickly led to clashes with hardline counter-protesters, evidently led by agents of the Islamic Revolutionary Guard Corps and its civilian militia, the Basij.

The on-campus morality patrols are similar to those that operate throughout the country and are generally given more personnel and a broader mandate around the time of Ramadan. As the IHRM report notes, the Iranian judiciary has directed these patrols to be on the lookout for even subtle signs of a breach of religious piety. The judiciary’s spokesperson Gholam Hossein Esmaili, has been quoted, for instance, as saying that “gentlemen must avoid looking directly at female passersby.” It stands to reason that if caught doing so, men may be openly and legally harassed by morality police of fundamentalist civilian volunteers.

“Anyone ignoring [the judiciary’s] instructions during Ramadan will be committing an offence and should expect some punishment from the law enforcement units,” Esmaili concluded. But as evidenced by hijab-related clashes from before the holy month, Iranian citizens can hardly assume that such aggressive enforcement will be limited to Ramadan. In fact, many experts on Iranian affairs have predicted a major increase in repressive activity by the judiciary, following a change in its leadership roughly two months ago.

In March, Supreme Leader Ali Khamenei appointed Ebrahimi Raeisi to replace Sadeq Larijani, who was in turn demoted to a position heading one of Iran’s influential religious foundations. Although Larijani had secured a solid reputation as a hardliner and a strict enforcer of religious law, his replacement is expected to show even greater contempt for domestic and international concerns over the regime’s human rights record. This is because among other abuses in his record as a cleric and judge, Raeisi played a significant role in the mass execution of an estimated 30,000 political prisoners in the summer of 1988.

Raeisi’s appointment as head of the judiciary was widely recognized as evidence of a strategic turn toward greater repression and a more rigid hardline identity by the supreme leader. This perception was reinforced in subsequent weeks by Khamenei’s further statements, actions, and appointments. For instance, IranWire pointed out on Wednesday that Rear Admiral Ali Fadavi had assumed the position of second-in-command of the Revolutionary Guards, while Brigadier General Mohammad Reza Naghdi had been appointed as the paramilitary organization’s deputy coordinator.

“With the two new appointments, Ayatollah Khamenei is sending a message to both Iranians and the outside world,” IranWire observed in a prior article. “The Revolutionary Guards Corps is going to be more hawkish both inside and outside Iran.” Wednesday’s article then followed up by citing conspiracy theories disseminated by Naghdi, which seemingly highlighted the roots of the regime’s hardline turn and its insistence upon strict public adherence to religious laws.

Calling Naghdi “one of the most ignorant, egotistical, paranoid and opinionated Iranian leaders,” IranWire credited him with verbalizing a vision of religious conflict that is shared by the IRGC and the Basij as a whole. It describes Iran’s foreign “enemies,” led by the United States, as using “immoral and Westernized Iranians” to carry out a “soft war” against the theocratic dictatorship. Based on that rhetoric framing, authorities are able to characterize all progressive and secular activities by ordinary Iranians as part of a coordinated campaign of espionage and treason, and to crack down on it accordingly.

Earlier in May, an IranWire blog post pointed to even deeper roots of this worldview, noting that the 13th century jurist Sheikh Ibn Taymiyya set the stage for the development of various branches of Islamic extremism when he described the religion as having four categories of adversaries. These writings promote severe punishment for persons who reject Islam and for those who fail to properly carry out its practices. They also call for the reintegration into Islamist society of those Muslims who assume “infidel habits,” and they allow for peaceful coexistence with “infidel” religious groups like Christians, provided that Muslim leaders are in a dominant position.

Much of this is reflected in the governing structure and laws of the Islamic Republic. Traditional religious groups such as Christians and Zoroastrians are officially tolerated under the national constitution, but are afforded lesser rights, are frequently subject to persecution, and are not exempt from the public religious demands of the regime. Women in Iran are required to wear the hijab regardless of their own religion or nationality. And as the expansion of morality patrols demonstrates each year, non-Muslims may be punished under the law for their failure to adhere to traditions that they personally do not believe in. Additionally, converting to any other religion from Islam is illegal and potentially punishable by death.

While such “apostates” represent one of Taymiyya’s categories of enemies, another consists of those who do not renounce their Muslim faith but are caught eating during Ramadan, or removing their hijabs, or indulging in “Western” lifestyles. And as those lifestyles grow increasingly popular, regime authorities show little differentiation among their crackdowns on different categories of adversary. In each case, Tehran is working to deploy more sophisticated resources against them, whether located at home or abroad.

The Center for Human Rights in Iran highlighted one aspect of this trend on Monday, namely the escalating use of malware as a means of spying on religious and ethnic minority groups and those advocating on their behalf. An investigation identified 74 individuals who had been affected by cyberattacks over roughly the past year, in Iran, the United States, and Europe. In all likelihood, the actual figure is even higher, as some incidents may not have been made public and some victims may not yet know that Iranian hackers have tried to steal their personal data.

CHRI notes that the first known attacks in the given campaign were directed against the administrators of the official news website for the Gonabadi Sufi religious minority. This coincided with clashes between the group and Iranian security forces in February 2018, which emerged out of protests against the prospective arrest of the group’s leader, Nour Ali Tabandeh. Approximately a month after that incident, the Majzooban website received an email including malware that was capable of gathering a list of computer files, taking screenshots, recording keyboard impressions, and granting remote access to the infected device.

Similar malware was reportedly deployed against at least 27 targets just last week, all of them members of the Azeri Arab community. CHRI writes: “The type of malware that was deployed and the people who were targeted reveal that the cyberattacks originated from the country’s security establishment, which includes the Islamic Revolutionary Guard Corps (IRGC) and the Intelligence Ministry.” This once again affirms the apparent turn toward even more hardline activities by regime institutions, although CHRI also notes that the malware and the underlying campaign date back at least to 2009.

Still, there is little question about the upward trajectory of what Iran Human Rights Monitor described last week as Iran’s “online tyranny.” Its report on that phenomenon pointed to expanded coordination between the IRGC and cyber authorities, as evidenced by Supreme Leader Khamenei’s appointment of a former IRGC commander-in-chief to Baghiyatollah Cultural and Social Headquarters, an institution that is reportedly tasked with helping Iran to defend against the supposed “soft war” taking place in cyberspace.

“Comments made by high-level officials, appointments to top positions, and actions taken by legislative and executive branches are all signs that the regime is moving toward imposing tighter restrictions on online activities and Internet users,” IHRM stated.

The same report connected this trend to the recent revision of academic disciplinary standards, which sparked this month’s protests at Tehran University. It noted that the April amendment prohibited “publishing unethical photos” and “committing immoral acts in cyberspace,” but also that it failed to define these terms. This has potentially serious consequences for internet users, who may be targeted for prosecution based on arbitrary and capricious decisions by arresting authorities.

This in term underscores familiar issues with Iran’s criminal justice system, which may have consequences for religious minorities, converts, and secular Muslim Iranians in the current climate of expanded repression. Statements by the judiciary head and other prominent authorities regarding such things as “looking directly at female passersby” suggest that the IRGC, the Basij, and the nations morality police could have free rein to interpret any number of ordinary behaviors as violations of religious law, and to prosecute so-called offenders for waging “soft war” against the Islamic Republic.