The main door of Khavaran was closed and guarded by state police. Those people who had entered the cemetery through the Bahaii’s cemetery gate were also confronted with state police who used force to prevent them from going to the site where the massacre victims were buried. 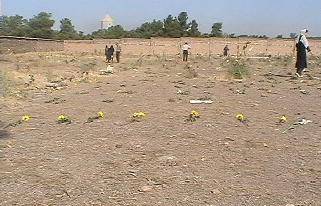 State police also attacked these family members and broke the mobile phone of one woman under this pretext that she should not be taking pictures, reports from inside Iran indicate. The state police also crushed the flowers brought by the family members. This behavior has continued throughout the first week of the new Iranian year. A mother who had gone to the cemetery site said under Rouhani’s government the door continues to turn on the same hinge, adding the Iranian regime fears our martyrs and doesn’t even allow me to visit their grave site.

The Khavaran cemetery is one of the locations where the martyrs of the 1988 massacre of 30,000 political prisoners were buried in mass graves. This massacre took place under Khomeini’s orders. Each year old mothers of the martyrs come to lay flowers and pay their respects at the graves in Khavaran, and each year they are faced with insults, beatings and even arrests, as if Rouhani’s ‘moderate’ government fears the martyrs like those alive.