His stark experiences lead him to wonder in his article, “Which of these worlds is the real one?” That is perhaps a matter of perspective, but it is fair to say that no account of the Islamic Republic of Iran is complete without reference to both of these worlds. Threadgould’s glimpse of the Iranian underground reflects upon a number of other accounts that have been referenced on Iran News Update regarding clandestine movements for teaching Western dance, practicing Christianity, and so forth. 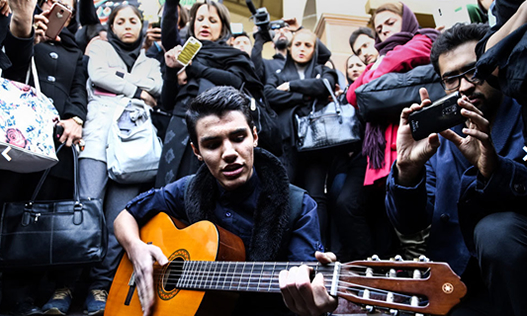 This latter topic is of particular interest in light of a report by Catholic news outlet Patheos indicating that the Catholic Catechism has recently been translated into Farsi. The article says that this development was spearheaded by Iran and Iranian religious authorities and that it has taken place “in a context of increased interreligious dialogue carried forward by Shi’ite Islam.”

Patheos also quotes a Catholic expert on Islam as saying that the pursuit of this translation “proves that [Iranian authorities] are opening to the Western world and to Christianity, and especially to Catholic Christianity.” But as the same article makes clear later on, this incident is in fact another example of the divisions and double standards that separate the Iranian people from the ruling clerical government.

The Farsi translation of the Catechism is intended only for use by Shiite religious scholars who happen to be studying Catholicism. Patheos indicates that about 2,000 scholars at the religious center of Qom are studying non-Islamic religions, out of a total scholastic population of roughly 60,000. The translated Catholic text will be available for those studies, but will not be available to actual Iranian practitioners of Catholicism, who are still banned from using the official Iranian language, as the regime fears that allowing this could teach ordinary Iranian Muslims about other faiths and lead them to contemplate conversion.

In fact, using the Farsi Catechism could potentially land Iranian Christians in prison. Last week it was reported that Pastor Victor Beth Tarmez had been arrested by Iranian authorities during a Christmas party at his home, after having been previously targeted for teaching courses in Farsi at his church.

And while certain double standards shield political and religious authorities while punishing private citizens for similar activities, there are other instances in which the regime’s fear of what it considers to be “sedition” leads even to the targeting of public officials. Indeed, “sedition” was precisely the accusation that was levied by several members of the Iranian parliament when they verbal and by some accounts physically attacked one of their colleagues during a session on Sunday.