The recent statements of some of Iran’s officials and those who are leading the regime’s tribunes, their level of concern, especially in a situation where the Iranian people are struggling with all kinds of problems, is more like trampling of the nerves of the people.

But the reality is that such statements are originating from the regime’s demagogy and lumpish culture, mocking, and joking about everything to make them worthless in the people’s minds.

On the one hand, the concern of the spokesman of Tehran City Council, instead of solving many problems of the capital, is to change the name of the street near the office of the regime’s Supreme Leader, and on the other hand, the interim Friday Imam of Tehran considers the number of trips to the north as a reason for prosperity in the country.

The member of the regime’s parliament held an angry speech about the import of musical instruments and another speaker states that the solution to the water crisis in Isfahan is to offer rain prayers.

Now it should be asked from this member of the Tehran City Council, who was supposed to change the name of the Anoushirvan Street, will such a decision solve the people’s many problems in this city?

And should not he worry about other issues in the country’s capital, like the many peddlers, garbage collectors, the unhealthy atmosphere and air pollution in the city, labor and homeless children, lack of public transportation facilities, and reduced breathing space of the city due to unruly constructions and destruction of gardens and trees in Tehran and hundred other problems?

In another example, the regime’s interim Friday prayers leader of Tehran Kazem Sedighi on December 18 in his speech, while pointing to the current bad situation in the country due to the increase of the price of the dollar and the devaluation of the national currency and said: “The situation of the people is better compared to the beginning of the revolution and the level of welfare of the people is higher than then.

“We now see that with every holiday, people line up to go to the promenades in the north of the country, which is a sign of the level of prosperity in the country.”

This is the ultimate obscenity while more than 60 million Iranians need livelihood assistance and subsidies. How many people from the 85 million population could even line up on the narrow streets leading to the north of the country?

There is no doubt that the welfare of the world’s weakest economies has grown over the past four decades, so is that a reason for the people of that country to be prosperous?

The fact that people once rode horses and camels and today use the subway, cars, and planes are related to the requirements of the time and are not a reason for the better economic situation of the people of a country, as such officials are ridiculously claiming.

The next example came after the water tension in Isfahan, another official said that the solution for the cities water scarcity is praying for rain. On this account, many developed countries who are not dealing with water crisis may have piety and faith and are considering God in their religious duties and political and social responsibilities, so it may be better for the Iranian people to follow their path.

But everybody knows that the reason for the water scarcity in Iran is due to the regime’s negligence and destructive policies, and this will be not solved with praying.

Another example and more ridiculous is that some of the regime’s cleric students of Qom have complained about 15 Iranian women actors due to their lack of hijab and have demanded compensation because of being hurt. 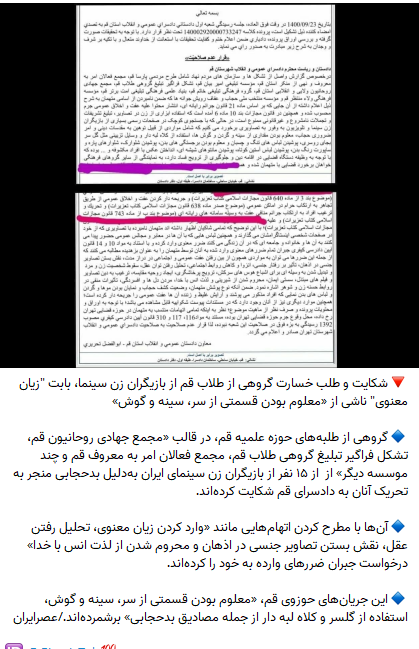 Instead of carrying about the extreme corruption of the regime’s officials these regime’s elements are attacking Iranian women and making them culprits for their evil and perverse minds.

In another example, on December 11, Seyyed Kazem Mousavi, a regime’s MP, and deputy chairman of the Economic Commission of the parliament said in a conversation about the import of musical instruments into the country: “I do not think these instruments should enter the country.

The statements of the regime’s officials and their supporters show that they consider the country as their absolute property everyone who is not thinking like them, does have not the right to be present in Iran, must leave, or will be arrested and likely executed.