The former vice-president of the European Parliament Alejo Vidal-Quadras has written an op-ed on the November 2019 Iran protests, which he assesses was the “most widespread anti-government uprising since the inception of the current regime”, and urged Western governments to support the protesters who are still being targeted by the regime.

Vidal-Quadras, who is also the President of the International Committee In Search of Justice (ISJ), explained that the November uprising, which began over the gas price hike and quickly turned into demands for regime change, spread to 191 cities in all 31 provinces, even across many areas thought to be regime strongholds. The regime killed 1,500 people in the streets in just a few days in an attempt to end the protests.

This was a continuation of the December 2017 protests, which began over the economy and quickly became about the regime, with common slogans like “death to the dictator” and “hardliners, reformists: the game is over”, and ended with regime violence.

Before the protests even ended, Supreme Leader Ali Khamenei was blaming the People’s Mojahedin Organization of Iran (PMOI-MEK), who was also the leading force in the 2019 uprising, which is striking because the regime has always tried to portray the MEK as having little support. His admission shows that the regime knows the MEK, who they tried to exterminate during the 1980s, are the only group capable of taking the regime down.

Vidal-Quadras also spoke about the opposition leader Maryam Rajavi’s ten-point plan for a future Iran, which prioritizes the rights of women and minorities, peaceful foreign relations, and separation of religion and state. He said that this “provides the Iranian people with a shared vision upon which to build an effective protest movement”.

“It is [ridiculous] to think that the feared international scrutiny will not expand to include the 1,500 people who were killed one year ago this month or the others who have been marked for execution since then. At least, it would be ridiculous to think these things, if not for the fact that there is a long history of Iran’s human rights abuses being ignored, especially when they involve the organized Resistance movement,” he wrote.

Vidal-Quadras reminded us that no one has been brought to justice for their role in the 1988 massacre or the crackdowns on protests; in fact, they barely even made it into policy discussions on Iran, something that must be corrected before the next time the regime tries to slaughter its democratic opposition.

Long Overdue Justice for 1988 Massacre Should Be Served 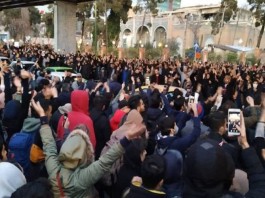