In the weeks leading up to the Presidential election in Iran, political rivalries have severely intensified. To gain political privileges and public acceptance, officials speak about untold stories like the bloody crackdown on defenseless protesters in November 2019.

In a recently published video clip, former Iranian MP Mahmoud Sadeghi admitted that the government had deliberately killed the people on the streets during the gas protests. “I told Mr. [Ali] Shamkhani, the Supreme National Security Council (SNSC) secretary, that these are people. [Security forces] are killing the people in the street. What are you doing? Will you continue to kill if [protesters] remain in the street? Shamkhani said, ‘We followed orders,’” Sadeghi said.

Iranian observers believe that this is a gross confession to the involvement of high-ranking officials—Shamkhani’s superiors—in human rights violations. As the SNSC secretary, Shamkhani is considered the Islamic Republic’s highest security official. In other words, he responds directly to the Supreme Leader Ali Khamenei, the highest official.

On November 15, 2019, Iran’s society was shocked by gas price hikes. The government suddenly increased the gas price by 200 percent without prior notice, leading hundreds of thousands of citizens to the streets to vent their anger over officials’ economic failures. The protests immediately engulfed over 200 cities across the country, according to reports tallied through social media.

In his November 17, 2019 lecture—just two days after igniting the protests, Khamenei described protesters as hooligans, warning, “No wise person who loves his country, who loves his suitable life, should not help these [protesters]. They are ‘hooligans,’” he said.

In a special report, Reuters had revealed that Khamenei had personally ordered suppression. “Do whatever it takes to end it,” Reuters quoted him as saying, on December 23, 2019. Following the Supreme Leader’s order, the State Security Forces (SSF) and the Islamic Revolutionary Guard Corps (IRGC) murdered at least 1,500 defenseless protesters and bystanders and arbitrarily detained more than 12,000 citizens, according to the opposition Mojahedin-e Khalq (MEK/PMOI).

Notably, economic dilemmas in Iran neither vanished nor decreased despite a 200-percent increase in the gas price. Instead, the country plunged into more difficulties, and the government earned public distrust and hatred in addition to financial problems. On the other hand, the government’s hazardous mismanagement over the coronavirus outbreak with hundreds of thousands of fatalities had added insult to people’s injuries.

During the 2020 Parliamentary elections, the Islamic Republic received a public backlash against its cruel crimes in the November protests by an unprecedented apathy to elections. Khamenei attributed the massive apathy to foreigners. “This negative propaganda began a few months ago and grew larger approaching the election, and in the past two days, under the pretext of an illness and a virus, their media did not miss the slightest opportunity to discourage people from voting,” he said.

Nevertheless, today, the Iranian government faces much more social, financial, political, and even security dilemmas in comparison to 2019 and 2020. Officials are concerned about another apathy, which proves Iranian citizens’ disappointment over the entire ruling system.

In addition to ‘moderates,’ Khamenei’s appointees like Saeed Mohammad, the former commander of the IRGC’s Khatam al-Anbiya Headquarters, portray themselves as opposition figures. They intend to exploit public distrust and hatred against the current circumstances as a means to gain the Presidential seat.

However, the people had already rejected both factions of ‘moderate’ and ‘principalist.’ “Reformists, hardliners, the game is over,” the slogan was frequently chanted by citizens in recent years. Furthermore, the people particularly expressed their ire against the IRGC. “IRGC, you are our ISIS,” “IRGC, shame on you, get out of the country,” and “[Former commander of IRGC-Quds Force Qassem] Soleimani was a murderer, his leader [Khamenei] is alike,” protesters chanted on January 11, 2020.

2017– "#JCPOA Signing Was Decided by the Entire State"

2020– "Negotiations with the U.S. Is Harmful and Forbidden"#IranianProtesters, 2017-2020– "Reformists, Principlists, the Game Is Over," "Down with the Dictator" pic.twitter.com/JUsMWmwlHa

In such circumstances, Majlis Speaker Mohammad Bagher Ghalibaf described the government’s situation as tense. “We should truly realize that the current situation of the Islamic Revolution is very critical. Today, we definitely have dilemmas in the management and executive sectors… Some are disappointed. Some say other words. Some are regretful about their past. Some did not accept from day one, and they take the opportunity and spread poisonous claims,” said Ghalibaf, warning about society’s volatile situation. 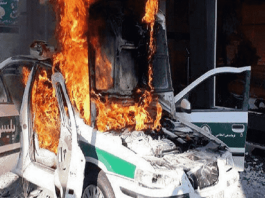 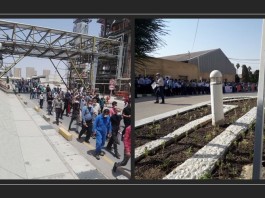 Oil Workers Across Iran Continue To Strike To Protest for Their... 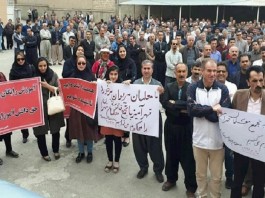 Iran: Teachers and Retirees Take to Streets in 45 Cities