AIANN – Thousands of Iranians, supporters of the main Iranian opposition group, the Mujahedin-e Khalq (MEK) took part in a colourful and well-organized rally across the United Nations Headquarters in New York to condemn the presence of Hassan Rouhani at the UN. The protesters called for the referral of the regime’s abysmal rights record to the Security Council for the adoption of concrete punitive measures. 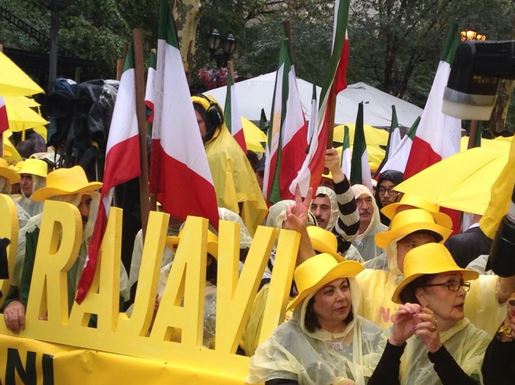 Since Rouhani became President, more than 1,000 people have been executed in Iran, including hundreds of women, youth, ethnic and religious minorities as well as opposition activists.

They also called on the United States and the UN to uphold their long-standing commitment to protect thousands of Iranian dissidents in Camp Liberty, Iraq, who have been subject to deadly attacks by the Iraqi government at the behest of the Iranian regime.

The Iranians who had come to New York from 37 states across America declared that Rouhani does not represent the Iranian people and that he has been a key official in the regime’s clandestine drive to acquire nuclear weapons, later boasting of deceiving the international community.

Carrying Iranian flags and posters of the opposition leadership, the protesters, supporters of the Mujahedin-e Khalq (MEK), underscored that Rouhani should be held to account for the deteriorating human rights situation in Iran, his support for the murderous Assad regime and his continuing refusal to cooperate with the international community to resolve the nuclear stand-off. The Iranians warned that no concessions should be made to the clerical regime on nuclear negotiations and that the clerical regime should not be allowed to exploit the regional crisis to prolong the nuke talks or to gain concessions on maintaining its nuclear weapons program.

In a message to the rally, Mrs. Maryam Rajavi, the President-elect of the Iranian Resistance, referred to the Tehran regime as the Godfather of ISIS, while noting, “Rouhani has been accepted at the UN General Assembly at a time when a report by the Secretary General has underscored the deterioration of human rights in Iran as well as the increase in the number of executions under Rouhani’s watch. Are the U.S., UN, and Europe not distinctly aware of the regime’s warmongering in Syria, of the daily massacres of Iraqis by the regime’s militias, or the regime’s belligerent policies in Yemen and other countries? So, what is the representative of this regime doing at the UN?

“Those who are rightly concerned about the threat posed by ISIS, must realize that the Iranian regime is the godfather of ISIS; it stands at the heart of the problem and cannot be part of the solution,” Mrs. Rajavi said.

Emphasizing that in view of the current chaos in Iraq, the 2,700 residents of Camp Liberty still face grave danger, Mrs. Rajavi added, “UN Secretary General, the UN Security Council, and the U.S. government to fulfil their obligations. They must ensure the security, protection and safety of all Camp Liberty residents until they leave Iraq. This camp must be recognized as a refugee camp and the inhumane siege against it must be lifted.

Several former US officials, including Ambassador John Bolton, Amb. Bill Richardson, Senator Tom Daschle and Senator Robert Torricelli, as well as Ms. Kerry Kennedy addressed the demonstration. The speakers rejected the notion of Rouhani being a moderate and said he is a terror master with a smile. They urged the US to stand by the Iranian people and the Iranian resistance for a regime change and the establishment of democracy and human rights in Iran.

Association of Iranian-Americans in New York and New Jersey