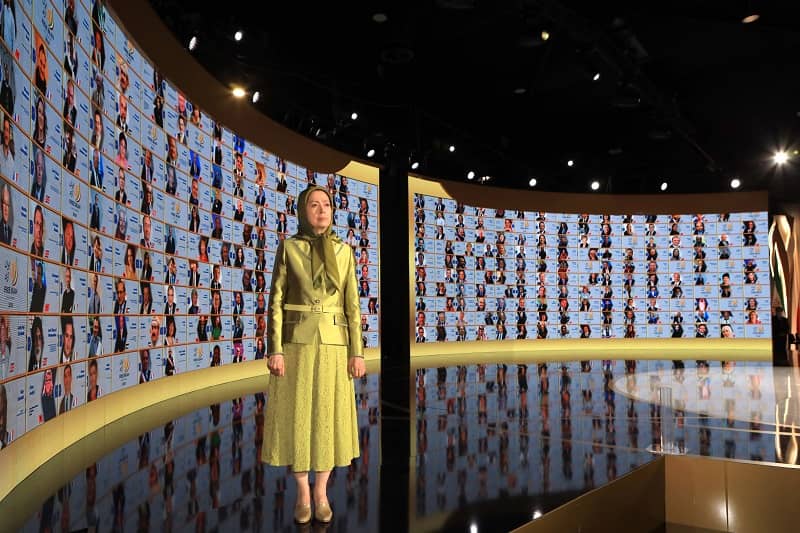 Last month, the Iranian Resistance held its annual Free Iran conference, this year online from Ashraf 3 in Albania, home to the members of the People’s Mojahedin Organization of Iran (PMOI/MEK).

This conference connected over 30,000 locations to Ashraf 3 and was attended by more than 1,000 distinguished politicians.

All the participants and so many more watching voiced support for the MEK and the Iranian opposition president Mrs. Maryam Rajavi. Here, we will look at part of Maryam Rajavi’s keynote address on the three key pledges of the Resistance.

In our last part, we looked at how the regime is failing to protect the people from coronavirus, with now 94,400 deaths reported,  and we will continue that by looking at how the mullahs are spending the Iranian people’s money, as opposed to on healthcare and paying non-essential workers to stay home.

Maryam Rajavi said that during the pandemic, the regime launched satellites, continued their terrorist activities, and increased their nuclear activities, citing comments from the Defence Minister about the number of missiles produced.

She said: “The question is, where do they get the money to spend on such activities? Obviously, by emptying the baskets of our deprived people.”

Maryam Rajavi explained that the mullahs have now increased the amount of Revolutionary Guards (IRGC) Bassij bases to 54,000 and that had they spent even 10% of this money on hospitals, then the coronavirus casualty rate would have been much lower. In a country with 80 million people, there are only 954 active hospitals, which means that every hospital serves an average of 84,000 people.

She then spoke about the grave issues faced by Asiyeh Panahi, a mother of seven in Fadak City, Kermanshah, whose home was razed to the ground by the regime’s local agents in May.

Asiyeh, who was poor and had no support, had just finished building the 40-square-meter home, which certainly took a lot from her. She begged them not to destroy her house and they dragged her to the floor. She died from the brutality of those agents.

She cited that female breadwinners are living in squalor, with 38 million people living in slums and seven million taking shelter in cemeteries.

Maryam Rajavi said: “Everywhere we look, we can only see the mullahs’ destruction. And we will definitely bring an end to this.”

She demanded that the mullahs explain:

She said: “This is the direct outcome of driving at least 60 million Iranians under the poverty line. The mullahs’ depraved and criminal regime must be cursed.”