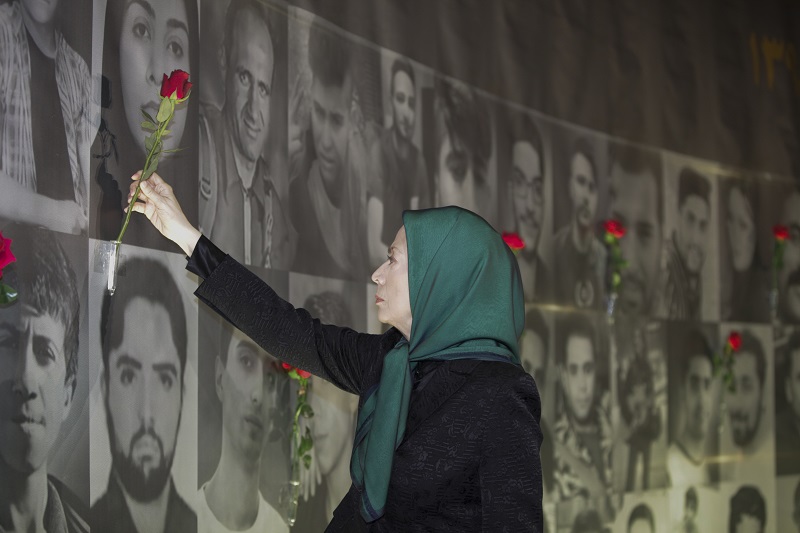 on the 40th day of nationwide Iran, protests to hail the brave protesters who are standing up for freedom, especially those murdered by the Regime, who have become martyrs for the cause.

Maryam Rajavi said: “Let me emphasize that in the face of these arisen youth, the regime cannot forestall its overthrow. Khamenei and his IRGC are dead wrong if they think that they can continue their rule by filling the marshlands of Mahshahr with the blood and corpses of our defenseless people. These massacres signal the end of the mullahs’ inhuman regime.”

She advised that the martyrs of the uprising exposed the true face of Supreme Leader Ali Khamenei as “the most reviled and murderous dictator of our time” for ordering this massacre and that, despite the crackdown, the Iran uprising would continue until the regime is overthrown as the mullahs could not stop the protests.

Maryam Rajavi advised that unlike previous protest movement, the regime had prepared for this one; knowing that it would come as soon as they raised fuel prices., but just like every other protest, failed to grasp the sheer number of people who would come out in protest. They failed to understand that the Iranian people, like all oppressed people, are willing to die for their country’s freedom if that’s what it takes.

She then began to talk about the conclusions she drew from the nationwide uprising, the first of which being that the November uprising dealt an irreparable blow to the regime within just 48 hours.

Maryam Rajavi said: “Angry protesters confronted the regime’s suppressive forces by destroying the mullahs’ centers of repression and plunder. According to the regime’s leaders, 1,000 banks, 900 petrol stations, and many of the government offices were set ablaze. More than 80 IRGC and Bassij bases and police stations, and a large number of seminaries were attacked and overtaken.”

She continued by noting that vast parts of various cities, including Shiraz, Sadra, Mahshahr, Shahriar, Islamshahr, and Quds, were liberated by the protesters.

Maryam Rajavi said: “In some parts, including in Mahshahr devastated people rebelled and took up arms. The protests and uprisings turned into a full-fledged war against the criminal Revolutionary Guards. In this way, they showed the path to, and the prospects of, the victory of the uprisings and the liberation of Iran.”

This uprising will not fade away or be tempered by the regime, that is for sure.

In our next piece, we will discuss Maryam Rajavi’s conclusion that the Iranian people are protesting against the regime in its entirety, discrediting the hardliner versus moderate narrative peddled by the regime and its apologists in the West, and that these protests represent an irreversible turning point in the battle for freedom and democracy in Iran.