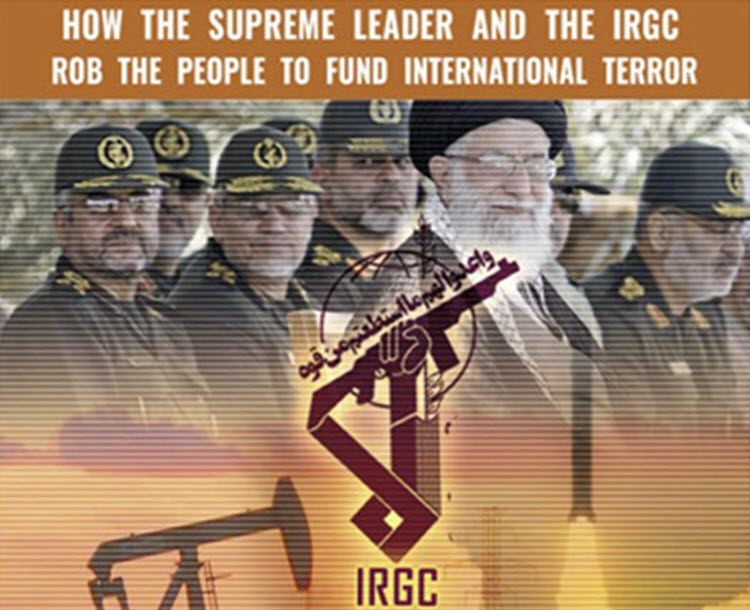 During a press conference given by the NCRI in the Attlee Suite, Portcullis House, Westminster, London, 7 March, 2017, it was demonstrated how under the direct supervision of the Iranian regime’s Supreme Leader, Ali Khamenei, and organized by his faithful IRGC commanders, a large smuggling enterprise is carried out.

Through these smuggling activities, the IRGC has put together a comprehensive economic setup can be said to control the bulk of Iran’s exports and imports.

Intelligence obtained by the People’s Mojahedin Organization of Iran (PMOI/MEK), through dependable sources within the regime itself, particularly in the IRGC in recent months, it has been revealed that 90 docks inside Iran, accounting for approximately 45 percent of its official 212 docks, are under the control of the IRGC and through front companies, which are used to smuggle arms to its affiliated groups, particularly insurgents in Yemen.

“In 1982, under the direct orders of Ruhollah Khomeini, the IRGC had covertly set up docks under the radar of both the government and customs, concealing their existence from international organizations. These docks became known as ‘Bahman Docks’. When Ali Khamenei became Supreme Leader, he saw to it that the activities at these docks was greatly expanded, and to keep the IRGC faithful to him, he increased the Guard’s engagement in vast areas of the country’s economy, in an effort to evade international sanctions,” according to information provided by the PMOI/MEK.

Further, Ali Khamenei’s orders ensured that no authority is allowed to oversee the activities of the IRGC at border areas, so using these entry points. the IRCG can import anything in any quantity without paying customs fees. It smuggles a variety of items including oil, petrol, gas, chemical products, cigarettes, narcotics, alcoholic drinks, mobile phones, pharmaceuticals, hygiene materials and energizing drugs, the proceeds of which, is a sum that is said to amount to around $12 billion annually.

Investigations by PMOI sources concluded that unlawful exports of arms are also carried out through these docks, supplying forces that fall under the umbrella of the IRGC. A series of front companies was set up by the IRGC to dispatch arms through these docks, giving its Quds Force the ability to strike at its enemies, while claiming plausible deniability.

The Iranian resistance gathered information proving that  the smuggling of arms is prolific through these docks, and suggests that a very small portion of these illegal arms dispatches have been uncovered. The PMOI’s network inside Iran has identified three IRGC front companies engaged in smuggling arms, particularly to Yemen. Yemeni docks are closed to Iranian shipping, so these companies use three ports in Oman: Soltan Qaboos Port in Muscat, Sohar Port in North Oman and Salah Port in South Oman.

The Admiral Group Shipping Company is one such company named by the PMOI, as being used by the IRGC.  The company started its activities in 2012, and is owned by the children of former Commander of the IRGC Naval Force and former Minister of Defence, Ali Shamkhani.

Hossein and Hassan Shamkhani are the main directors of the Admiral Group. The company has offices in Tehran and Dubai. Hassan represents the company in Dubai, and Hossein is based in Tehran. This company, which has four subdivisions, including Admiral Feeders, and is said to be specifically engaged in the dispatch of arms to Yemen.

When direct sea routes were closed in 2015, the company was forced to send its consignments to docks in Sohar Port, or by crossing land borders. The arms were then transferred to Yemen. The shipments included AK47 machine guns, RPG rocket launchers, explosives, caches and mines.

Also named by the PMOI, is The Hafez Darya Arya Shipping Company, which has 29 vessels used for transporting containers. Several IRGC companies are said to use it. Using docks in Port Asalouyeh, Bandar Abbas, and Bushehr, the company reportedly offloads goods belonging to the IRGC. It also carries some container cargoes of the IRGC’s major engineering arm, Khatam-al-Anbiya Headquarters. Said to manage the company  is an individual by the name of Keshavarz. Captain Gostari is said to be the company’s head of operations, and Tafzali is in charge of marketing.

It carries cargo to numerous countries in the region, including the UAE, Qatar, Iraq. Kuwait, Oman, Bahrain, and Saidi Arabia. One of the ports to which it ships cargo is Port Sohar in northern Oman, but up until the internationally enforced blockade, its ships had carried cargo to Port Hodeideh in Yemen.

One of the most important companies affiliated to the IRGC is the Valfajr Shipping Company, which was founded by them in 1986. It was originally named Valfagr8 after an IRGC operation during the Iran/Iraq War in 1985.  In 2003, the name was simplified to the Valfajr shipping company.

Valfajr is affiliated with Khatam-al-Anbiya. It allegedly carries IRGC cargoes and consignments, and the manager of the company is Majid Sojdeh. The company’s ships have transferred passengers, cargoes, containers, and IRGC personnel from the IRGC ports in Khuzestan, Bushehr, and Hormozgan provinces in Iran to all of the major ports in the Persian Gulf, including Dubai, Manama, Muscat, Aden, and also in Yemen.

Valfajr Company transfers IRGC consignments to Yemen through Muscat. The company’s vessels avoid flying the Iranian flag so they won’t be identified or searched. Officially and publicly, this company has relegated all of its activities to Hafez Darya Arya shipping company, but has continued activities on its own, in secret.

The specifications and types of ships and vessels used by this company are identical to IRGC vessels, the only exception is that the name of the Valfajr Company has been placed on them. Despite being identified on its website as affiliated to the organization of ports and shipping, in reality it is affiliated to Khatam-al-Anbiya Headquarters. Individuals by the names of Lotfollah Saeedi, and Mansour Islami are among the managers of this company.

Information about dozens of the 90 ports that are under IRGC control throughout southern Iran has been revealed by the network of the People’s Mojahedin Organization of Iran (PMOI/MEK).  One of the many ports exposed by the PMOI document, is the IRGC dock in Bostaneh port, located in the central district of Bandar Lengeh (Hormozgan Province).  The IRGC uses this port for smuggling weapons and goods on small vessels.

Two other IRGC docks are on each side of Abu Musa Island, also the location of an IRGC tactical base called Abolfazl Abbas. This base houses IRGC marines and rangers of the Imam Sajad Brigade, which is under the command of IRGC Brigadier Sadeq Amoie. The brigade is in charge of protecting the island. The smuggling of weapons and goods is carried out from these docks, under the supervision of Amoie.

A full list of docks, plus other information is available in the PMOI exposure document.

Dr. Mathew Offord, Conservative MP for Hendon, presented an introduction to the meeting, which was also attended by Mr. Hossein Abedini, of the NCRI Foreign Affairs Committee, who presented a slide show, and Struan Stevenson, president of the European Iraqi Freedom Association, who also lecturers on Middle East policy. Stevenson presented a report on “The Destructive Role of Iran’s Islamic Revolutionary Guards Corps (IRGC) in the Middle East”.