From the revolutions in 1848 all over Europe, the October revolution, the American Revolution, the French revolution and for our people the 1979 revolution, which has changed many things in Iran, but unfortunately the clerical regime now in power has hijacked it for 40 years and changed the field of people’s hope to a wasteland of disappointment and misery.

But for Iran there is hope, starting from 20 June 1981 with a grand demonstration against the regime’s tyranny and giving it an ultimatum to hear the voice of the people and change its ways. The regime chose the opposite path and now the Iranian people and its opposition to the MEK/PMOI and the NCRI are confronting it.

Every year the Iranian people memorize this day and show their decisiveness to continue this path until a free Iran is achieved.

On 20 June 2020, the Iranian people and the supporters of freedom around the world held a grand online conference to show the world the face of their resistance.

On this conference Mrs. Maryam Rajavi, President-elect of the National Council of Resistance of Iran (NCRI) said about Iran’s situation and its future:

“Iran’s 40-year history clearly shows the necessity and rightfulness of June 20, 1981. For this reason, the passage of all these years has failed to push it into oblivion”, she said during her keynote speech at the conference.

Mrs. Rajavi laid out the sacrifices made by the members of the Iranian Resistance during the decades that have passed since that fateful day, including the summer 1988 massacre of political prisoners in the dungeons of the regime and the mullahs’ numerous terrorist attacks and plots against resistance members across the globe.

“The rebellious generation which has risen up in the current uprisings of the people of Iran has blossomed from the rightfulness of those sacrifices,” Mrs. Rajavi added.

“The uprisings which began in December 2017 and culminated to the furious uprising in November 2019, has brought the strategy (of resistance) launched on June 20, 1981, into fruition in Iran’s streets. That strategy is now speaking loud and clear.” 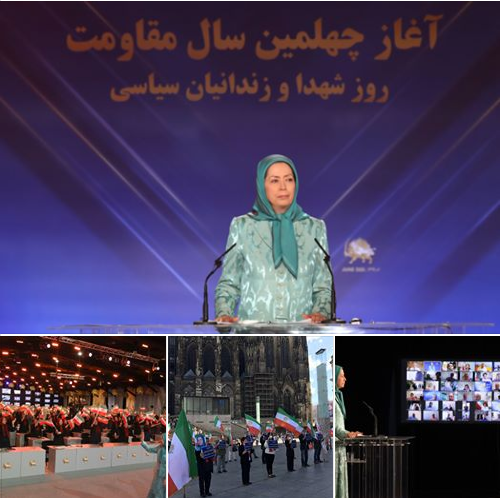 Mrs. Rajavi stressed that despite the regime’s widespread efforts to suppress uprisings, the protests movement is growing thanks to the efforts of the brave Resistance Units inside Iran.

“[Iranian regime Supreme Leader Ali] Khamenei and [President Hassan] Rouhani are trying to obstruct the path leading to the threat of uprisings and overthrow by implementing a strategy of inflicting death and mass human casualties. But this barrier lacks in strength and will not last long, because the mullahs are stuck in a vortex leading to their overthrow,” the NCRI President continued.

A measure of the regime’s desperate situation is its ongoing demonization campaign.

“There is not a single day in which the regime ceases to spread lies and demonization against the PMOI and the Iranian Resistance. But this attempt has backfired and inadvertently, every day, the regime is actually pointing the Iranian society and especially the youth who are seeking freedom and justice to the direction of its democratic alternative,” the Iranian opposition President added.

Mrs. Rajavi stressed that the Iranian Resistance will shatter the chain of plots by the clerical regime in its final phase.

“At this juncture, for the crisis-ridden regime, the crux of the matter is to eliminate the sole democratic alternative to ensure the mullahs’ survival,” she continued.

Also, worth noting is the regime’s continued terrorist attempts against the Iranian Resistance, which has become the focus of international attention in the past few years.

“The regime’s leaders must face justice as the greatest perpetrators of terrorism in the world today as should their agents and mercenaries inside and outside Iran,” the NCRI President emphasized.

She also underlined the need for continued sanctions and the restoration of UN Security Council resolutions against the regime.

“The global community must recognize the right to resist against the religious tyranny by the rebellious youth, Resistance Units and the Iranian people,” Mrs. Rajavi concluded.

Below are parts of the speeches holding by the resistance supporters at this conference:

“In Iran, the youth are suppressed and arrested. This regime exploits even the novel coronavirus to kill political prisoners. This situation is unfortunately met with silence from Europe,” said Italian MP Antonio Tasso.

Michele de Vaucouleurs, Member of the French National Assembly, “I am impressed by the uprisings of Iranian women and girls who are the victims of the regime’s misogynist rule. Honor crimes in Iran show the misogyny of the mullahs.

“It’s 40 years since the people’s revolution has been hijacked by the mullahs. They are twisting and distorting religious beliefs for their own power. Throughout these years, the NCRI has survived,” said British MP Steve McCabe, a former Parliamentary Whip.

“Since the beginning, the mullahs’ regime betrayed the trust of the Iranian people. Thanks to evidence gathered by the MEK, we know the regime has executed 120,000 opponents since 1979,” said Íngrid Betancourt, former Colombian Senator, and presidential candidate.

“The tyranny of the mullahs continues to this day. The international community must not remain silent about this,” said Faisal Odeh Al Rfouh, former Jordanian minister.

“Even with all the appeasement and collaboration the regime has enjoyed by western countries, it is in a critical phase. The resistance is stronger every day. We still have enormous tasks in fighting this common enemy of the Iranian people and all freedom-loving people across the world,” said European Parliament Member Hermann Tertsch.

“The activities of Resistance Units inside Iran have been a major factor for bringing change to Iran. It’s time for Europe to take concrete actions to make the regime know that we have a firm policy and we stand with the people of Iran,” said former Spanish Senator Margarita Duran Vadell.

“You’re a bright example Mrs. Rajavi. Your main goal is equality and equal value of men and women, in leadership positions, to show people we are not without power. The equality of men and women is an important chapter for freedom in Iran or any other country in the world,” Rita Süssmuth, former Speaker of the German Bundestag from 1988 to 1998.