Speakers in Oslo stressed that Iranian President Hassan Rouhani is not a reformist and his goal is to continue the religious dictatorship established by the ongoing 24 year long reign of Supreme Leader Khamenei. The only route to democracy and peace in Iran is replacement of the current regime with a just and secular government. 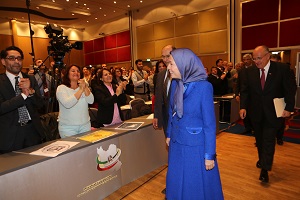 The speakers supported the 10-part plan proposed by National Council of Resistance of Iran President-elect Maryam Rajavi to transition to such a government.