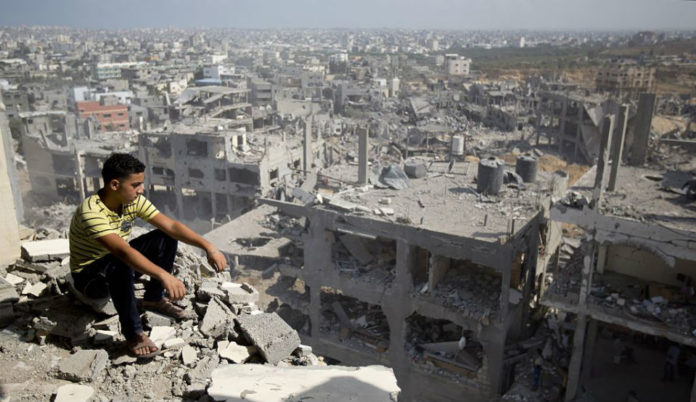 In an op-ed for Arab News Dr. Majid Rafizadeh explains exactly how the Iranian Regime became involved in Syria, how their role transformed from merely advisory to one that is “deeply embedded” in the country’s political and military infrastructure with a complete “disregard for the sovereignty of the Syrian nation”.

The article further adds: “Iran’s foreign and military policies in Syria are far-sighted and carried out with the aim of accomplishing the long-term revolutionary, ideological and hegemonic objectives of the regime.”

Now, the Iranian Regime that is aiding Bashar Assad is essentially “an occupying force” and even Iran’s Foreign Minister Mohammad Javad Zarif has started boasting that no one can evict them.

Well, the Regime may think that no one can stop them in Syria, but that’s why it’s even more important that the international community work towards that. Otherwise, we risk Syria becoming an Iranian vassal state, like Iraq, as we know they will not give it up by choice.

Rafizadeh wrote: “Strategically speaking, the regime of Assad is too vital for Iran to abandon. Controlling Syria gives Iran immense geopolitical and military clout in the region. In addition, Tehran is effectively utilizing Syria to create a land corridor from Tehran to the Mediterranean, to support Hezbollah, empower Shiite militias in other nations, accomplish its regional ambitions, and tip the regional balance of power in favour of the ‘Shiite Crescent’.”

In his piece, writer lays out five strategies to tackle Iran in Syria. Let’s look at them.

The international community should establish a no-fly zone on the Syrian borders, something which Jordan and Israel, who share a border with Syria, would be in favour of.

Rafizadeh explains: “Iran’s military and militias rely on the Syrian regime’s air force to give its militants cover on the ground. Aerial attacks put the Syrian regime, and consequently the [Iranian Revolutionary Guard Corps or IRGC], in a more advantageous position in comparison to the opposition groups. Without the aerial bombardments, Iran’s military would find it extremely difficult to score victories and make territorial advances at its current swift pace.”

It is well known that the IRGC has several command and military bases in Syria. One way to stop the Regime is to strike their command centres.

Make the moderate Syrian opposition into a powerful and legitimate force

The Syrian opposition has been heavily targeted in attacks by Iran and Syria – both physical and propaganda.

The Regimes have tried to discourage support of the opposition, by claiming that they are terrorists. Don’t believe them.

Rafizadeh also explains: “With intelligence and advisory assistance, the Gulf Cooperation Council, the US and its EU allies can reinitiate their plan to support a moderate Syrian opposition group. A moderate Syrian force could play a significant role as a bulwark against Iran’s entrenchment.”

The suppressed ethnic minorities in Iran and Syria have been fighting the Regimes for a long time already and proved themselves effective when fighting ISIS, but the West has cut off funding for the groups. They should reverse this decision.

The Iranian Regime is spending billions of dollars to keep Assad in power, most of this gained from oil exports. The leaders of Europe can put significant pressure on Iran’s military by suspending its oil imports. Europe’s other alternatives for oil supply can be the Gulf states.”