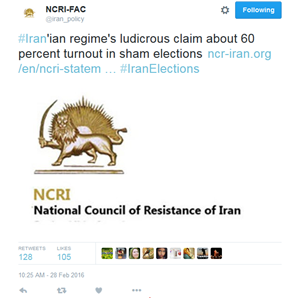 The NCRI, which both predicted and advocated for widespread boycott of the “sham” elections, was also quick to dispute the international media’s characterization of the elections as a victory for moderate and reformist candidates affiliated with President Hassan Rouhani. That is not to say that the announced results of the voting are in doubt, but rather that there is some disagreement about the degree of difference between the reformist and conservative camps.

On one hand, Reuters that Iran’s judiciary chief Ayatollah Sadeq Emoli Larijani responded somewhat angrily to the results, accusing “American and English media outlets” of influencing the results of the race for the Assembly of Experts, from which at least leading hardline clerics have now been excluded, according to the international press.

But the same Reuters report also quoted Supreme Leader Ayatollah Ali Khamenei as reacting to the results in a way that seemed to imply persistent confidence in his hardline faction’s control over Iranian affairs. Khamenei had encouraged the high levels of turnout that were expected to favor “moderate” and “reformist” candidates, and he praised that supposed turnout after the fact. But he also urged the Islamic Republic to limit its cooperation with Western powers, thus repeating the sentiment he had expressed in the immediate aftermath of Rouhani’s negotiations over the Iranian nuclear program.

Those negotiations ended with Iranian commitments to the diminished nuclear enrichment activities in exchange for sanctions relief that were potentially life-saving for the Iranian regime. This has contributed to considerable differences of opinion regarding whether Rouhani’s openings to the West were aimed at genuine reform or were deliberately limited to those domains that would allow the regime to preserve its status quo as a result of diminished Western pressure.

Naturally, these questions will carry over to those affiliates of the the Iranian president who were voted in during Friday’s elections as part of a “List of Hope” that was also endorsed by prominent figures like former President Ali Akbar Hashemi Rafsanjani.

According to figures presented by Agence-France Presse on Monday, the list had generated 95 of the winners in the races for seats in parliament. But this is compared to 103 winners from the traditional conservative faction, meaning that that representation remains stacked against the reformists. Several reports have indicated that this discrepancy could be made up by cooperation with reformists by the 14 independent candidates who also won seats, but their loyalties and voting patterns will be much more in question than those of the candidates who were explicitly described as reformists.

What’s more, those so-called reformists were drawn from lists that included both reformist and conservative candidates, a factor that led to a great deal of criticism from other reformists who felt that their political faction was giving up its identity for the sake of political expediency. Notably, some candidates appeared on both the List of Hope and the conservative lists, raising even more doubts about their reformist credentials. According to Reuters, this includes several of the 15 supposedly reformist candidates who won the leading seats on the Assembly of Experts.

At the same time that doubts remain unresolved about the actual political positions of so-called reformist candidates, it also remains to be seen what the final balance of “reformist” versus conservative candidates will be. That is, 69 slots will not be filled until April runoff elections, in which candidates will have a chance to secure the required minimum percentage of the vote. And according to AFP, conservatives have a clear advantage in these remaining contests. 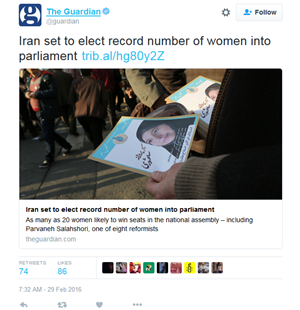 Nevertheless, the final vote tallies are unlikely to change the apparently dominant international narrative that is presenting these elections as a step toward moderation for the Islamic Republic as a whole. Those claims are buttressed not only by the figures for the number of technically reformist candidates who won, but also the number of women who will serve in the incoming parliament. That figure is set to more than double from nine to about 20, and more than that, The Guardian featured an interview with one of the newly victorious candidates, who was uncharacteristically outspoken about women’s rights issues, even advocating for the taboo topic of removing the legally requirement for women to wear Islamic veils.

However, outspoken statements at the time of the election do not necessarily signify follow-through, as evidenced by the number of Iranians who abandoned support for President Rouhani after he failed to follow through on any major promises of domestic reform. Furthermore, those female members of parliament who have served in the past have done so by avoiding controversial topics of women’s rights, and even if their positions were to reverse with the new parliament, a female delegation of 20 will not be able to make any moves within a total parliamentary population of 290.

Serious reformist bills, especially regarding women’s rights, have never made any progress through that parliament even when they have been introduced. And as Reuters pointed out alongside its quotations from Khamenei and Larijani, the legislative structure of the Islamic Republic is set up to forestall serious reforms regardless of the composition of the parliament. The Guardian Council, a body of 12 members appointed directly and indirectly by the supreme leader, still has the authority to vet all legislation and single-handedly obstruct anything that appears to threaten the regime’s status quo.