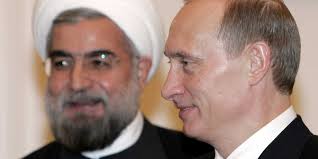 It is certainly the case that Russia and Iran’s individual contributions to the Syrian Civil War have been on the upswing. This month Russia moved from mere financial and material assistance to direct contributions to the war effort. The Wall Street Journal reports that Moscow may soon deliver an additional two dozen fighter jets to the Assad regime, for use against ISIL targets as well as moderate rebels such as the Free Syrian Army.

The extent and nature of Iranian contributions are somewhat less clear. There are certainly dozens of officers from the Iranian Revolutionary Guard Corps’ Quds Force present in the country, though some sources including networks of Iranian dissidents report that the hardline paramilitary’s contributions are more numerous and include direct participation in conflict. Iran denies this, but it also routinely denies demonstrable influence in Syria and other regions of the Middle East.

In fact, the extent of Iranian influence in Syria was discussed on Tuesday in an article published by The Guardian. It noted that even persons close to the Assad regime are concerned about Iranian overreach and its contribution to the increasingly sectarian nature of conflict in Syria. The same accusations have been levied against Iranian influence in Iraq. In that case, Tehran has been widely blamed for the consolidation of power into hardline Shiite hands, which alienated the Sunnis and set the stage for the rise of ISIL as a Sunni alternative to Shiite extremism.

The Guardian quoted one prominent Syrian lawyer as saying that if the situation in Syria continues along its current trajectory, Tehran could eventually control everything. Already it has attempted to wield local authority to force population swaps in order to explicitly divide Sunni and Shiite Syrians. Such attempts to manipulate policy are in stark contrast to Iranian officials’ public statements repudiating all foreign influence in Syria.

Syrian journalist Ibrahim Hamidi told The Guardian that Iran has been habitually doing the opposite of what it says with respect to foreign influence, desire for a political solution, and more.

In this way, Iran’s actual activities contradict not only its own statements, but also some of the professed expectations of Obama administration officials regarding the prospects for a political solution to the ongoing crisis. The Associated Press reported on Tuesday that Secretary of State John Kerry said he still hopes that Russia and Iran recognize that the Assad regime’s days are numbered and that they will thus come around to supporting a political transition and an international compromise.

Iran has stated that it wants the decision about future leadership to be left entirely to the Syrian people, but its recent activities call the sincerity of those statements into question. What’s more, the depth of Iran’s investments in and alleged plans for Syria make it unlikely that it will allow for the removal of a close ally as long as there is any alternative.

The situation may not be as straightforward with regard to Russia’s participation in the conflict and its potential resolution. The AP and the Wall Street Journal both indicated on Tuesday that Russia may be willing to consider a solution that involves the end of the Assad regime as long as it preserves Russia’s interests in the region, including the security of two Russian military bases.

Russia and Iran have different motives for their assistance to Assad, and the associated goals can be fulfilled in different ways. But Iran likely needs Assad to remain in power in order to keep open lines of transit for Iranian weapons deliveries to Palestinian terrorist groups and Lebanon’s Hezbollah paramilitary. Thus, the persistence of Russian interventionism in Syria may come down to the question of how committed Russia is to preserving and growing an alliance with Iran.

If its interest is strong in this area, Moscow will presumably not be quick to sell out Iranian interests in Syria. And numerous developments over the past months and years have given the impression that Russia and Iran are mutually committed to growing closer in the realms of economy, politics, and military cooperation.

The latest example of the latter comes in the form of reports that new sales of military equipment are being arranged between the two countries, close on the heels of the completion of a sale of advance S-300 missile systems to Iran. The National Interest reported on Tuesday that Tehran claimed it would be purchasing Sukhoi Su-30 Flanker jet fighters from its partners in Moscow, thus moving the outmoded Iranian air force toward moderation in one transaction.

One outgrowth of the general collaborative relationship between Iran and Russia, according to the Wall Street Journal, is that although there is no clear evidence thus far, some highly placed US officials assume that the two countries are directly coordinating with each other on their defense of Assad.

The same article noted that the Syrian Foreign Minister Walid Mohi Edine al Muallem personally claimed that this collaboration was growing. He went on to invite other nations to join in that collaboration, and by some accounts at least one other nation and one non-state actor are in the process of so doing. Now Lebanon reports that a recent article in a prominent pro-Hezbollah newspaper claimed that recent talks had led to the formalization of an alliance consisting of Iran, Russia, and Syria, as well as Iraq and Hezbollah.

This alliance has reportedly been dubbed the 4+1 alliance by those responsible for forming it, in a mocking reference to the P5+1 group of nations that was responsible for the July 14 Iran nuclear agreement and the current climate of arguably one-sided rapprochement between Iran and the West.