The Popular Mobilization Forces [Hashd al-Shaabi] is a part of Khamenei’s armed forces in Iraq which was founded in 2014. “The chief of Iraqi Basij assembly Aqil al-Hussaini described Hashd al-Shaabi as the trail of Iran’s Basij, which has benefited from experiences of the Iranian version’s one. ‘In the Iraqi Basij structure, we modeled on the Iranian Basij,’ [then-Iran-backed] Iraqi prime minister Nouri al-Maliki told ABNA news agency in August 2015,’” the Iranian state-run website Tabnak wrote on the same date.

This force has consisted of about 40 different groups, which are generally Shiite armed militias. Many of these groups already operated terrorist attacks against the Coalition Forces on the behalf of the IRGC-QF in Iraq. These militants have a notorious track record of mass killing against religious minorities with total impunity.

In September 2015, the ayatollahs’ Iraqi murderers were eventually recognized as a part of Iraqi government forces, according to the Iran-backed prime minister Heidar al-Ebadi.

Abdulaziz al-Mohammadavi is also known by Al-Khal, which means uncle in Arabic. He had a long-time friendship with the slain former chief of the IRGC-QF Qassem Soleimani.

Since 1982, he joined the terrorist Badr organization commanded by Hadi al-Ameri. During the eight-year Iran-Iraq war, as al-Ameri’s assistant, al-Mohammadavi conducted intelligence operations to the benefit of the Iranian regime. He also served as an intelligence agent for the Badr organization in the Kurdistan region.

In 2004, Abu-Fadak refused to have over weapons that his group had amassed during the U.S. invasion on Iraq and kept them for orchestrating terror plots against the Coalition Forces. In this respect, he was ordered by Tehran to organize several terror squads under the Badr’s financial support.

In the same year, Soleimani, the secretary-general of Lebanese Hezbollah, and al-Muhandis incited al-Mohammadavi to establish a joint force. Thereafter, he founded the Iraqi version of Lebanese Hezbollah under the name of “Kata’ib Hezbollah (KH)” in cooperation with another known terrorist Imad al-Muqnieh. This terrorist entity still receives its funds and wages from Hadi al-Ameri directly. Later, the U.S. troops detained him and held in jail for a time, however, the integrators didn’t discover al-Mohammadavi’s real identity. At the time, he became more commonly known by the al-Khal nickname.

Then, in 2006, al-Mohammadavi widened his collaborations with al-Muhandis and received his order from Qassem Soleimani directly. Alhurra.com recently revealed that Hadi al-Ameri suggested his lieutenant ‘al-Khal’ to succeed al-Muhandis. 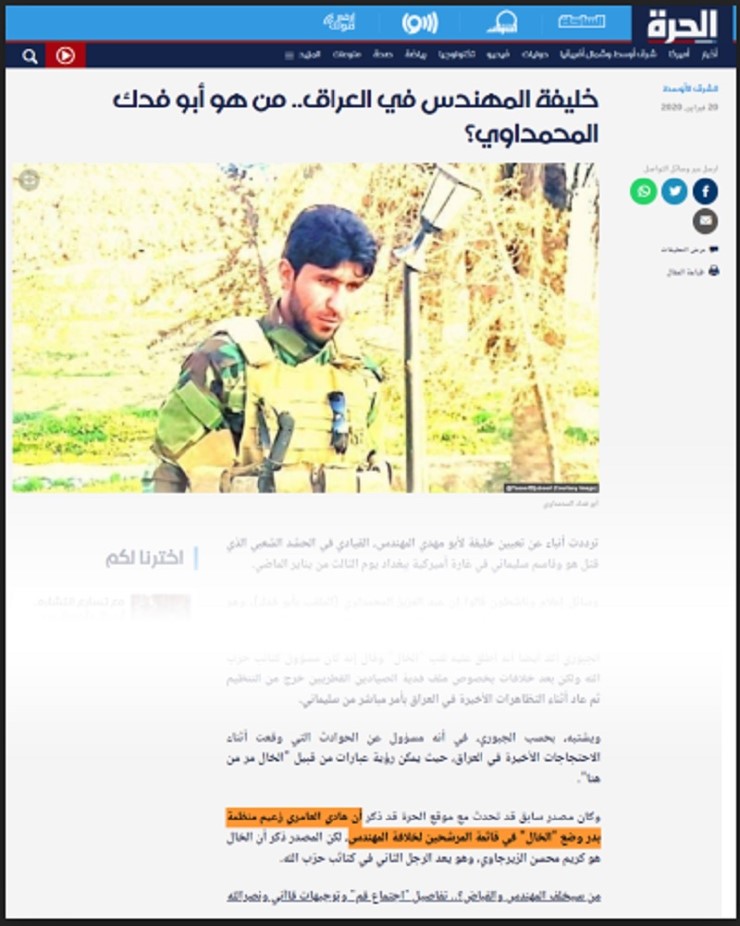 In December 2015, KH commanded by al-Mohammadavi abducted 26 Qatari hunters, several from the Qatari Emir’s royal family. Notably, al-Mohammadavi’s superiors pursued to gain political privileges in return for the handover of the hostages. However, al-Khal sought to receive $500 million in exchange for releasing hunters.

Some while later, after the scandal became public, other KH commanders fired al-Mohammadavi for abusing his authority. The Iranian decision-makers of KH finally freed the hostages in return for stopping Qatar’s support for Syrian dissidents. Qatar both delivered $500 million and persuaded its sponsored forces in Syria to deliver their territory lands to Assad’s regime.

Remarkably, Soleimani attempted to whitewash the flagrant scandal and cease tensions in the KH hierarchy. However, his efforts failed and KH commanders expelled Abu-Fadak out of the group. But, after the start of the October Revolution in Iraq, al-Mohammadavi rejoined to the KH for a crackdown on the protesters under the direct order of Soleimani.

In summary, it is worth noting that Abdulaziz al-Mohammadavi, Abu-Fadak, al-Khal, or any other nickname he possesses, is appointed by Tehran as the successor of slain Abu-Mahdi al-Muhandis. This matter shows the scale of Iran’s influence in Iraqi affairs and its path for committing any crime for preserving this country while the regime is severely dealing with breathtaking crises in different sectors at the home.