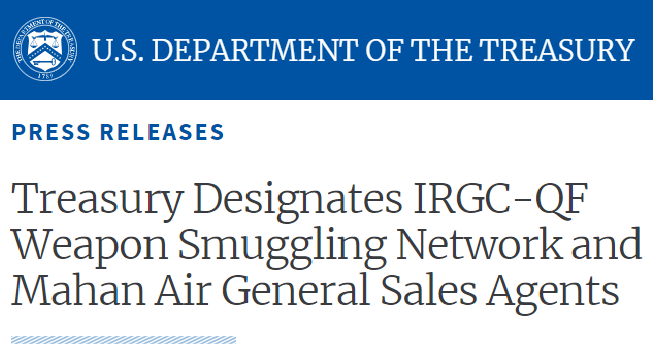 In November, the US seized Iranian weapons that were smuggled on a boat headed to Yemen.

OFAC also designated three Iranian airlines Mahan Air general sales agents based in the United Arab Emirates and Hong Kong for their role in smuggling weapons to Yemen’s Houthi rebels, having designated Mahan Air as a whole in 2011 for support to the IRGC-QF.

The GSAs, which are being designated for having acted on or purported to act for or on behalf of, directly or indirectly, Mahan Air, include:

These actions were taken under Executive Order 13224, which targets terrorists and those supporting terrorists or acts of terror. Mahan Air has routinely flown fighters and weapons to Syria to support the Assad regime and elsewhere to support Hezbollah, which has contributed to mass atrocities and displacement of civilians.

#Iran #News: #US SUSPENDS #EXPORT LICENSES OF A #TURKISH #COMPANY AND ITS 3 SUBSIDIARIES FOR #DEAL WITH IRAN’S MAHAN AIR https://t.co/AeH7D0MERB#FreeIran #Iranprotests #FreeAllProtesters pic.twitter.com/4ZrXe2lE3J

The Treasury said: “[These designations] provide another warning to the international aviation community of the sanctions risk for individuals and entities that choose to maintain commercial relationships with Mahan Air and other designated airlines.  In addition to GSA services such as ticketing and freight booking, the industry should conduct due diligence for other activities that, when conducted for or on behalf of a designated person, maybe potentially sanctionable.  Such activities may include reservation and ticketing services, procurement of aircraft parts and equipment, maintenance contracts, airline grounds services, catering, interline transfer or codeshare agreements, and refueling contracts.”

Meanwhile, the Department of State designated Mahan Air under Executive Order 13382 – which targets weapons of mass destruction proliferators and their supporters.

The Treasury said: “As a result of today’s action, all property and interests in property of these persons that are in the United States or in the possession or control of US persons must be blocked and reported to OFAC.  OFAC’s regulations generally prohibit all dealings by US persons or within (or transiting) the United States that involve any property or interest in the property of blocked or designated persons.”