In recent days, there have been rumors that the price of bread will rise soon. The news came at a time when the coronavirus had already sunk Iranian cities in grief and stress. However, the hikes proved the regime’s inefficiency while citizens are in maximum need for support.

Iran under the mullahs’ heels was among a handful of countries that have not provided supportive packages for citizens when the country was hit by the COVID-19 disease. Furthermore, authorities resumed financial activities and reopened government offices while the country has yet to overcome the peak of the infectious illness.

In fact, society practically shut down financial activities and isolated cities in opposition to officials’ desires. Contrary to the people, the mullahs frequently objected to the blocking of cities’ gate. They neither implemented quarantine policies nor supplied impoverished segments of the society who lost their revenues due to the coronavirus’ consequences.

“We have no plan to quarantine any district or city in Iran,” the regime’s President Hassan Rouhani said on February 26. Of course, authorities later displayed that they have no transparency and honest informing the public with keeping the society in dark about the entry of COVID-19 in Iran and its rapid outbreak.

On April 17, Health Minister Saeed Namaki said, “Since January, when [coronavirus] cases were declared in China, I requested an emergency meeting with the First Vice President on a holiday and requested that flights from and to China be canceled. And after learning about the first cases in our country, I suggested restrictions such as closing universities, schools, gatherings, Friday prayers, weddings and mourning, religious ceremonies, Rahian-e Nour gatherings…”

In this context, the National Council of Resistance of Iran (NCRI) revealed several documents clearly show that several coronavirus patients had been hospitalized in Tehran in early January. At the time, the NCRI announced over 15,500 people have died of coronavirus in 237 Iranian cities, according to the People’s Mojahedin Organization of Iran (PMOI/MEK).

Also, a video on social media proves that a coronavirus patient was diagnosed in Golestan province in early December 2019.

However, officials frequently assured the people there is no reason for concern about the coronavirus outbreak in Iran. They held annual processions marking the 41st anniversary of the establishment of the religious fascism as well as the sham Parliamentary elections in February.

“We control all passengers entering Iran from China for coronavirus symptoms… There is no concern about this virus inside the country, and we will check them all,” the state-run Boyer News website quoted Deputy Health Minister Iraj Harirchi as saying on January 25.

On February 19, state media acknowledged that two patients had died of the novel coronavirus in a hospital in Qom. Notably, the officials had realized about the coronavirus’ entry to the country if patients were hospitalized. On the other hand, the regime had been informed that the virus had been spread among the citizens if officials had suddenly found patients.

Also, authorities neither postponed the parliamentary elections nor quarantined Qom city, which exaggerated the health crisis in the country.

Raising the Bread Price in Silence 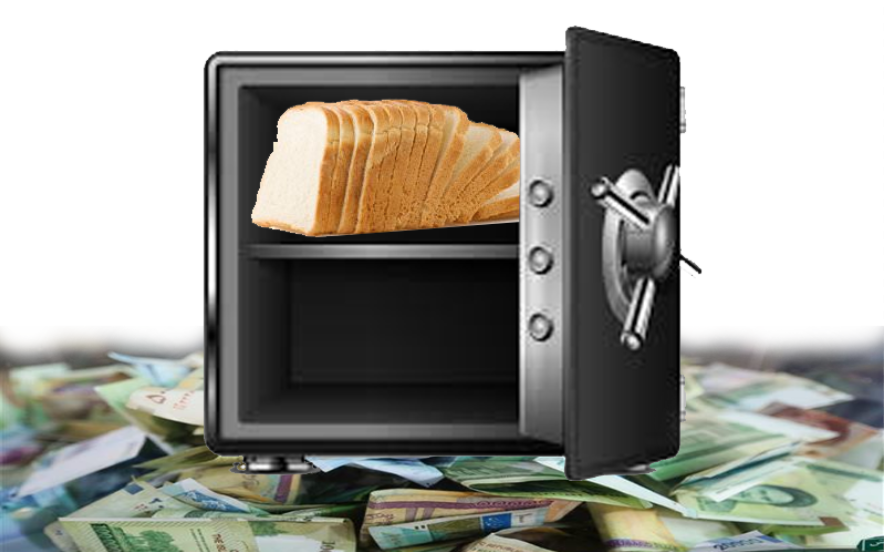 Given the high-prices, Iranians save their essential goods like bread in safes rather than saving valueless banknotes

These days, officials employ concealing policies once again. In tandem with the spread of news about raising the bread price, the administration’s spokesman Ali Rabiei denied the issue. However, on April 20, citizens in Tabriz, northern Iran, received an SMS alerting them that prices of different kinds of bread have risen between 39 to 50 percent. Maragheh and Ajabshir cities were later added to Tabriz.

Rabiei previously announced that the rate of flour price will not change. However, bakers in Tabriz said that “The price of flour has increased from 1,700 to 2,800 tomans per kilo and they have no choice but to raise prices.”

The regime-linked Director-General of Grain and Commercial Services in East Azarbaijan province Esfandiar Abolhassani claimed, “The price of bread did not raise, it has just organized.”

“Due to the imposition of costs, bakers gradually reduced the volume of the dough, and as this process continued, the size of the bread became smaller and smaller, and in practice, there was no bread, so we had to organize the price so that the volume of bread would not be smaller,” Abolhassani added.

However, it seems that the regime’s agent forgot that the people are under the shadow of the coronavirus and they cannot earn for months. Additionally, citizens did not receive any support on behalf of the regime, which prefers to waste national resources on adventurous projects like testing ballistic missiles under the cover of launching a satellite.

In fact, these inhuman measures not only would not open a breathing space for the regime’s bankrupt economy but would also lead the society to demonstrate their ire against the entire regime. Equality, in November, hikes in the gasoline prices ignited countrywide protests that immediately engulfed about 200 cities in all of Iran’s 31 provinces.

In this respect, as the regime’s officials constantly issue warnings about the volatile condition of the society, the post-coronavirus era would be accompanied by intensive protests and uprisings that threaten the religious regime’s survival.

Why Did Iran’s President End the Quarantine and Ignore the Catastrophe of Coronavirus Expansion?

Another Child Suicide in Iran; Reza Had No Hope