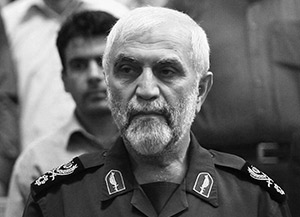 The Associated Press points out that Hamedani was a key figure in Iranian involvement in the Syrian Civil War, and a major point of connection between Damascus and Tehran. A report by the National Council of Resistance of Iran elaborated by saying that Hamedani was the senior-most IRGC figure operating in Syria at the time, and a deputy to General Qassem Suleimani, the high commander of the Quds Force, which is responsible for foreign operations.

The NCRI also adds that on average Hamedani dispatched 50 fighters at a time from Syria to Iran, where they underwent one month of training as part of the Iranian regime’s increasingly sophisticated effort to safeguard the embattled government of Syrian dictator Bashar al-Assad. In its report on the incident, NCRI spokesperson Shahin Gobadi said that the death of Hamedani clearly demonstrates the depth of Iranian involvement in the Syrian crisis.

Earlier in the week, multiple reports emerged indicating that it was Iranian officials and particularly Qassem Suleimani who spearheaded the effort to bring Russia directly into the conflict. Russian airstrikes appear to be focused on moderate rebels favored by the West, and may thus help to drive the multi-party conflict closer to a stalemate among Assad loyalists, moderate rebels, Islamic State militants, and Kurdish forces.

Indeed, a BBC report on Friday quoted Ahmad Naqibzadeh, a professor of international relations at Tehran University as saying that Russia’s airstrikes benefit Iranian foreign policy specifically because they raise the likelihood of all parties coming to the negotiating table without precondition, an outcome that might force the US to drop its demand that Assad step down ahead of any political resolution to the conflict.

In a larger sense, this Russian involvement challenges a formerly familiar situation of US dominance in the world. And this, according to the BBC report, is “something Iran’s hardliners have dreamed of for decades.” Furthermore, this prospective outcome speaks to concerns that have been periodically cited by Western analysts regarding the development of an Asian bloc comprised of Iran, Russia, China, and minor allies and focused on challenging Western interests in the Middle East and throughout the globe.

The BBC suggests that the tightening of alliances among Iran, Russia, Syria, and Iraq may go a long way toward explaining the intensification of Supreme Leader Ali Khamenei’s anti-Western rhetoric. It was reported this week that Iran’s leading cleric and ultimate authority in all matters of state had declared negotiations with the US to be never in Iran’s interests and to be forbidden in the wake of the nuclear deal. Iran News Update indicated on Thursday that Iranian hardliners appear to be in the midst of broad-ranging efforts to isolate Iran from any possibility of progressive or Western influence. Russian support for Iran’s foreign policy may facilitate this.

But this is not to say that analysis of Russia’s impact finds only benefits for the Iranian regime. Indeed, that Russia’s involvement in Syria reflects the deepening of Iran’s involvement as well. And as the death of General Hamedani indicates, this brings with it additional risks of Iranian losses. This same observation is arguably support by the numerous reports on Friday that as many as four Russian cruise missiles went off course en route to Syria and landed in Iran instead.

In addition to pointing out that Hamedani’s death indicates the depth of Iranian involvement, Gobadi, the NCRI spokesperson, went on to say that it also points to the costs that the regime will incur if it continues that involvement. Noting that the Assad regime was expected to have fallen early in the civil war if not for Iranian support, Gobadi suggested that Tehran is still fighting a losing battle. “It is becoming more evident that after four years of crimes and massacres in Syria, the clerical regime’s strategy there has run aground and is facing serious defeat,” he said.