The missiles in question are intended for short-range use, in contrast to the ballistic missiles that have been steadily developed by the Islamic Revolutionary Guard Corps in recent years, to the consternation of the US and other Western critics. The 2015 Iran nuclear deal between Iran and six world powers does not address the issue of Iran’s arsenal of potentially nuclear-capable ballistic missiles, but a companion resolution by the United Nations Security Council calls upon the Islamic Republic to avoid all such work.

Nonetheless, the IRGC has continued development, production, and test-firing of these weapons ever since, in a clear sign of the escalating tensions between the Iranian regime and the nations it describes as “enemies.” Those tensions seemed poised to worsen this week after the Trump administration announced the end of sanctions waivers for importers of Iranian oil, approximately two weeks after designating the IRGC as a foreign terrorist organization. Iranian officials responded with a fresh outpouring of anti-Western rhetoric, and Supreme Leader Ali Khamenei appointed an ultra-hardline officer as the new head of the Revolutionary Guards, signaling persistent defiance and the expectation of more open confrontation.

Notably, IranWire predicted on Tuesday that Hossein Salami’s leadership of the IRGC would be characterized by “more missiles and a more hawkish approach.” In his previous role as deputy commander, Salami developed a reputation for hostile speeches mainly targeting the US and Israel, and “he repeatedly asserted the necessity of increasing the missile and defense capabilities of the Islamic Republic.” These same positions can be expected to exert even more influence over the actions of the hardline paramilitary, and Salami’s contributions to Iran’s military buildup would likely extend beyond the field of ballistic missiles into other, more traditional weapons development.

In this sense, the Press TV announcement of forthcoming mass production arguably reflected upon the ultra-hardline turn that Khamenei promoted through Salami’s appointment. While ballistic missiles have been a centerpiece in Iranian antagonism of the West, these other missiles have also long been considered essential to Iran’s strategy for any future confrontation with a superior military force. The IRGC has variously teased its “swarm tactics,” whereby US warships would supposedly be overwhelmed by small but fast moving military equipment, including attack boats and helicopter-mounted missiles.

Yet this strategy was not explicitly identified in the Press TV report. This is not to say that no threat against the West was intended, but only that the Iranian regime is generally voicing its threats in a somewhat veiled fashion. This same phenomenon can arguably been seen in the recent remarks delivered by Foreign Minister Javad Zarif in a United Nations session at the Asian Society in New York. 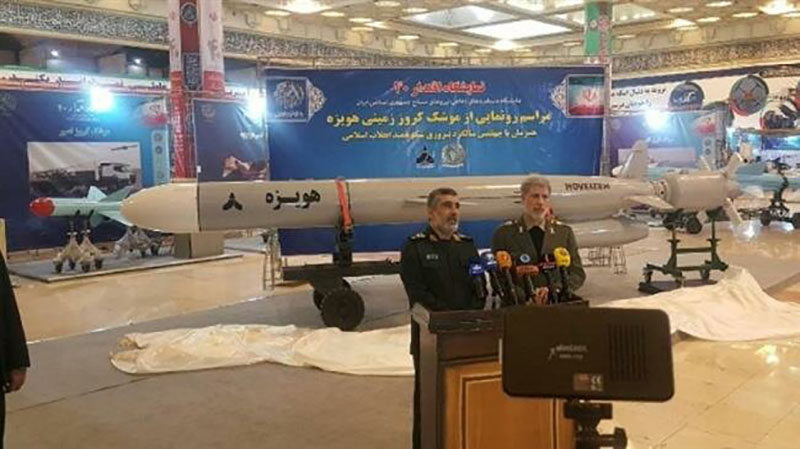 Zarif was very explicitly defiant of the US on topics such as economic sanctions, stating for instance that the Iranians “have a PhD” in evading the enforcement of such measures. But on the topic of prospective conflict between Iran and the US, Zarif was more evasive. His remarks to that effect began by saying of US President Donald Trump, “I don’t think he wants war.” But he went on to say that he could be “lured into one.”

This stated was apparently made in reference to hawkish advisors inside the White House, but Zarif’s overall remarks were sufficiently vague as to invite the interpretation that his government is only trying to maintain plausible deniability about its own intentions. Reuters referred to some of those remarks as “somewhat cryptic,” specifically identifying a portion of the foreign minister’s speech in which he said that some people could “plot an accident” in order to precipitate a regional crisis.

Though the meaning of this phrase was not clear, it was arguably made alarming by Zarif’s further statements asserting that Iran would not under any circumstances back down from its positions in Iraq and Syria. The Trump administration has insisted upon the regime’s withdrawal of forces from the broader region as a prerequisite for the removal of economic sanctions. But not only has Tehran consistently rejected this out of hand, it now appears to be welcoming a more serious confrontation.

As the aforementioned Press TV article put it: “While asserting that its military power is deterrent in nature, Iran has invariably defended its inalienable right to enhance its military prowess against potential regional and extra-regional intrusion.” This seems to blur the line between self-defense and force-projection, pre-emptively denying that Iran would be responsible for any conflicts that emerge beyond its borders, regardless of the regime’s own actions.