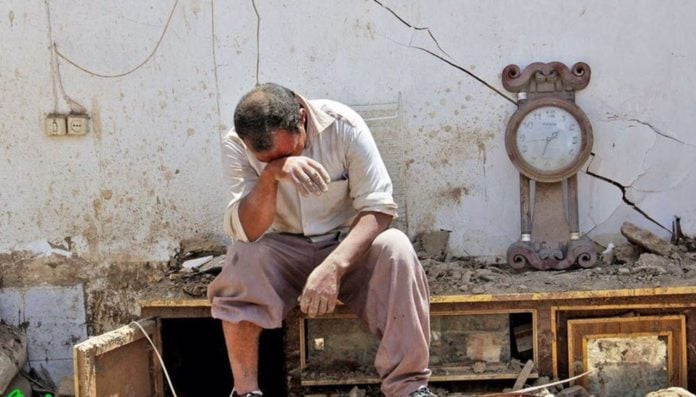 He said: “There are a number of people who have spent two nights in open fields and have taken refuge in the mountains. They have nothing and the helicopters that go in those areas only give them a few packages of food.”

He called for food, water, tents, and warm clothes to be sent to the area and argued for roads to be reopened.

Floodwaters have so far devastated vast areas on Lorestan and Khuzestan provinces, with reports of 200 deaths and hundreds of injuries. In fact, 10 villages in just one district of Khuzestan are underwater, despite the fact that the main floodwaters have yet to reach the province.

There has also been extensive damage to roads and canals (estimated at $60 million), as well as to 70,000 hectares of agricultural land in Kermanshah. Although the monetary value of the disaster is still being assessed, officials said that $1 billion has been lost from the agricultural sector across 12 provinces.

Worse still, the suffering is set to continue with more rain forecast and the Regime’s aid efforts sorely lacking.

He wrote: “Mr Rouhani! Lorestan is on the verge of a disaster. Poldokhtar has slumped into mud. The basic needs of the people including food, water and medicine have not been provided. Disorder and lack of planning are extensive. Organizing this situation needs national management and a large budget. The situation will not be managed with weak provincial management and donations.”

Mohsen Rezaee, a senior conservative politician and former IRGC commander, warned that water needed to be released from Karkheh Dam in Khuzestan before it overflowed or “a big tragedy [could] happen”.

While an official from Dez Dam said water is entering the dam at over 3,000 cubic meters per second, which indicates a massive threat of floods still to come.

It says something that even the regime’s senior officials are forced to acknowledge the massive destruction and their failures in helping the people.