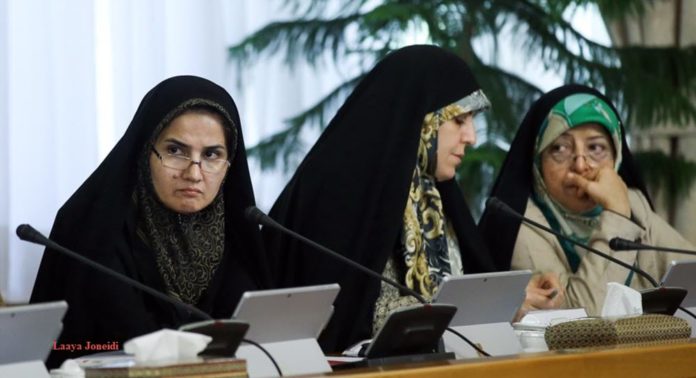 The president’s reelection campaign had doubled down upon the moderate image of his first campaign, effectively rebranding him as an all-out reformist and leading some of his supporters to anticipate significant changes in the first weeks after his reelection. Prominent among these expectations was the appointment of female heads of cabinet ministries. Rouhani had explicitly promised to bring more women into government, and no women have served in cabinet positions since the 1979 Islamic revolution.

But following apparent consultation with the hardline Supreme Leader Ali Khamenei, who is the ultimate authority in all matters of Iranian policy, President Rouhani appointed only male Shiite Muslims to all 18 cabinet positions. Women were appointed only to two vice presidential positions, which wield very little influence. And the significance of even these appointments was arguably diminished when it was reported that Joneidi, the vice president for legal affairs, had begun wearing a highly conservative chador, despite having previously been in the habit of wearing only a loose head covering, or hijab.

Wearing the hijab is legally mandated for all women in Iran, but the AP report notes that wearing anything less concealing than a chador – a long, loose-fitting, one-piece garment that leaves only the face exposed – is still considered a taboo among Iranian female politicians. The change in wardrobe is being regarded as a further sign of the presidential administration’s capitulation to pressure from hardline authorities, and it is made worse for reformists by the fact that Joneidi reportedly made the change specifically at the request of President Rouhani.

This enforcement of hardline standards, coupled with the lack of female representation in the new administration, casts serious doubt upon any notion that Rouhani might have pushed back against escalating pressure on secular or feminist social pressures. Under his first term, Rouhani was already widely criticized for inaction in the face of the announcement of harsher enforcement of the female dress code and other fundamentalist Islamic laws. This escalation included the deployment of larger numbers of undercover “morality police” in public areas, leading to sometimes violent arrests and public harassment.

Last week, Iran Human Rights Monitor published two videos on its website depicting Iranian women being physically assaulted and forced into vans by female agents of the “Guidance Patrol.” The text accompanying the videos explains that according to the Iranian government’s own figures, an average of 2,000 women are apprehended in cities throughout the Islamic Republic for violations of the mandatory dress code. Once detained, these women face up to two months in jail, plus a cash fine, and the possibility of receiving 74 lashes.

These videos appeared around the same time it was reported that Iran’s Education Ministry had released a list of ailments that disqualified people from working as teachers. The list as a whole simply illustrated a strange preoccupation with physical appearance and what might be called genetic undesirability. The original publication of this list by FARS News Agency pointed out that teachers spend more time on medical tests than they do on training.

But some items on the list provide still further evidenced of institutionalized sexism, insofar as infertile women and women with facial hair are among those who are barred from pursuing careers in education. According to EuroNews, the criticism of this list on social media prompted a response from President Rouhani. But of course the seriousness of his administration’s commitment may be widely questioned in the wake of broken promises regarding other criticism of hardline policies and practices.

Nevertheless, many of those women have participated in social media campaigns to secretly violate the female dress code, and many others test its boundaries, sometimes leading to their apprehension by the Guidance Patrol. The Associated Press pointed to this trend in its reporting on Laaya Joneidi’s adoption of the chador. But that story adds to the perception that such progressive social pressures have no analogue within the Iranian political establishment, which remains dominated by hardliners who face little to no serious challenge from self-described moderates and reformists like President Rouhani.