This article is a part of a series of posts about the Iranian supreme leader “Ali Khamenei’s Economic Empire” that explores the real scope of national resources seized by Khamenei-affiliated companies when Iran is in severe need to counter natural and manmade crises like the novel coronavirus.

The Execution of Imam Khomeini’s Order (EIKO), otherwise known as the Executive Headquarters of Imam’s Directive, or simply Setad [headquarters in Persian], was launched on April 26, 1989, based on a two-paragraph order issued by Iran’s first Supreme Leader Ruhollah Khomeini.

In his order, Khomeini appointed three of his aides Habibollah Asgaroladi, Mehdi Karroubi, and Hassan Sane’s to manage, maintain or sell properties confiscated or abandoned during the chaotic years following the 1979 Islamic Revolution.

In other words, Khomeini ordered his aides to implement Article 49 of the Islamic Republic Constitution, which granted the right to the government to seize all abandoned wealth and spend somehow they expedite.

“The government had the right to confiscate all wealth accumulated through usury, seizure, bribe, embezzlement, robbery, gamble, and misuse of endowments, contracts, and government trades, sale the deceased’s lands, holding corrupt centers, and other illegal means, and return it to its legitimate owners; and if those owners could not be identified, entrust it ‘to the public treasury,’” Article 49 says.

Notably, the Setad reportedly resorted force to confiscate several properties belonged to political dissidents and ethnic and religious minorities like the Baha’is. “Out of around 10,000 cases studied by the Setad in the past 17 years… around 50 percent were relevant to Iranian Muslims who departed the country… and parts or whole of property were confiscated because they were abroad,” Baztab website wrote in November 2013.

Therefore, we can roughly estimate the real wealth of the EIKO by digging into Article 49. Of course, the real scope of EIKO’s capital still remains a secret because there is no information about undocumented properties that have been confiscated by Setad’s directors.

Up to 1994, there are no details about this organization’s functions and resources. However, the current Supreme Leader appointed Mohammad Shariatmadari, a co-founder of the Ministry of Intelligence and Security (MOIS), as the CEO of Setad. Three years later, Shariatmadari was replaced with Mohammad Javad Iravani.

Irvani’s tenure lasted ten years until when he was replaced with Mohammad Mokhber in 2007. Mokhber’s overseeing of this organization coincided with fundamental changes. “Setad’s wealth in Property Section amounts over $51.706 billion,” announced Aref Nowruzi, the director-general of EIKO’s Property Section, in 2008.

“With reforming the EIKO’s structure, this complex turned from a property-sale company to an economic stream. The Tabligh economic group possesses five subsidiaries, including construction, oil, energy, industry and finance, and Intelligence and Communication Technology (ICT). In the new structure, traditional properties convert to new investments in modern fields,” said Nowruzi in March 2010.

First, the judicial section under Gholam-Hossein Mohseni-Eje’i, first deputy of the judiciary chief, is tasked with ending up controversial cases in line with EIKO’s privileges, according to Article 49.
In this respect, EIKO managed to confiscate belongings and estates of dissidents who had to flee due to judicial cases and life risks.

However, Setad’s main part is its economic arm. This arm had not been registered as a Non-Departmental Public Body (NDPB). Furthermore, the Parliament (Majlis) did not mention EIKO as an NDPB in its July 20, 1994 bill.

Subsidiaries of the Economic Arm:

– Tadbir Industry and Mine Development Company includes two mine companies.

– Noandishan [Innovators] Cultivation and Industry Company possesses three major companies that are active in the agriculture and livestock sectors.

This group control 14 percent of the country’s medicine market. It also manages 10 hospitals in different cities across Iran.

The foundation also built a pharmaceutical industrial town with an initial investment valued at $160 million. Moreover, it has an insurance company named “Barekat Insurance,” which is active in car insurance, property insurance, personal insurance, position insurance.

“The little-known organization, called Setad, is one of the keys to the Iranian leader’s enduring power and now holds stakes in nearly every sector of Iranian industry, including finance, oil, telecommunications, the production of birth-control pills and even ostrich farming,” Reuters noted.

This company had collected the people’s endowment and charities poured in holy shrines and invested the capital in profitable sectors. Given the mismanagement and corrupt cases, the government declined its economic aid to the company, leading Rey to collapse.

However, in late 2010, Reyshahri was sacked and the company allocated to EIKO. Since then, this company has acted as an EIKO subsidiary and implemented Setad’s policies.

TEACO’s managing board claims that this is a private company led by Iranian investors. However, EIKO appoints the managing board members. This company is considered the parent of dozens of companies led by officials’ children (Aghazadeh).

Since July 2010, given EIKO’s involvement in nuclear or ballistic missiles activities, the European Union sanctioned Mohammad Mokhber, who headed Setad.

In this context, in addition to EIKO, the government uses TEACO and its subsidiaries as front companies to circumvent sanctions. Since December 2010, EIKO transferred a significant number of its Central European-based companies to TEACO. Most of these companies are managed by dual-nationality directors. For instance, Reyco was a German subsidiary for Rey Company. There are no public relations between Reyco, Rey Investment Company, TEACO, or the Iranian government.

Mannesman Cylinder Systems Company brevity MCS International GmbH is a German company. The company was on the verge of collapse. However, EIKO purchased the company and converted it to a gate for investment in Europe.

LTD Cylinder Company is a Croatia-based company. In October 2010, EIKO changed its managing board and transferred the company to the TEACO complex. LTD Cylinder invested in European companies to facilitate EIKO’s trades.

One Vision Investments 5 (Pty) LTD Company is a South Africa-based company had led by Rey company. However, EIKO transferred it to the TEACO complex to cover its ties and facilitate its money transferring and trades through a South African lifeline.

One Class Properties Company is another South Africa-based company that EIKO uses for covering TEACO’s relations with Tehran.

The next piece will focus on the Mostazafan Foundation, another pillar of Khamenei’s empire of wealth. 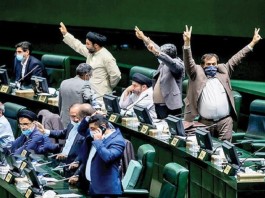