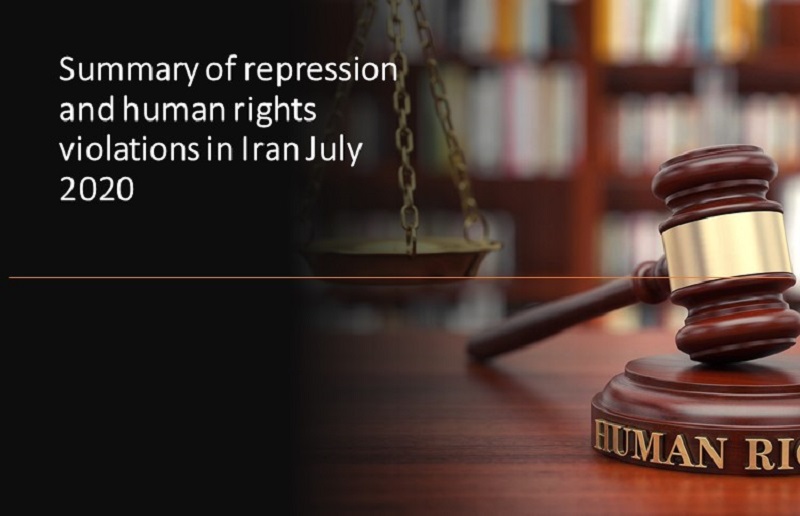 Among the executed prisoners, two political prisoners were executed on charges of moharebeh.

Among the executed prisoners, two were executed for espionage.

Among the executed prisoners, one was executed for drinking alcohol.

The motives for the executions were moharebeh, espionage, drinking alcohol, murder, drugs, and rape.

During July 2020, 811 arrests were reported and recorded. Here are the details of the arrests.

In July 2020, 660 people were arrested under the headings of illegal hunting, propaganda for massage studios, and shooting at environmental forces, by the rangers, law enforcement, intelligence agents and the police for the so-called “Enjoining good and forbidding wrong.”

In July 2020, eight Baha’is and Christian converts were arrested by security forces.

In July 2020, 30 people were arrested on charges of embezzlement, bribery, fraud, and disrupting the foreign exchange market.

In July 2020, we received a small number of reports of repression and torture of prisoners in the clerical regime’s prisons.

Shahin Mostafavi was taken to the prison yard by two guards in Bukan Prison, where he was severely beaten and tortured, and in several areas, his bones were broken. As a result of the beating, a tooth, nose, and platinum that had previously been in the prisoner’s pelvis due to a fracture were broken.

Tohid Amjad, Ahmad Amjad, and Omid Amjad, who are brothers, were beaten to death in Urmia Central Prison, by the prisons’ special guard.

Alireza Farshi and Behnam Sheikhi, civil activists in Evin Prison, were severely beaten by security forces during their detention.

Ebrahim Armesh, Mohammad Nazarian, Jalal Jafari, and Payam Jijuni, who took part in the Behbahan protests, were beaten and tortured at the Behbahan Intelligence Office.

Amir Hossein Moradi, a political prisoner on death row in Greater Tehran Prison, has been denied medical treatment despite suffering from kidney disease.

Hossein Silavi, a political prisoner sentenced to death in Sheiban Prison, is denied immediate medical care and access to medical services despite his poor physical condition.

Alireza Alinejad, a political prisoner in Evin Prison, has been denied medical treatment despite a severe ear infection and pain.

A female prisoner in Tabriz Central Prison, despite severe physical problems, is deprived of being sent to a health center and hospital. (Name has not been identified)

Sajjad Sadeghi, a radio presenter, and expert was sentenced to 74 lashes in Tehran.

The sentence of 74 lashes of Ahmad Reza Haeri, one of the defendants in the “Black Thursday of Evin” case, was carried out by the Tehran Security Police.

The sentence of 72 lashes of Fouad Enayati, one of the detainees in October 2019, was carried out in Sanandaj.

In July 2020, a number of Kolbars, merchants, and civilians were killed by the direct fire of the Border Regiment, IRGC, and police forces.

Ziad Esbati and Ebrahim Abu Bakri two Kolbars were killed in the border areas of Chaldoran and Piranshahr by direct fire from the Border Regiment.

Shamzin Ahmadi a Kolbar, who was wounded in the abdomen by three bullets fired by IRGC agents in the Soma region of Urmia, died eight days later.

Vazir Mohammadi a Kolbar, 29 years old, was killed by a close-range shot fired by the Border Regiment at the heights of Meleh Ghandi Nosud.

Reza Pourasmail Kolber, 29 years old, was shot dead by the Border Regiment at the Chaldoran border.

A shepherd was shot dead by IRGC forces on the border of Sardasht-Iraq.

A 17-year-old man was wounded in a police shooting in Omidiyeh and died the next day.

17-year-old Wahab Shahozi was shot dead by Delgan city police while he was at his work as a free taxi driver.

A prisoner named Ismail Totazahi, who was shot in the leg by police, died a month later in Zahedan Central Prison from an infection caused by a gunshot wound and a delay to send him to the hospital.

Monireh Bahrami, a prisoner in Qarchak Prison in Varamin, committed suicide in prison.

Seyed Omid Mousavi, one of the detainees of the November 2019 uprising, committed suicide in the Greater Tehran Prison.