Given the mullahs’ known non-transparency, now the world is skeptically tracking what is happening inside the country. On March 12, the Washington Post reported that “Iranian authorities began digging a pair of trenches for victims just days after the government disclosed the initial outbreak. Together, their lengths are that of a football field.”

The Washington Post’s website published several satellite images as “Evidence of unusual activity at a cemetery near where the infections emerged… At the Behesht-e Masoumeh complex in Qom… According to expert analysis, video testimony and official statements, the graves were dug to accommodate the rising number of virus victims in Qom.”

In this respect, several Iranian officials complained of the regime’s secrecy over the death toll of the deadly virus. For instance, Mostafa Faghihi, the owner of Entekhab news agency, declared the real casualty figure of COVID-19 is more than 2,000 cases. He slammed the Health Minister Saeed Namaki for concealing the genuine stats, saying, “Mr. Namaki, don’t you want to announce the real statistics of the coronavirus deaths? OK, I will do your job… Dear Iranian people! The number of Coronavirus suspected fatalities is close to 2000 in the country (ten times the official figure). More than 130 people died in Tehran and Gilan only yesterday. Mr. Namaki, don’t add salt to people’s wounds!” 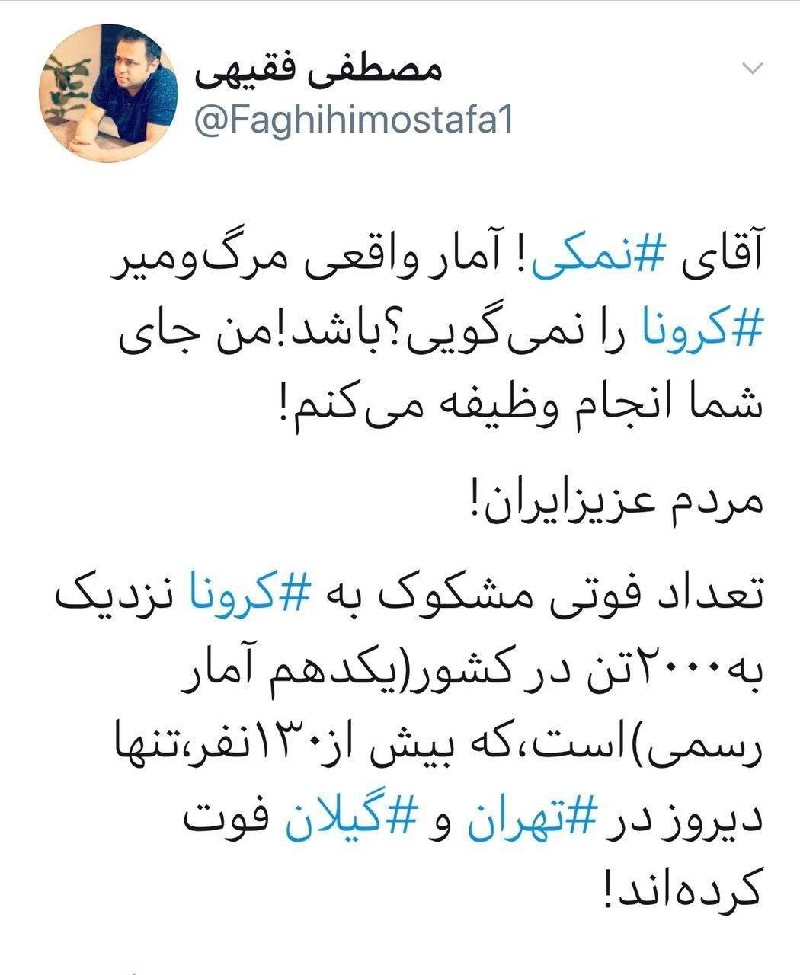 However, he later put his revelation aside under pressure and claimed, “The statistics I released a few hours ago were incorrect… My emphasis was on suspected coronavirus (infections), which could be flu or any other disease!”

Nevertheless, Faghihi wasn’t the sole Iranian figure who challenged the official figures over the coronavirus crisis. “There is no place in the cemeteries… the statistics are not real,” said a member of Parliament from Gilan province, Jafar Imanzadeh, on March 8. These samples have proven that the oppressive and censorship apparatus of the regime are excessively continuing their function against dissidents despite the deadly virus outbreak.

Abbas Abdi, an advocate of the regime’s so-called reformist president Hassan Rouhani, exposed the mullahs’ inability in containing and resolving the novel virus crisis. “Worst of all, given the pace of the epidemic expansion, the country’s governing system cannot reach it, especially, [while] the system lacks the specified strategy and faces the most extreme rift in its domestic structure,” the state-run website Etemad Online quoted Abdi as saying on March 9.

Biological Attack or Preparation for Crackdown on Protesters?

The corona spread and concerns over the relevant events to it have compelled the supreme leader Ali Khamenei to make more public remarks pursuing to control the situation. Last week, he ridiculously urged the people to pass the current state by “praying” and not “overestimating” the virus.

He, however, ordered the chief of Staff for the Armed Forces Mohammad Bagheri to form a health and treatment base, according to the evidence about a “biological attack!” The claim obviously showed that the people’s apathy toward his plea for praying and not overestimating the virus.

What Is Khamenei’s Purpose by Referring to a “Biological Attack?”

Iranian authorities, particularly Khamenei as the main decision-maker of the regime, well realize that the chain of concealing and secrecy, non-transparency, and escalating economic problems have left the society on the brink of collapse. Therefore, they should be awaiting a new round of protests anytime. In this respect, Khamenei issued the first order for preparation over the upcoming protests under the excuse of a health and treatment base against the coronavirus.

As a result, the regime pursues to simultaneously respond to two crucial problems that are possible to distrust even forces loyal to the system’s principles. Khamenei is factually covering up the reason for keeping the people in dark about the emergence of the disease for weeks on the hand, and non-quarantine of Qom as the epicenter of the illness on the other hand. Additionally, he is organizing the regime’s troops for confronting the public wrath under the banner of health and medical issues. However, the “biological attack by the United States” is so ridiculous that several of the regime-linked individuals mocked him for these unreasonable claims.

“What’s up to the U.S. that we succeed in cutting off the chain of the coronavirus outbreak? There is no relation with the U.S. if we could mobilize our all potential and urge the people to help us for curing the patients, and keep suspicious people in their homes,” the state-run website Ensaf News quoted the deputy of the parliament speaker Massoud Pezeshkian as saying on March 12.

Furthermore, many MPs recently revealed shocking stats about the fatalities of the COVID-19 in various provinces. The propaganda apparatus, of course, censored all these news regarding the mullahs’ panic of igniting the people’s anger against their mismanagement and criminal hoarding of the necessary medical items.

In this context, the regime recently issued an instruction that banned all institutes and individuals from the publication of the figure of those infected and mortality cases. The mullahs claimed that the stats will only be published by the counter coronavirus headquarters. Meanwhile, the regime’s cyber police have threatened the people over-reporting the death toll saying, “The culprits will be pursued.”

However, the mullahs’ concerns display the readiness of the society for another round of revolt against the rulers, who practically put the people’s lives and health at risk due to their 40-year corruption and wasting the national resources in irresponsible foreign policies, in addition to boosting the oppressive apparatus.

Iran: Behind the Curtain of Borrowing

Friend and Supporter of the Iranian Resistance, U.S Senator Harry Reid Has Passed Away