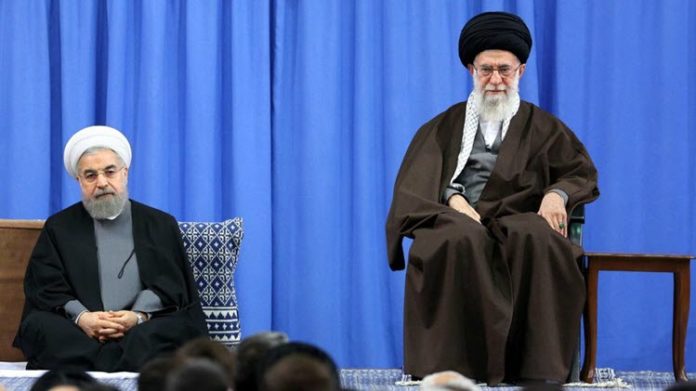 The Supreme Leader, Ali Khamenei and his faction were furious upset by Mogherini’s ‘embarrassing’ selfies with some members of Majlis (parliament)
because they see it as yet another step toward succumbing to the West.

Khamenei is not against rapprochement with the West and enjoys the economic windfalls that came with the nuclear deal with the six world powers-P5+1 group.

In his article for The American Thinker, Reza Shafiee, member of the Foreign Affairs Committee of the National Council of Resistance of Iran, writes, “Where does Rouhani stand in all of this? It is simple: He wants a bigger share power and wealth for his faction, that which was formerly Akbar Hasheimi Rafsanjani’s when he was around. Rafsanjani was Rouhani’s mentor. Now in his absence, Rouhani tries to fill his shoes but he is no match for the current Supreme Leader’s might or his powerful arm, the Revolutionary Guards (IRGC).”

During his first term, Rouhani oversaw more than 3,000 executions. According to Iran’s main opposition group, the National Council of Resistance of Iran, last month 101 prisoners were hanged. NCRI’s statement revealed, “The majority of those executed were young, including two men, aged 24 and 27, who were hanged in public in Torbat Heydarieh; a 25-year-old woman in Babol; a 24-year-old man in Kerman, two 26-year-old men in Zahedan, a 28-year-old man in Zabol, and another 28-year-old man in Gohardasht, Karaj.”

Rouhani refused the responsibility by saying they were carried out according to “laws” and laws were handed down by the parliament.

In its latest report, Amnesty International stated,“Iran vilifies human rights defenders as ‘enemies of the state.’” The report also says that under Rouhani’s first term human rights abuses have intensified in an unprecedented rate. “Iran’s judicial and security bodies have waged a vicious crackdown against human rights defenders since Hassan Rouhani became president in 2013, demonizing and imprisoning activists who dare to stand up for people’s rights,” Amnesty International said.

Further, citizens in Iran must endure indignities like the lack of decent drinking water. Ordinary citizens have lost their life savings to banks set up by IRGC commercial conglomerates. There are frequent power outages especially in the Southern Iranian provinces such as Khuzestan, where the heat is scorching. Ethnic, religious, and all other minority groups are suppressed, and protests have engulfed the country.

Iranian regime officials are now facing public criticism on the 29th anniversary of the mass execution of 30,000 political prisoners in the summer of 1988. When an audio tape was leaked by the son of the late Ayatollah Hossein-Ali Montazeri’s in August 2016, it revealed that Montazeri, the handpicked successor of Khomeini, publicly objected to the mass executions of 1988. He spent the rest of his life under house arrest, and died in 2009.

The audio tape also highlighted that Rouhani’s main challenger in the May presidential election in Iran, Ebrahim Raisi, was a member of “Death Commission” responsible for handing down sentences to execution. Iran’s main opposition, People’s Mojahedin Organization of Iran (PMOI/MEK) launched a massive awareness campaign in Iran during the May elections. Raisi stood by his role in the massacre, and asked to be decorated for his crimes.

Ahamd Khatami a Friday Prayers’ leader, and a Khamenei’s confidant, said, “Then we see some people who on their websites switch the place of martyrs and murderers. It was a divine move by [Iranian regime founder Ruhollah Khomeini] to force the [PMOI (People’s Mojahedin Organization of Iran)] out of the country. All those who acted based on these orders should be rewarded with medals… however; those who on their websites have switched the place of martyrs and murderers should repent and beg for forgiveness.”

It is unlikely that Hassan Rouhani will change course during his second term in office. Shafiee writes, “He has been an active participant and a decision maker since the 1979 revolution. He has demonstrated his resolve for pleasing the Supreme Leader every step of the way. Rouhani quietly nags Khamenei for a bigger share of power which is often misread by some in the West as a sign of outright defiance to IRGC or the Supreme Leader. Moderation in Iran’s ruling mullahs has been an illusion created by those in the West who want to have a bigger share of Iran’s market.”

Holding those responsible for accountable for their human rights record, must now be addressed.