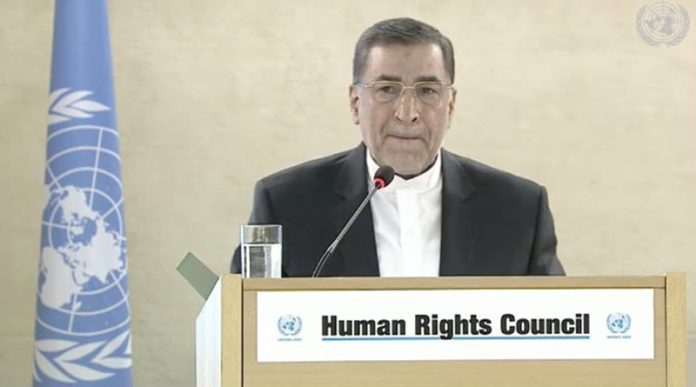 “Renewing the mandate of the special rapporteur will send a strong signal to the Islamic Republic that the international community is watching and expects the government to produce tangible improvements,” said CHRI’s executive director. The organization also highlighted a number of specific problem areas that had been identified by the latest occupant of that UN post, the recently deceased Asma Jahangir. These included political imprisonment, forced confessions, executions of juvenile offenders, discrimination against women, religious and ethnic minorities, and so on.

Coinciding with the CHRI statement, AFP reported that the imminent opening of the Human Rights Council session had itself become the focus of protests against Iranian human rights violations. This is because the list of speakers for that session included Iranian Justice Minister Alireza Avaie, who is under sanction by the European Union and Switzerland for participation in multiple human rights violations.

The AFP noted that exiled member of the Iranian Resistance had identified Avaie as a key player in the massacre of political prisoners in 1988, which reportedly claimed upwards of 30,000 victims. Accordingly, Resistance activists are leading efforts to organize protests outside of the UN headquarters in Geneva on Tuesday, when Avaie is scheduled to speak.

These general calls for international action on Iran’s past and present human rights violations were accompanied by statements on the particular human rights crises that are ongoing in that country. For instance, the UN’s Office for the High Commissioner on Human Rights released a document on Friday which called attention to the regime’s recent targeting of environmental activists. The statement cited multiple UN human rights experts as saying it is “hard to fathom” how such individuals could be portrayed as spies.

The crackdown on environmentalists make international headlines earlier in the month when it was reported that at least 10 activists, including at least two dual nationals, had been arrested and accused of espionage. One of these, the Canadian-Iranian founder of the Persian Wildlife Heritage Foundation, Kavous Seyed-Emami died in custody and was dubiously portrayed by Iranian authorities as having committed suicide after confessing guilt.

The OHCHR statement says, “Mr Emami’s death is extremely disturbing. Not only was he arrested on flimsy charges, but his death in custody strongly suggests foul play. The Iranian authorities must urgently allow a prompt, impartial and effective investigation into the circumstances and causes of Mr. Emami’s death.”

But many critics of the Iranian regime reject such appeals for internal Iranian investigations as naïve and impractical. The Islamic Republic has a long history of covering up its human rights abuses, a fact that was highlighted by the CHRI statement when it made reference to the Iranian judiciary’s “High Council for Human Rights,” which consistently issues public denials of reported human right violations, rather than investigating or directly addressing them.

The same conspiracy of silence was also the subject of a report published by IW on Monday regarding the 2003 death of another Iranian-Canadian, Zahra Kazemi. The report notes that an advisor to Iranian President Hassan Rouhani made the unusual admission that the Iranian Intelligence Ministry knew that she was not a spy, and also that her death could have been avoided if she had been given medical attention after receiving the injury that later caused her to die from a cerebral hemorrhage.

Although this statement from then-Intelligence Minister Ali Younesi acknowledges past wrongdoing, it breaks with years of false narratives about Kazemi’s death, including false narratives that had been presented in reports signed by Younesi himself. Furthermore, there is no evidence that the alteration of his story might be embraced by other officials, much less that it will spread to other instances of Iranian human rights abuses. In fact, the crackdown on mass protests in December and January of this year showcased the regime’s persistent suppression of information.

Initially, judiciary officials insisted that only a few hundred Iranians had been arrested as a result of those protests, but subsequent information leaks necessitated that these figures increased over a period of weeks, ultimately topping out around 4,000. However, the National Council of Resistance of Iran maintains that the actual number of arrests exceeds 8,000. The organization has also called attention to 50 shooting deaths in the midst of the protests, and a dozen subsequent deaths from torture.

The regime’s use of torture in this latest crackdown does not appear to be in dispute, but the still-emerging details suggest that the full scope of these incidents is not yet known. A principal reason for this is the regime’s ongoing intimidation not only of dissident activists but also of their families. A report published by CHRI on Saturday provided one specific example of this phenomenon, noting that the civil rights activist Mahmoud Masoumi had been beaten and given electric shocks after his arrest in January, but his family had not filed a formal complaint out of fear they would face reprisals.

Masoumi was released eight days after his initial arrest but was later re-arrested and has been held incommunicado in Evin Prison since February 1. This is indicative of the fact that crackdowns on the December/January uprising are ongoing. And that fact is also true of separate crackdowns on other activist movement including the environmentalist movement.

According to Radio Free Europe / Radio Liberty, the Iranian judiciary announced that three more environmental activists had been arrested on Sunday. Judiciary spokesman Gholamhossein Mohseni-Ejei provided little detail about those arrests but once again linked them to vague accounts of “infiltration by the United States and Israel”.

These arrests were preceded last week by at least two more arrests of participants in the “Revolution Street” campaign against Iran’s forced veiling laws. This was the subject of another RFE/RL report on Friday, which included video of one such protester being violently shoved off a utility box by a police officer, where she was standing with her hijab held at the end of a stick in imitation of dozens of other such demonstrations over the past two months. IW took up the story on Monday and reported that the woman had suffered a fractured knee as a result of the assault and had been denied access to medical treatment by arresting officers. The same report finds that all of the women known to have been arrested as part of this campaign have been beaten while in detention. At least one of these cases is now being handled by the Security Court, suggesting that these protesters, like the environmental activists, could soon be prosecuted for espionage and made subject to particularly harsh sentences.

However, the IranWire report also points to encouraging public reactions to the protests and crackdowns. Social media users have reportedly begun using the hashtag #IfIAmThere to announce ways in which they plan to protest protesters against abuse by authorities. Such trends recall attention to various media commentaries on the January mass uprising which suggested similar protests would ultimately emerge in response to regime’s violent repression. On this view, international actions like the renewal of the special rapporteur’s mandate may be seen not only as pressure on the Iranian government but also a sign of political cover for Iranian activists themselves.