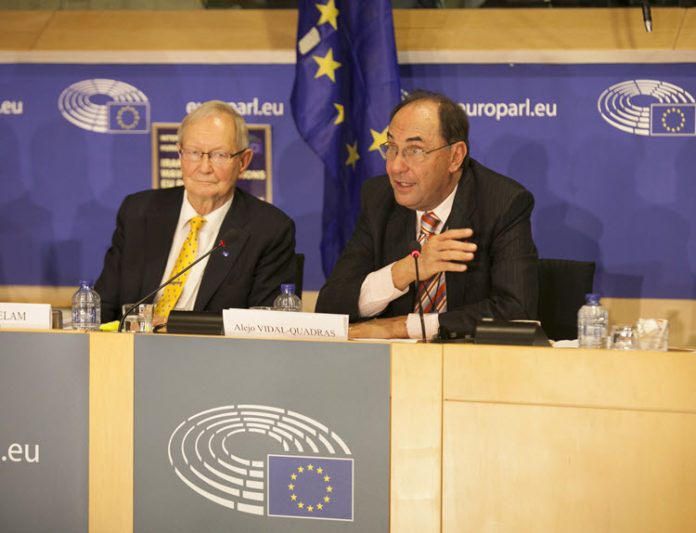 Maryam Rajavi was the keynote speaker.  She is the Iranian opposition leader, and the President-elect of the National Council of Resistance of Iran (NCRI). She was joined by the former Italian Foreign Minister, Giulio Terzi, as well as a young female former political prisoner, Shabnam Madadzadeh, 29, who spent 5 years in prison and has recently managed to leave Iran.

A number of MEPs from various European countries spoke at the event.

Mr. Alejo Vidal-Quadras, President of International Committee in Search of Justice (ISJ) and former vice president of the European Parliament was an attendee.

Mr. Vidal-Quadras called the state of human rights in Iran “deplorable”. He made a few short points regarding that statement:

1. His first point regards the European Union policy towards the Iranian regime. “Since the current High Representative, Federica Mogherini, took office two years ago, the position of the European External Action Service in relation to dictatorships that violate human rights has weakened. And its voice has sounded on too few occasions and too low.”

He said that in her trips to Tehran, and her meetings with Iranian officials, the issue of human rights has not been properly addressed. He alleged that her friendly attitude toward people directly involved in “thousands of executions, systematic torture and all kinds of abuses against human rights and civil liberties, people that in fact should be taken to court for crimes against humanity, is a moral discredit for herself, and for the European Union in its role as promoter and defender of the values of the open society in the world.”

One of three brothers who hold key positions in the regime, Javad Larijani, is head of the Iranian Human Rights Committee. “I propose they change the name,” Mr. Vidal-Quadras said, quipping that it should be called “The Anti-Human Rights Committee”. Mr. Vidal-Quadras continued,  “Mr. Larijani has recently returned a letter to Mrs. Mogherini asking her to prevent opposition activities in Europe and broke the democratic rights of the PMOI and the NCRI in exposing the crimes of the Iranian regime. For instance, this meeting, he has asked Mrs. Mogherini to forbid that we should be here. I think he’s not very familiar with the institutional structures of the European Union.”

“Larijani is being so cynical as to present the Iranian regime, one of the most bloodthirsty regime of our times, as a victim of human rights violations itself.” Mr. Vidal-Quadras criticizes Larijani over his complaints about the “Free Iran” gathering last July where the Iranian opposition was joined by over 100,000 participants in Paris. “Many of us were there with Mrs. Rajavi enjoying this fantastic event, and he has complained about this gathering. The same man that strongly defends the massive use of death penalty against political opponents and human rights activists, is the one that criticizes a democratic and peaceful event in favor of regime change in Iran,” Mr. Vidal-Quadras said.

2. His second point spoke to the systemic violation against human rights that cannot be considered an internal matter of the country. “These practices of the Iranian regime have penetrated neighboring countries beyond Iran’s borders. This is a regime that is extending the crimes that have been committed in its own country in the past 30 years, to other territories, such as Iraq and Syria. The regime’s brutal behavior, mainly the massacre of the summer of 1988, and many more atrocities, have never been brought to justice. The export of terrorism and fundamentalism, meddling in internal affairs with other countries in the region, the implementation of the same policies of oppression and suppression that exist inside Iran to the hull of the Middle East. Once again we must insist that there is a solution despite all difficulties.”

Mr. Vidal-Quadras called for a regime change as the solution that will transform Iran into a sound democracy, using to the 10-point plan proposed by Maryam Rajavi and the Iranian Democratic Opposition. “This is what European governments and the European External Action Service and Mrs. Mogherini should aim to, instead of wasting their time trying to appease a regime that will never give up his hegemonic power of the Muslim world to impose on it its fanatical aggressive and regressive totalitarianism. Thank you very much,” he concluded.