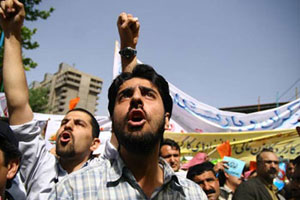 The news agency pointed out that Rajavi insisted that Iranians tend to recognize their government as the “godfather” of ISIL and of Islamic militants in general, regardless of the ongoing sectarian conflict between Iran and ISIL in Iraq and Syria. Rajavi’s overall testimony served to call for regime change in Iran as a major step toward combating Islamic fundamentalism and affecting positive change in the region as a whole. And the NCRI consistently indicates that the Iranian citizenry is firmly behind this goal.

As such, a statement on the organization’s website called upon workers across Iran to use International Workers’ Day on May 1 as an occasion to “rise and topple the mullahs ruling the regime.” The statement went on to catalogue various offenses of the regime, including the costly foreign policies and economic mismanagement that have contributed to a situation in which wages have shrunk along with the volume of industry and production, while the rate of inflation, the gap between rich and poor, and the risks faced by ordinary laborers have all risen precipitously.

The International Campaign for Human Rights in Iran adds that 70 percent of the Iranian workforce is currently living below the poverty line. The activist organization also reported on Thursday that the regime recognizes the symbolic threat posed by May Day and as such had begun early efforts to crack down on demonstrations and expressions of dissent before they could manifest.

The Campaign noted that at least five labor leaders had been arrested two days before the holiday. The organization’s executive director, Hadi Ghaemi indicated that this reflects the regime’s tendency to view any sort of mobilization as a national security threat. One might argue that this same tendency suggests the NCRI is accurate in its assessment that workers and the Iranian people are keen to organize in favor of immediate regime change.

In any event, both the NCRI and the International Campaign point out that the regime’s crackdowns on any sort of organizing have not been sufficient to fully suppress the people’s will to demonstrate their dissent. In recent weeks this has been particularly evident in the case of Iranian teachers who have been protesting for an improvement in their wages and living conditions, and who have not ceased to protest in spite of the detention of several leaders of the Iranian teachers’ union.

With this situation ongoing, the NCRI has issued a separate statement through its Education Committee specifically urging teachers and their students to keep up their protests and to participate in broader demonstrations anticipated for both May 1 and May 8.