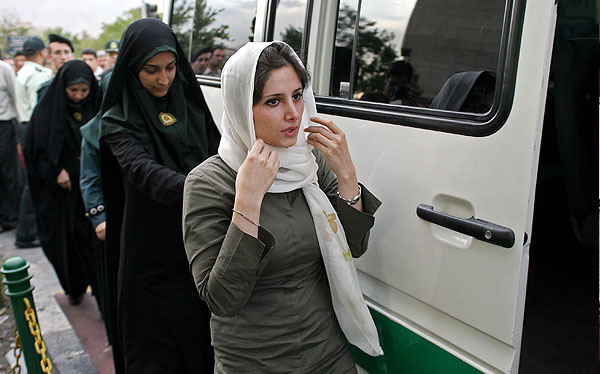 This criminal act follows recent protests by 300 students in Jahrom University where they protested against the suppressive measures in the university.

Women in Iran Under Clerical Rule

Iranian women in the 1979 revolution played a main role in support of freedom and democracy in Iran.  Soon after mullahs hijacked this movement to establish the most feudal and inhuman religious dictatorship of the past century by eliminating every legal right and privilege women had gained over the years.  Women officially became Iran’s second-class citizens.

Along with discriminatory policies against women, they are left reeling even further with recent all-male decisions.  In July Tehran’s mayor, Muhammad Bagher Ghalibaf, ordered gender segregation in municipal offices to ensure women’s “dignity”.  Two months later Khalil Helali, a national police chief, said the law should ban women from serving in cafes and restaurants because such jobs allow men to ogle them, although allowing them to work in kitchens and non-public areas.  Also in the main tourist city of Isfahan, female musicians have been banned from performing. (1)

The essence of the debate over women’s issues in Iran is the clergies’ unease with the idea of Iranians seeking freedom and democracy that threaten the regime.  Women were instrumental in the overthrow of the Shah regime, and who now display their opposition to the current regime’s religious fundamentalist policy.  Women are rejecting a government campaign for them to get married, stay at home.  Considering the current social and economic conditions in Iran, having a large family is not an option.

To further suppress and intimidate women, acid attacks have been carried out to limit their activities and socially alienate them.  Unofficial reports indicate 25 incidents of this nature have occurred to date.  Such attacks in Isfahan and other cities and towns have lead to street rallies and social media campaigns against these heinous acts.  The regime responded by launching an investigation into the assaults, leading to the arrest of several suspects who were then let go due to insufficient evidence.

Iranians believe that the clerical regime was responsible for these attacks.  In response, the latter enacted a parliamentary measure to protect the Basij, a paramilitary plain-clothes group, which enforces the country’s social intolerances under the supreme leader Ali Khameini and administered under the recently passed Plan on Protection of Promoters of Virtue and Preventers of Vice.

Protestors chanted that those who performed the acid attacks were more vicious than the Islamic State (ISIL) and brought attention to what the US administration should be aware.  First, a narrow focus on defeating and destroying ISIL does little to address the broader problem of militant fundamentalism in the Middle East.  Secondly, the Iranian government is complicit in these acid attacks and its policy of empowering most hard line elements of society only encourages its continuation.

Published medical reports have made Iranians fearsome that these attacks were organized and could be repeated, although Parliamentary members have denied this.  On October 21, 2014, members of Parliament made an amendment to the Plan that states, “No individual or group has the right to attempt criminal acts such as insults, libel, beating, injuring, or murder of others under the umbrella of ‘promoting virtue or preventing vice’”.  The amendment was carried by a majority vote.

According to sources, one victim has come forth to say the attackers belong to the notorious Ansar-e Hezbollah (Supporters of the Party of God), a gangster organization affiliated with the Supreme Leader, Ayatollah Khamenei.  Ansar’s origin as religious hardliners is traceable to the 1979 revolution with its involvement of beating and killing opponents to the emerging regime.  Its current affiliation with the terrorist organization Hezbollah in Lebanon has produced cells throughout Iran.  Funding and partial control of the group comes from high-level conservative religious leaders within the government, including Ayatollahs Khameini and Mesbah-Yzadi, for the purpose of carrying out government policy in both political and social spheres.

Ansar has a history of assaulting women on bicycles who were wearing “improper” clothing and were “badly veiled”.  In 2010, the Chief Prosecutor of Mashahd, Mahmud Zoghli, imposed a fine of approximately $1,300 for improper wearing of the hijab, which was confirmed by the Interior Minister and Chief of Police, Mostafa Mohammad-Naijar.