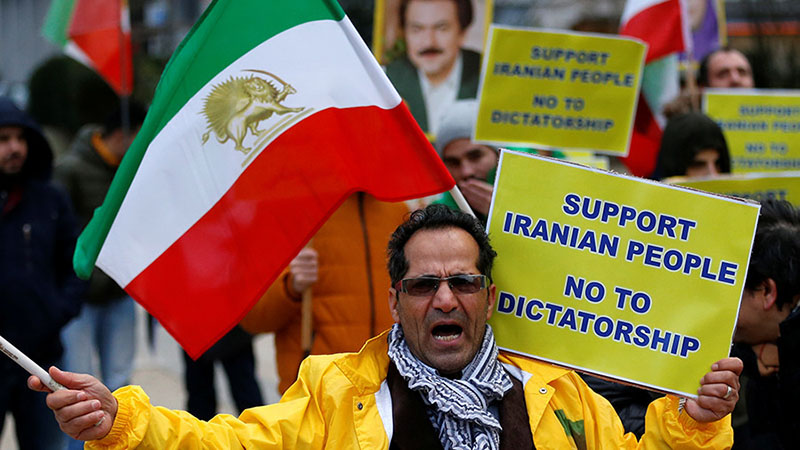 The deal was poorly drawn up and was extremely one-sided, to the benefit of the Iranian regime. He also turned a blind eye to most of Iran’s belligerence, even ignoring his own red lines, just so as not to jeopardise the nuclear deal.

However, the Trump administration took a very different strategy from the get-go. President Trump vowed very early on that he would not let the regime’s malign activities across the region go unpunished. He has toughened the U.S. foreign policy on Iran, re-imposed sanctions, issued fresh sanctions, pulled out of the nuclear deal and now pulled military reinforcements into the Gulf.

The pressure from all of this on Iran is immense, especially in terms of the economy that is continuing to deteriorate. However, very little attention is being paid by the international press to the domestic pressure that the Iranian regime is under.

At the end of 2017, society in Iran exploded. Mass protests and demonstrations across the country took place and the people made a very clear and loud call for regime change. The protests continued throughout 2018 and the Iranian regime could no longer dismiss the will of the people as being of a minority.

Earlier this week, a member of Majlis, the Iranian regime’s parliament, Elias Hazrati, spoke about the state of society during an open session. He warned his colleagues that the regime will soon face a major uprising once again. He emphasised that the desperate conditions, in particular the tough sanctions and the economic crisis, are the worst the country has had to face in recent years.

Hazrati said that the enemy’s goal is to destroy the people’s trust in the regime with this “horrific psychological war”.

Hazrati also spoke about the role of the opposition – the People’s Mojahedin Organization of Iran (PMOI / MEK) – in the current unrest. Once dismissed as having very little following both inside and outside the country, the PMOI / MEK is one of the biggest threats to the Iranian regime’s existence. It is the only viable alternative and it has support in every single province in the country, as well as massive support outside Iran. Hazrati acknowledged that the opposition is taking great steps forward in exposing the illegitimate regime.

The people of Iran will be the force behind regime change. The regime almost collapsed after a major uprising in 2009, but amid the silence of the international community, the regime managed to keep its grip on power. This time, however, will be different because the people are determined to experience freedom, human rights and democracy after the regime collapses.