In the span of 24 hours, Iranian retirees organized a widespread protest in at least 23 cities across the country. In addition to retirees, other citizens held six rallies to achieve their rights. Pensioners, medical staff, employees, workers, and firefighters held protests demanding their overdue wages.

The authorities, however, refuse to provide society’s needs and necessities while they grant national assets to terrorist proxies or fund their nuclear bomb-making projects. Iranian authorities have indeed imposed additional pressure on the people due to these destructive policies. On the other hand, they deny spending the country’s resources on purchasing the most necessary items such as credible Covid-19 vaccines for their political privileges.

Protesters rallied in front of the Parliament (Majlis) in Tehran and in front of local Social Security offices in other provinces. In their rallies, they chanted common slogans, blaming the regime and particularly President Hassan Rouhani for their unkept promises.

“My friends, since 2016, the government has approved the social security’s budget for us. According to the 2021-22 budget bill’s clause D of the second footnote of article 12th, [officials] must give us 900 trillion rials [$3.6 billion]. However, they found ten stakeholders for this 900 trillion while we would receive lower than 270 trillion,” said a protester in Khorramabad city.

“We don’t ask for anything extra either of the [Rouhani] administration or the [entire] state. We want our own wages, the money that has been accumulated, they should give this money to us,” the protester added.

Yazd province—contract health forces of Bafgh Medical Center held a rally in front of the Provincial Governorate. “We worked alongside official health forces. However, we gained the lowest rights,” protesters said.

“We, contract forces of the Health Center, demand an end to the discrimination against us in comparison to other employees… Our test was the coronavirus,” read their placard.

Western Azarbaijan province—locals of Qareh Varn village, southwest of Miandoab county, gathered around Zarrinehroud river, preventing contractors to load their trucks with the riverbed’s sands. They believe this project will destroy the environment and harm nature. In fact, they protested government apparatuses’ profiteering policies and donating natural resources in return for money.

Kohgiluyeh and Boyer Ahmad province—a group of oil employees and workers held a rally in front of the central bureau of the Oil Company in Gachsaran city. They protested employers’ failure to pay their paychecks and arrears. Protesters spread empty sofreh [Iranian traditional food basket] on the ground as a sign of their poverty and miserable conditions.

Yazd province—a group of contract nurses and medical staff affiliated to the Medical Sciences University held a rally, protesting the university’s unjust policies. They blame officials for their recruitment policies and discrimination in paying salaries and pensions. In their rally in front of the Provincial Governorate, they demanded to be officially recruited.

“We were your assistants during the coronavirus pandemic. Be our assistant in changing the conditions,” nurses and medical staff wrote on banners, demanding officials pay attention to their dilemmas.

Notably, according to activists’ recent reports, there were two more protests in the cities of Isfahan and Ahvaz on January 2.

Isfahan province—on January 2, a group of firefighters held a rally, protesting the regime’s policy about paying their salaries. In their protest in front of the central building of Isfahan Municipality, firefighters demanded the government change its method and give firefighters their fair salaries and pensions.

Khuzestan province—workers and employees of the Foulad (Steel) National Group in Ahvaz held a rally, protesting the appointment of new managers for these complexes. They complained to managers about establishing new deputies, including deputies of purchase, administration, and finance, human resources, technical, and operation. 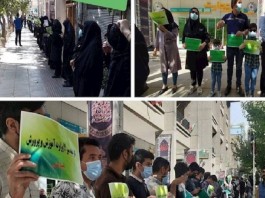 Roundup of Iran Protests in August 2021 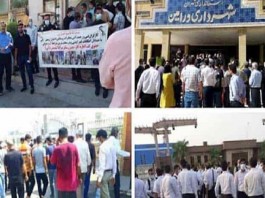 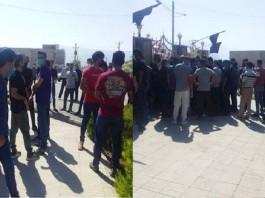