The meeting in Brussels coincided with another round of nuclear talks between Iran and P5+1 held in Vienna.

Rajavi cited the recent Tehran’s hysterical reaction to a European Parliament resolution, expressing grave concern over the violation of human rights Iran as an indication of the EP’s effectiveness.

“This reaction shows mullahs’ lack of capacity for change or moderation as it cannot survive without hangings, torture, warmongering and terrorism in the region,” Rajavi said.

She underscored: “Human rights is the mullahs’ Achille heels. Tehran’s hysterical reaction to European Parliament resolution censuring human rights abuses in Iran and cancellation of the planned trip of the delegation of mullahs’ parliament to Europe, are vivid indications of mullahs’ weakness and the myth of change in Iran.”

“The [Iranian] presidential elections were not held according to the democratic standards valued by the EU,” the EP resolution underscored.

Tehran summoned the Greek Ambassador, the sitting of EU rotating president, and cancelled a trip by a delegation of Iranian regime’s parliamentarians to Europe.

Rajavi criticized the policy of EU countries on Iran in the framework of “the policy of appeasement” and driven by “economic interests.” 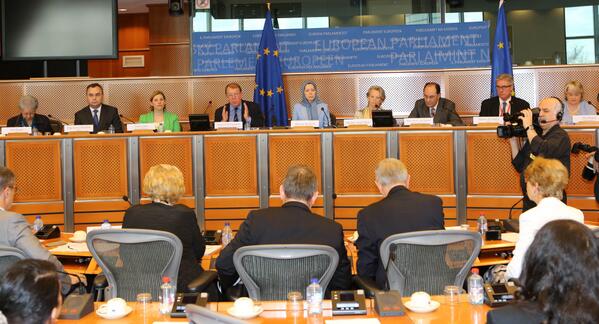 Members of European Parliament rejected the Rouhani’s moderate posturing and criticized Western inaction regarding the growing number of executions and suppression in Iran as well as the regime’s direct role in the bloodbaths in Syria and Iraq.

Stevenson said: “If the mullahs could have it their way, they would have hanged us right in the Schumann area. They want to dictate to us what to say, what not say, what resolution to pass, and what resolution not to pass. But I tell them: You are dead wrong. You cannot export your rule of fear, intimidation and censorship to here. We, who have been sent here by our people’s vote, decide what to say, who to listen to and who to ignore.  And that is why we have invited Mrs. Maryam Rajavi, the President-elect of the Iranian resistance to tell us about a different Iran; a democratic and free Iran. And I would say to Mrs. Ashton:  Is this the new moderate approach and face from Iran you wanted us to believe? It is a farce. It is simply a farce that fools no one here, unless one wants to be fooled.”

Rajavi pointed out that during the past two months, Supreme Leader Ali Khamenei had actively formulated a policy against the Geneva agreement. “Western countries must insist on shutting down nuclear sites and stopping uranium enrichment,” Rajavi underscored, adding,  , “any concession or appeasement by the West will enable the mullahs to obtain the bomb.”

The Iranian opposition leader warned that “Western governments must not sacrifice human rights and freedom for the sake of negotiations and their relations with the religious fascism ruling Iran.” She urged them to follow the EP’s April 3rd resolution which said “human rights dialogue with Iran should be part of the future policy framework of bilateral EU–Iran relations”.

Noting that the Iranian regime in collusion with the “puppet” government of Iraq had carried out a massacre at Camp Ashraf and launched missile attacks on Camp Liberty, Rajavi said that Iraq had “also intensified the restriction on food and medicine in Liberty” and was “paving the way for extradition of the PMOI members.” “The mullahs consider the PMOI as an existential threat and therefore Camp Liberty is their prime target,” she stressed.

Mrs. Rajavi urged EP to compel the EU to use its leverage to free the seven Iranian dissidents taken hostage in Iraq, resettle PMOI members in Europe and US,  and ensure the safety and security of the residents while still at Liberty by stationing UN observers at Liberty on a permanent basis. She also called for the launching of an independent investigation into the September 1 massacre at Ashraf.