Mrs Rajavi told the conference: “Last week’s hysterical rhetoric of the Mullahs in reaction to the EU resolution regarding the violation of Human Rights in Iran indicates that the issue of human rights is the Achilles’ heel of this regime.

“Ten months after Rouhani took office, the unprecedented number of executions and criminal massacres at Camp Ashraf and Camp Liberty prove that this government does not have the minimum capacity for reform and moderation. The solution is regime change. 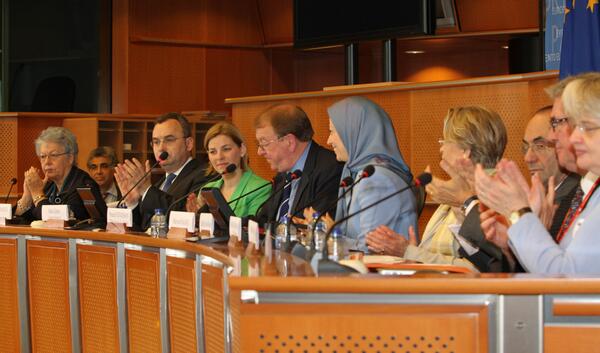 Speakers stressed that Iran has never abandoned its plan to attain the nuclear bomb, and that human rights abuses have worsened and executions have increased to 700 under president Hassan Rouhani.  The president also appointed a hostage-taker and a terrorist as the Iranian regime’s Ambassador to the United Nations.

The Iranian regime is also seeking to annihilate the organized opposition in Camp Liberty in Iraq, with the assistance of its puppet government in Baghdad.

The massacre of 52 PMOI members in Ashraf on September 1, 2013, repeated missile barrages on Camp Liberty, intensifying the medical blockade at the camp, repeated threats to extraditing these refugees and silence and inaction by the US, the UN and EU have all created a very perilous situation for these refugees, the conference heard.

Delegates and MEPs demanded the swift release of the seven Ashraf hostages, the transfer of all residents to Europe and the United States, protection and medical equipment at Camp Liberty and the permanent stationing of UN observers and Blue Helmet peacekeepers at the camp.

Back in July, the President-elect of the National Council of Resistance of Iran (NCRI) Maryam Rajavi gave an interview to the Washington Times about...
Read more
Iranian Opposition

On November 22, the Iranian diaspora took part in a twitterstorm, expressing their dismay over the international community's lack of action against Iran’s terror...
Read more
Iranian Opposition

The President of the National Council of Resistance of Iran (NCRI), Maryam Rajavi, has welcomed the United Nations’ adoption of a 67th resolution condemning...
Read more
Go to mobile version