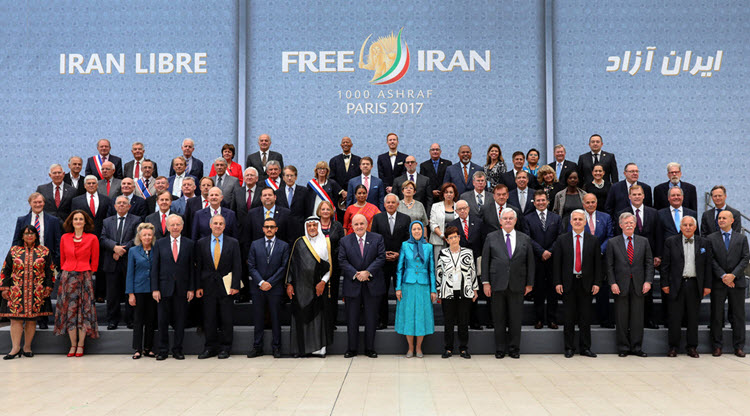 This panel discussion, held on June 30, was the first event of the Free Iran Gathering 2017, in which 100,000 people gathered to support the Iranian people’s call for freedom.

John Baird, the former Foreign Minister of Canada, said that he rejected the appeasement of the Iranian Regime which has been present in the West for many years now, specifically President Obama’s attempt to lift sanctions on the Regime in order to curtail their nuclear programme.

Joseph Lieberman, former US Senator and vice-presidential candidate, noted that the Iranian Regime continues to support terrorism, incite conflict in the Middle East, and violate the human rights of its own people.

Though Lieberman is a Democrat, he criticised Obama’s policy and hoped that Trump would make allies of the Iranian people and their organised resistance forces in the quest for peace in the Middle East.

Ambassador Robert Joseph, former United States Special Envoy for Nuclear Nonproliferation and the Under Secretary of State for Arms Control and International Security, emphasised that Iran is continuing to pursue nuclear weapons technology, in spite of the 2015 deal, and pointed to evidence from the National Council of Resistance of Iran (NCRI). He insisted that officials recognise the threat posed before the situation becomes too fraught.

He agreed that the Iranian Regime did not contain moderates and threw his support behind the opposition forces.

General Jack Keane, former Vice Chief of Staff of the U.S. Army, noted that the Iranian Regime sought to dominate the Middle East and praised Donald Trump for his attempts to reassure other Middle Eastern countries that the US would be on their side, especially during the Arab-American Summit in Saudi Arabia.

Bruno Tertrais, Deputy Director of the Fondation pour la Recherche Stratégique of France, said that many in Europe were under the impression that the Iranian Regime had moderates because they aren’t going in all guns blazing.

Tertrais said that this was much more a case of pragmatism, than of moderation. He stated that he believes that President Emmanuel Macron will put in place a robust policy against Iran.

The panel was moderated by Ambassador Lincoln Bloomfield, former Assistant Secretary of State for Military Affairs.