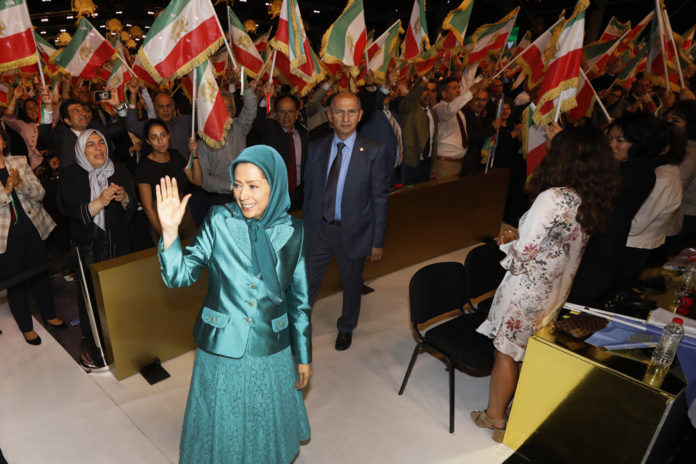 In the first piece, we will look at the speech by NCRI President-elect Maryam Rajavi.

Rajavi began her speech by praising the MEK for their quick construction of Ashraf 3, which was just “an empty piece of land” at the beginning of 2018 and now stands as a monument to the MEK’s determination, but she stressed that this is just a temporary camp and that the MEK’s final destination is a Free Iran.

Rajavi then reminded attendees that the Regime is petrified of being overthrown, which is why they work so hard to exterminate the MEK, from their missile attacks on the original Camp Ashraf in Iraq to the attempt to bomb MEK members at Ashraf 3 during New Year celebrations last year and at the Free Iran rally in Paris.

Rajavi says this intense fear of the MEK is a sign that the Regime is “in its final chapter” and will not escape “its inevitable downfall”. That why the Regime wants the policy of appeasement towards it to continue.

NCRI President-elect Rajavi pointed out that the Regime has claimed time and time again that if they were overthrown then there would be chaos in the Middle East, but she is quick to point out that that statement is untrue. For one thing, the Reim is causing chaos and for another thing, the MEK is ready and willing to take over until free and fair elections can be held in Iran.

Therefore, Rajavi pointed out, those claiming to appease the Regime in order to avoid war are at best misguided and that all those opposing war must “rise up to demand the overthrow of the mullahs’ regime”. She said that the policy of appeasement has heavy consequences and pointed out that the MEK has done so much to ensure peace in the Middle East. This includes:

• forcing a cease-fire in the Iran-Iraq War

• repeatedly blowing the whistle on the mullahs’ malign activities

Rajavi said that if the MEK had not done this, then the current situation would have been “radically different” and the mullahs would be “equipped with nuclear weapons” and have “created and solidified [their] empire and Caliphate”.

The MEK stopped the Regime from this and “left no future for the mullahs’ evil caliphate” but they paid a price.

NCRI President-elect Rajavi said: “The MEK has paid the price to break the atmosphere of fear and intimidation created by the velayat-e faqih and their criminal Revolutionary Guard Corps throughout its history by exposing the regime’s evil nature and its illicit activities, including the disclosure of the mullahs’ nuclear program, and by standing against this regime even at the price of their lives.”

Rajavi then praised the MEK Resistance Units in Iran, which showed how the Resistance is growing despite “pervasive repression” and that Ashraf has been replicated among the people.