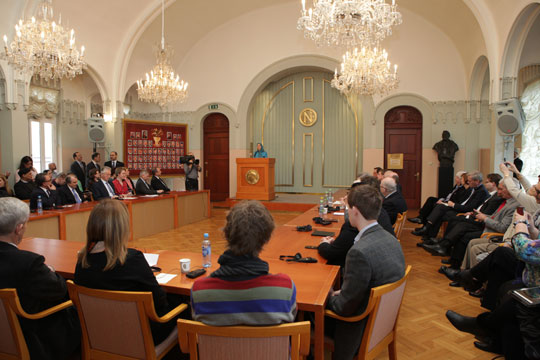 Ignoring human rights violations in Iran, the massacre of Ashraf and Liberty residents and the regime’s nuclear ambitions and meddling in the region sends a ‘destructive message’ to the mullahs in Tehran, a conference of the Friends of a Free Iran (FOFI) groups in Scandinavian countries heard. 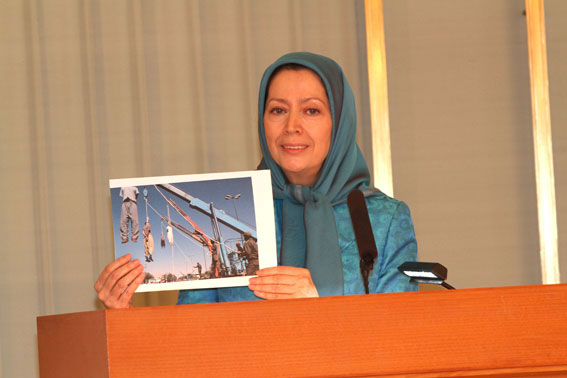 Iranian Resistance president-elect Maryam Rajavi also told delegates that new regime’s president, Hassan Rouhani, was not a moderate and the current regime had no capacity to reform.

She told the conference at the Nobel Institute in Oslo: “I said from day one that once the new president of the regime took office, expecting change without meeting the minimums such as freedom of all political parties, freedom of assemblies, freedom of the press, ending terrorist and fundamentalist meddling outside Iran especially in Syria and Iraq, and ending the nuclear weapons program, is a mirage.

“But in most of these issues, the situation has deteriorated.  Arbitrary and summary executions have dramatically increased and their numbers surpassed 100 in 2014 alone, and an unprecedented 600 during Rouhani’s presidency. 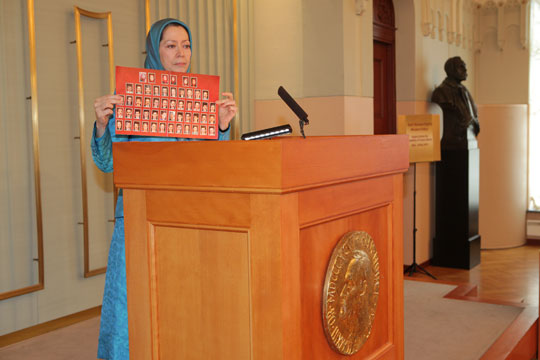 “It is indisputable that in the nuclear talks, the mullahs’ regime took a step back under pressure and agreed to the Geneva agreement. The regime was furious that increasing public dissatisfaction over the dire economic situation and international sanctions may lead to public uprisings against them.

“But reducing the sanctions and giving concessions to the mullahs gives them time to contain their economic crisis and suppress increasing public opposition while advancing their nuclear weapons projects.”

Mrs Rajavi also stressed that Security Council resolutions regarding the regime’s nuclear projects must be fully implemented.  Enrichment and the Arak heavy water project should be stopped completely and the regime must accept the Additional Protocol and allow unannounced inspections to take place, she said.

And a superficial condemnation by the UN of the killing of 116 Ashraf residents by Iraqi security forces, the kidnapping of seven and wounding of 1,375 more was ‘not enough’, she said.

Meanwhile no action to identify and bring to justice the perpetrators had been taken, and no security for Liberty residents had been provided, she said.

Speakers at the conference on February 24, entitled ‘Iran-Human Rights-Western Policy, Urgent Action for Residents of Camp Liberty’ also condemned mass summary executions in Iran and the regime’s meddling in the region that had accelerated since Rouhani took office.

The conference was attended by former Prime Minister of Iceland Geir Gerhard, Patrick Kennedy, Member of the U.S. House of Representatives (1995–2011), parliamentarians and politicians from Norway, Sweden, Finland, and Denmark.