Hundreds of protesters in Camp Liberty have refused to eat since September 1 when Iraqi forces attacked Camp Ashraf and executed 52 members of the People’s Mojahedin Organization of Iran (PMOI/MEK) and abducted seven residents.

Supporters of the Iranian Resistance have gone on hunger strike in Canada, UK, Australia and Swiss to support their demands.

Some 40% of hunger striker in Camp Liberty are suffering from blurred vision caused by not eating for 36 days. Also more than half of the protesters are suffering from muscular pains, dizziness, low blood pressure. Many have developed hearing loss.

A number of hunger stickers in cities in other five countries have been transferred to hospital for health issues caused by their lengthy protest.

Many international organization, political personalities have expressed their support for the demands by the hunger strikers.

In a number of other countries supporters of the Iranian Resistance rallied in solidarity with the protesters. 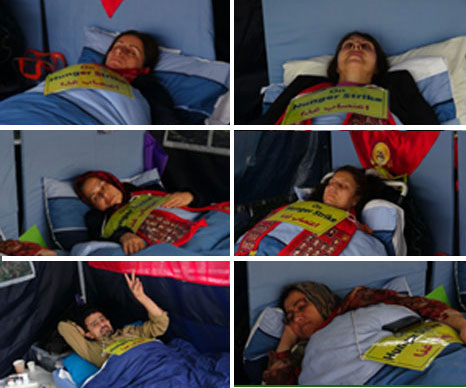